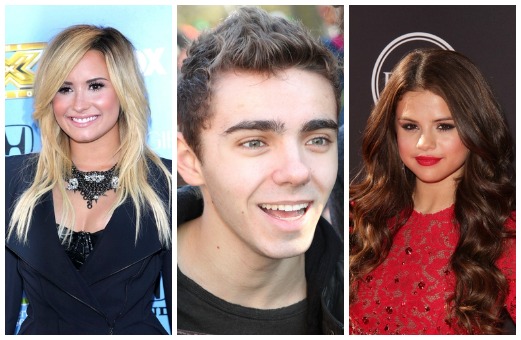 Is there a love triangle brewing in young Hollywood? Something you need to be doing Nov. 23 (aside from hitting up the early holiday shopping)? We’ve got the latest in Hollywood scoop below.

Ariana Grande might wanna keep an eye on her new beau. The Wanted’s Nathan Sykes recently revealed that before he fell for his new GF, he was actually crushing on Selena Gomez—that is until he thought about the wrath of Justin Bieber. “To be honest, I always liked Selena, but I really did not want to go that side because Justin [Bieber] would kill me,” the cutie was quoted as saying. Who do you think would makes a cuter couple: Nathan and Selena or Nathan and Ariana?

Mark your calendars! 1D gets a holiday

It’s about time if you ask us. Not only are we psyched for One Direction’s new album Midnight Memories to release Nov. 25, but this week we got even more excited when the band announced a very special way they’re going to celebrate. On Saturday, Nov. 23, the guys will be hosting a seven-hour live broadcast from LA, connecting the entire world of #Directioners. There promises to be celeb guest appearances, live chatting with fans, sketches with the band and even fan-generated videos. For more info on this awesome holiday, check out 1DDay.com.

See the very special announcement from the guys below…

Let’s just say the country star probably won’t be adding Lorde into her star-stuffed friend posse anytime soon. Reports surfaced this week that the “Royals” singer alluded to the fact that Swifty is just too perfect in a recent interview with Metro magazine, saying, “Taylor Swift is so flawless, and so unattainable, and I don’t think it’s breeding anything good in young girls.” Harsh! Luckily, the 16-year-old then took to her Tumblr page to set the record straight, saying, “I think I cocked that up a bit and what I said wasn’t put in context. What I meant was: there’s a lot of importance placed on physical perfection in this industry, and I wish my favourite stars didn’t look perfect because I think fans (me included) have these feelings of worthlessness, like they’ll never be as pretty/talented/whatever, as a result of this intense Photoshop culture.” Do you think Lorde has a point?

There’s no stopping Justin Bieber. The singer announced this week that he will be releasing a new song every Sunday at midnight for 10 weeks straight. Talk about a fun way to slash those Monday morning blues! “Heartbreaker” will be the first in his #MusicMondays series, premiering this Sunday, Oct. 6. We just wanna know if this new single is about a certain you know who.

Well not when it comes to his Dancing with the Stars scores, but the PLL cutie admitted this week that he actually had a frightening run-in after last week’s performance when he was mugged at gunpoint right outside his apartment. The thief made off with his gym bag, complete with his Latin dancing shoes. We’re just glad Brant’s OK and can continue focusing on his ballroom moves. Are you rooting for him this season?

You won’t believe the powerhouses she’s bringing with her, either. The X Factor judged announced this week that she’s hitting the road—and bringing GL’s cover girls Little Mix, as well as Fifth Harmony, with her. "I think it's going to be so much fun. There's nothing better than woman empowerment and having an all-girls tour," the starlet says of her upcoming Neon Lights tour, which is set to kick off in Vancouver Feb. 9. Tickets go on sale tomorrow, Oct. 5, so you better get planning!