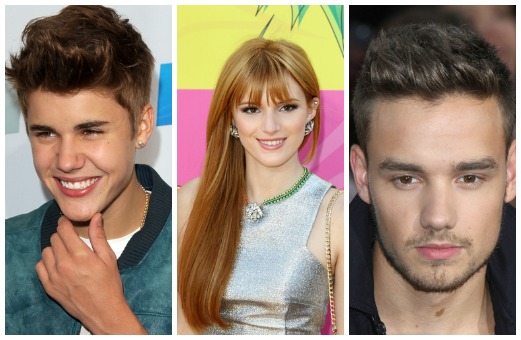 This week may have gone by slowly, but we have some juicy gossip that will make your Friday even sweeter. From vandalism to daring heights, these past seven days have been loaded with some mega OMG moments from our fave celebs. Who may be no longer in the USA and who got an Oscar nom? Read on to find out!

Is Justin Bieber about to crack? It’s no secret that the singer has been giving teens a bad rep lately. We were hoping 2014 might see a change in his ways, but we’re quickly questioning our hopes. The Biebs was wrapped up in one nasty prank against his neighbor this week when he allegedly egged his house, causing $20,000 worth of damage. Now sources are saying, if convicted and charged with felony vandalism, JB (who is currently in the US on a work visa) might be forced to pack his bags and head back to his native country. O, Canada. Who knew eggs could cause such trouble.

Earlier this week, One Direction’s Liam Payne was spotted standing on the edge of a skyscraper building, which caused a mega social media scare. We knew that he always dreamed of being a superhero but we never thought he would try this! Liam then took to Twitter explaining that what he did was “stupid and irresponsible” and encouraged fans to not attempt to do the same. At least we know he cares about the safety of his Directioners. Phew, that was a close one.

Our closet was shaken up a notch when news broke this week that our 2013 June/July cover girl Bella Thorne is now the new face for Candies only at Kohl’s 2014 campaign. Following the footsteps of celebs like Carly Rae Jepsen, Lea Michele and Britney Spears, we know that Bella is going to do an amazing job. Way to go, B!

The Golden Globe Awards aired this past Sunday and we are still thinking about what some of the best-dressed celebs wore. From Emma Watson’s fabulous red dress and black trousers to Mila Kunis’ metallic-esque gown, the show was loaded with some serious fashionistas. Who scored best dressed on your list?

Last year, Jennifer Lawrence took home an Oscar for her role in Silver Linings Playbook and this year she has the chance to win again! The Oscar nominees were announced yesterday and we were stoked to see that J. Law has been nominated for Best Supporting Actress for American Hustle. We’re totally going to be cheering our Katniss Everdeen on. Think she’ll score another win for a second year in a row—and maybe this time not trip up the steps? Be sure to tune in to ABC March 2 to find out.