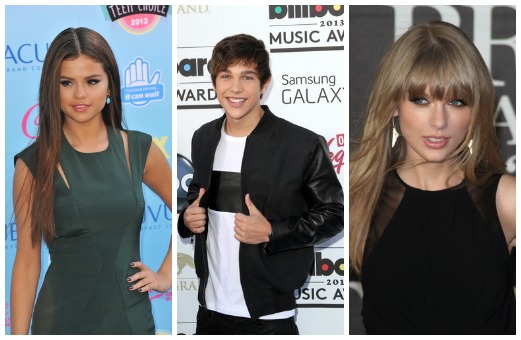 This week was full of dating rumors, award show announcements and so much more. Who isn’t dating who and who almost ruined their costume for a movie? Read our fave “OMG”-worthy celeb news of the week below.

Rumors have been circulating once again that Austin Mahone and Selena Gomez are dating. Us Weekly reported this week that it was Taylor Swift who allegedly played matchmaker for the two. And as much as we wish that were true, Austin was quick to shoot down such rumors, saying “We’re just friends. She’s really cool… I mean I think she’s really pretty.” Although they may not be dating now, it sounds like there’s some hope for the future. Do you think the two would make a cute pair?

The Nickelodeon Kids’ Choice Awards are almost here and it was announced this week that this years’ host will be (drumroll, please) Mark Wahlberg. Mark is the star of the upcoming fourth installment of Transformers, and we couldn’t be more excited to see him get slimmed along with some of Hollywood’s hottest stars. Don’t forget to tune in to the KCA’s on March 29th at 8 p.m. ET on Nickelodeon. Nominees for this year’s show are set to be revealed in the next few weeks.

The highly anticipated trailer for The Fault in Our Stars is finally here! A preview of the trailer aired on The Today Show this week, shortly followed by the release of the full thing. Let’s just say we’re def going to need an entire box of tissues to get through this flick when it hits theaters this June.

It’s no secret that Oscar nominee Jennifer Lawrence loves snacking, but who knew it could be so dangerous? It was revealed this week that JLaw loved to eat Doritos while on set for her latest award-winning flick American Hustle. Delicious, of course. But the Doritos’ dust actually stained one of her costumes! Fortunately, the costume designers planned ahead and had multiple dresses made. Sigh, yet another reason to love the real-life Katniss Everdeen.