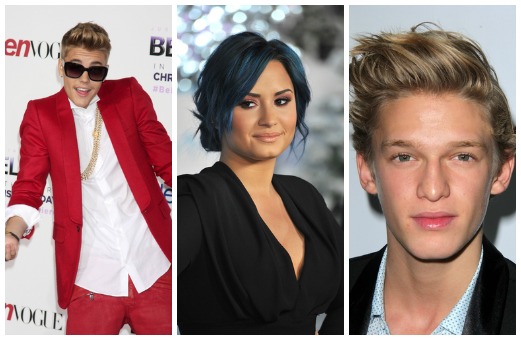 Phew! It’s been a busy week in Hollywood and it’s hard to keep track of all the exciting things that are happening. A new Dancing cast was revealed and someone got five minutes of fame. But that’s not all! Who got a drastic new ‘do and who is (finally) releasing their album? Read on to find out our top “OMG Celeb Moments” of the week.

Dancing With the Stars season 18 is about to begin and it’s going to be super hard to pick just one person to vote for. The show announced its celeb lineup this week on Good Morning America and it might be the best cast yet! Big Time Rush’s James Maslow and singer Cody Simpson are both taking on the challenge to see who can bop their way to the top. We’re also pumped to see Sochi gold medalists Charlie White and Meryl Davis take their moves off the ice and onto the ballroom—competing against each other on the show. Who do you think is gonna reign supreme this season? The fun begins March 17 at 8 p.m. on ABC.

The Oscars happened over the weekend, but everyone is still buzzing over the pizza guy who stole the show. We can’t imagine going from making deliveries to having Brad Pitt help pass out your goods. Host Ellen DeGeneres had the now infamous dude (who goes by the name of Edgar) on her talk show the next morning and gave us some insight into the guy. Word on the street is Edgar had no idea that he would be giving pizza to the likes of Jennifer Lawrence that night. In fact, he was under the impression he was delivering pizza to the writers backstage. His delivery didn’t go unappreciated—Ellen dished out a $1,000 tip for the delivery dude.

Check out Edgar’s Ellen interview below…

We all know that the love story between Justin Bieber and Selena Gomez has been on the rocks for the past few months, but the story has gotten even rockier since Bieber did the unthinkable this weekend. Justin apparently posted a pic of Selena at this year’s Vanity Fair Oscars party on his Instagram this past Sunday with the caption, “Most elegant princess in the world.” We agree with the Biebs that Sel looked gorgeous. And to jog your memory, it was this same Vanity Fair shindig back in 2011 where the duo made their first public appearance as a couple. But we don’t think his charming act went very far with the “Come & Get It” singer. According to reports she thought his move was “childish” and “stupid.” Ouch!

We’ve all been patiently waiting for Cher Lloyd’s new album to release, but apparently Cher can’t wait any longer. The singer posted a handwritten note on her Instagram this week that basically said she is tired of waiting and wants us to release her album! We are waiting on further instruction from Cher but we are super excited at the thought of hearing some of her new songs. Sorry I’m Late is expected to release in its entirety May 27. Better late than never, right?

The Neon Lights tour is in full swing, and from the pics and vids we’ve seen, it’s one for the record books. Demi Lovato is pulling out all the stops for this tour and giving her Lovatics the best of her abilities—complete with changing looks. Demi posted a pic this week of her hair on the floor, hinting that she got a major chop. Well, it was more than a haircut. Demi shaved off some of her hair, and let us be the first to say that she looks amazing! From blue to pink and long to buzzed, Demi can rock any style. What do you think of her new look?