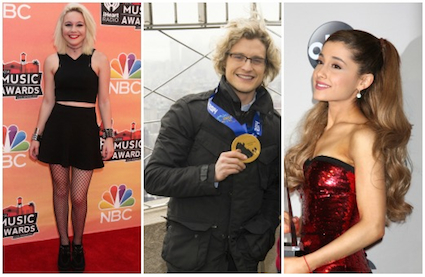 This week was full of sun, friends, and plenty of adventures. Summer is the perfect time to relax and catch up on the 411 from your fave celebs. There were tons of new shows and super fun events that happened this week. Who is tying the knot and what classic is getting a modern twist? Read on to find out!

More than a million people tuned in to watch the season 5 premiere of the hit show Pretty Little Liars this week, making it the No. 1 scripted telecast among women ages 12-34. But that’s not even the exciting part. Jaws definitely dropped when we learned this week that PLL has been picked up for a 6th AND 7th season. That means the gals (and tons of twists and surprises) will be ruling our TV through at least 2016. Are you happy with the news? If you ask us, we think this warrants a PLL movie. Just saying.

OK, everyone knows and loves the story of The Lion King. And we just learned that it’s making a comeback! The Lion Guard is a new animated spinoff set to launch as a TV movie in 2015, followed by a Disney Channel and Disney Junior series in 2016. The new series is going to be all about Simba and Nala’s second son, Kion. Kion wants to change the rules and, instead of putting together a team of lions, he enlists his friends to help preserve Pride Lands. This show will feature some of our past fave characters, like Timon and Pumbaa , but put a spin on the story dear to our hearts. We can’t wait!

Olympian and Dancing With the Stars veteran Charlie White has stolen the hearts of thousands across America with his all-star performances on and off the ice. But this week, we think many hearts were breaking when news broke that Charlie proposed to longtime girlfriend Tanith Belbin (not to be confused with ice dancing partner Meryl Davis). Charlie popped the question while the two vacationed in Hawaii, and their pics couldn’t be cuter. Team GL sends congrats to the happy couple!

Arlight, so we actually knew about this for a while…but we’re thrilled that we can finally share it with you. After making it big on The X Factor, Bea Miller is heating up. She announced to her 300k+ Instagram followers this week that she will be performing at this year’s Girls’ Life Fashion Bash! You heard that right, Bea will be here hanging out and performing her hit songs—and you’re all invited! RSVP here.

It’s no secret that Ariana Grande has one preferred hairstyle and rarely does anything new. We all love her look and that’s why everyone went crazy when she tweeted this week about the possibility of going (gasp!) blonde. Ari then uploaded a pic to Instagram of her wearing a blonde wig, but said that she’s not changing anything…. for now. We know that Ari will rock whatever look she decides to try out and will always stay true to herself, so we’ll welcome any ’do that comes her way.