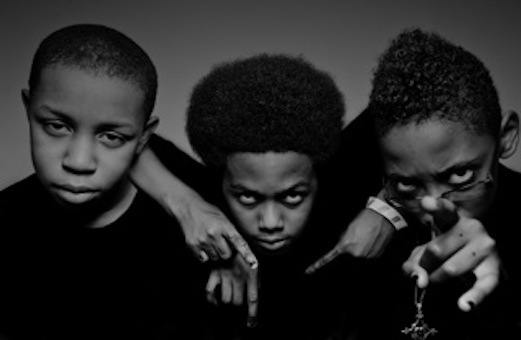 If you are a lover of Warped Tour and heavy metal music, we have some news that will make you very happy. Unlocking the Truth is a new boy band that, according to the NY Post, just secured a $1.8 million record deal with Sony—and that’s not even the coolest part.

Unlocking the Truth is comprised of three tween and teen boys from Brooklyn, NY (guitarist Malcolm Brickhouse, 13, bassist Alec Atkins, 13, and drummer Jarad Dawkin) and they’re changing what might be considered “normal” for heavy metal bands. Let’s put it this way: these cuties are playing to thousands of people before they even learn calculus, and we think that’s pretty cool.

The group was reportedly discovered thanks to YouTube, naturally, when a performance of them on a Times Square street corner went viral last summer. Since then, they’ve opened for Guns N’ Roses and most recently hit up the Coachella Music Festival circuit, with a slot on this summer’s upcoming Warped Tour. And once that’s all done? They’ll be heading into the studio to work on that five-album gig that just earned them some potential mega dough.

The boys' deal reportedly includes 16 to 17 percent in royalties and an initial $60,000 advance. But there’s a catch: They'll only see real money if their first album sells more than 250,000 copies.

We don’t think they’ll have a problem getting there. These boys are set to become the name to know and stardom is not out of their reach. For more info on these rising artists, CLICK HERE.

Are you already an Unlocking the Truth fan? Pumped for their album? Share in the comments below.