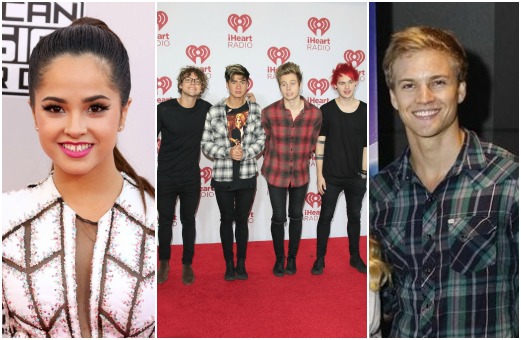 Another week has passed, which means we’re one week closer to winter break! While you’ve been trying to balance studying for tests with gift shopping and cookie baking, our fave celebs have been having some fun, too. From TV show additions to new talents, this week had it all!

Our past cover girl Becky G is making her way to TV! She’s been the breakout artist of the year and soon, she will be able to add “actress” to her long list of impressive talent. Becky revealed to her followers on Twitter that she will be guest starring in an episode of Austin & Ally next year! We can’t wait to see one of our fave singers join one of our fave TV shows.

Marshall Williams stole our hearts as Albert in Disney Channel’s How To Build A Better Boy. Now he is out to steal the show in Glee’s final season. Marshall took to Twitter and Instagram this week to announce the amazing news that he will joining the cast for Season 6. We already know that he can sing from his amazingly cute scene in HTBABB and his vids on YouTube, but we can’t wait to see how he sings among stars like Lea Michelle and Darren Criss. What do you think of the casting news?

After having to see what 5 Seconds Of Summer would be like without Ashton when he had to get emergency surgery, we hoped we would never have to just see three boys on stage instead of four again. Unfortunately, the band had to go on one short for their London performance this week. Michael Clifford reportedly lost his passport and was forced to stay in America while his best friends boarded the plane. Michael took to Twitter to tell fans what happened, and explained that they had every right to call him stupid. It seems like we weren’t the only ones who didn’t like the hiccup. In an interview, Ashton said that he “hated him not being there” and “it was the worst.” Let’s hope that Michael can get a new passport ASAP and be with the band once again.

Austin Mahone’s new book Austin Mahone, Just How It Happened: My Official Story hit shelves this week and we can’t stop talking about it. Austin gives his fans a more personal look into his life and how he shot to stardom. One of our fave things about the book? Proof that he is super grateful for all the support from his fans, friends and family. The biggest ‘awww’ worthy moment is how he dedicated the whole book to his mom—isn’t that the cutest?!