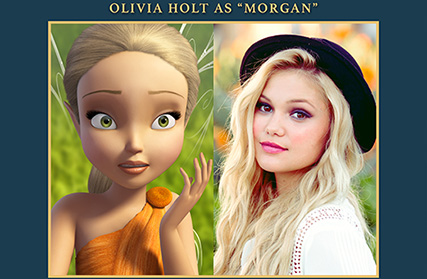 The Disney fairy movies are already jam-packed with a star-studded cast, but thanks to the addition of Olivia Holt, the gang can now count one more amongst their numbers. In the upcoming film Tinker Bell and the Legend of the Neverbeast, Olivia plays Morgan, an animal fairy with a rather stinky job. Despite her familiarity with grunts and growls, Morgan is stuck helping baby skunks learn to spray.

Olivia joins the ranks of Mae Whitman, Ginnifer Goodwin, Raven Symone and plenty of other famous fairies for her new role. In the movie, another animal fairy named Fawn tries to save a mysterious and possibly-dangerous creature called the Neverbeast despite her friends' and fellow fairies' concerns. The movie hits stores on DVD and Blu-Ray March 3rd.

What do you think about Olivia Holt as a fairy? What sort of fairy would you want to be? Tell us in the comments.