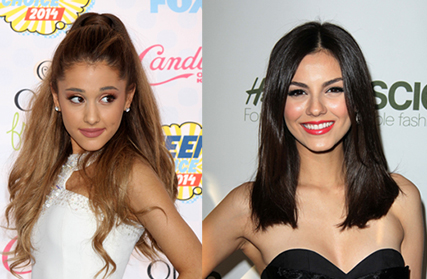 There've been rumors for years that Victoria Justice and Ariana Grande don't get along. The two have always denied it, but often people assume they're just being polite for the sake of good PR and that the whispers are true. The girls are getting tired of it lately, though, and Victoria Justice spoke up again in an attempt to finally put the rumors to rest.

"I would love to set the record straight because I feel like these rumors have been going on way too long," Victoria said. "So basically there was an article where [Ariana] had said she was bullied on set, and the magazine basically alluded to it being me. But before the article came out, she texted me privately and she was like, 'Oh my gosh, I'm so sorry, you know how the media twists words. I was not talking about you, obviously, I was talking about someone on Broadway that I had worked with.' But once it got out there, everyone thought that I was this bully and that I was mean to her which couldn't be further from the truth. Sure, we've had our differences but at the end of the day, everyone in the cast of Victorious was a family and I love and respect all of them and wish all of them well, no matter what." Victoria even added, "Hopefully now that she's talked about it, I've talked about it, there's no feud, we can put this behind us. We can practice what Frozen preaches, my friends, and let it go."

During the interview, Victoria also commented on the rumors about her role in Victorious's cancellation. "People were blaming me, saying that I was selfish for going on tour and I was the reason Victorious was cancelled, which first of all could not be further from the truth becaue I am not a Nickelodeon executive. I have absolutely no power over whether the show continued on. A lot of the other cast members didn't want to go on a Victorious tour anyway, so it was just kind of unfair."

What do you think about the Victoria–Ariana feud rumors? Do you think they're finally done? Let us know in the comments.