Exclusive: Ashley Argota talks The Fosters and her upcoming album 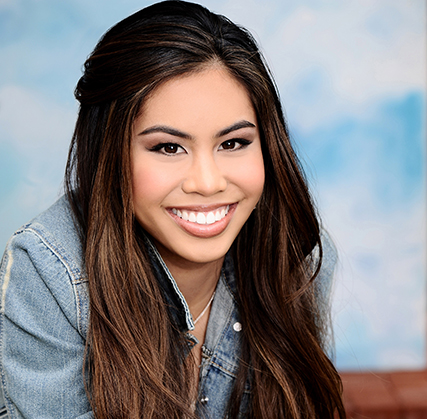 Ashley Argota has been killing it lately on The Fosters as Lou, the lead singer of Brandon's new band Someone's Little Sister. Now she's getting into the music game on her own time. Ashley's also working on her upcoming album and performing in a musical adaptation of Romeo and Juliet. Woah – talk about a packed schedule. In her few free minutes, Ashley chatted with us about her recent single, what she loves about Lou and the one character she's dying to play. Check it out.

Ashley: Lou is the very sassy lead singer of the band that Brandon joins. She’s really stubborn and kind of hard-headed. She has a mind of her own and she doesn’t really care about what people think of her. That’s what I love about her and I think that’s what I’ve learned from playing her the last year or so. She is not afraid to stand up for what she believes in and she’s not afraid to give her opinion.

GL: Are you two a lot alike?

Ashley: I feel for her passion for music. I’m very passionate about my music, so I definitely relate to that side of her, but she really doesn’t care about what people think about her and that part of her is kind of hard to relate to sometimes.

GL: Is it weird playing a character that's so different from you?

Ashley: It’s actually kind of fun because I get to step into the shoes of somebody completely different than me and be this totally different person for a little while. Then they call cut and I get to be Ashley all over again.

GL: What kind of character would you love to play?

Ashley: For the past couple of years I’ve played characters that are all over the place. I’ve played the mean cheerleader, a rock star girl, a bionics person – I think I’ve covered a lot of the bases here. But you know what I loved when I was little? They already made a movie of the first three books, but I loved A Series of Unfortunate Events. That was my favorite book series ever for the longest time. If they ever remade those movies, I think I’d love to be Violet.

GL: So tell us about your upcoming music!

Ashley: Yeah, I actually just released my single. Brad Hook, our music guy on The Fosters, helped produce it. I don’t know when my album’s coming out, but I’m so excited about "Limitless." Hopefully I’ll get to release another single or two soon.

GL: Is there any particular theme to the album?

Ashley: They’re all songs about experiences that have happened to me in work and in my personal life. I didn’t want to sing about anything I couldn’t relate to or anything I didn’t know. There’s a little piece of me in every song.

GL: You're also doing a musical adaptation of Romeo and Juliet called Love is a Battlefield in LA starting this weekend, right?

Ashley: Yeah! I play Juliet and I’m really excited. It’s the classic story set to Pat Benatar songs and it’s incredible because all of the songs we’re using in the show fit perfectly into the story. The guy who wrote it, produced it and directed it is Bradley Bredeweg, the co-creator of The Fosters. Brad Hook is the musical director for the show and Chris Downey is the choreographer like on The Fosters, so I’m working with a lot of Fosters family.

GL: How do you keep up with such a crazy schedule? Got any advice?

Ashley: Breathe! I find a lot of times I try to take on a million things at once and I have to remember to kind of just take it one minute at a time. If you need a break, don’t be afraid to give yourself an hour to veg out and do nothing.

What did you think of Ashley's new single "Limitless," available on iTunes now? Do you ship Brandon and Lou on The Fosters? Let us know in the comments below and don't forget to tune in on ABC Family tonight (2/9) at 8:00 p.m.