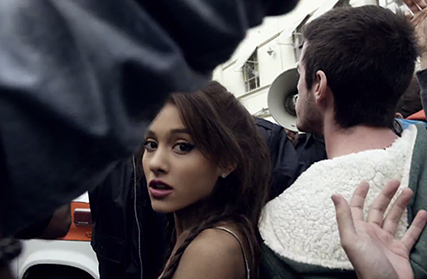 Ariana Grande's new single "One Last Time" is about giving up an old love, so it makes total sense that her music video would also feature a super dramatic goodbye.
In the vid, Ariana and her friend start out stuck in a car as the sky lights up around them with flashes and debris. According to the news reports in the beginning, the planet is facing a catastrophic event with a comet and, without knowing how much time is really left, Ari wants to make the most of it. Check it out.

The vid is super pretty to look at and we think the apocalyptic idea is so cool. We also love the cameo at the end revealing Ari's former Victorious costar Matt Bennett as the friend filming while they sneak through all the wreckage and rubble.

What do you think of Ariana's "One Last Time" video? Are you an Arianator?