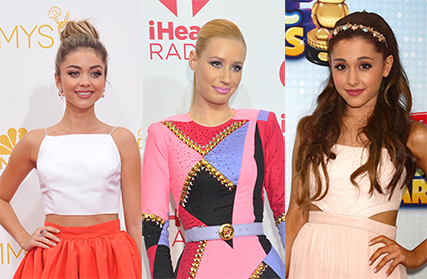 We’re going to get right to it and say that our fave celebs have been keeping busy these past few days. From premiering new music videos to making huge announcement, we have everything you need to know about what happened this week in La La Land.

Nick Jonas made a super fun video to announce that he is going to host this year's Kidss Choice Awards. In the video, just as Nick is about to get hit with a ton of slime, it stops and he tells the great news. His Jonas Brothers experience mixed with his solo-act and past Broadway history is the perfect combination to guarantee an incredible event. Also, after hearing the incredible list of nominees, we know there's no way we'll miss this show.

This week was a double whammy when it comes to music video premieres! Both R5 and Ariana Grande released new projects that we’ll be watching all week. Ariana’s video is for her song "One Last Time" and is set in a time where Earth is about to get hit by a comet. With tons of action and excitement, this is one of our fave Ari videos to date! The best part? The man behind the camera turns out to be played by Matt Bennett, who played Robbie on Victorious. We love how everything connects back together. R5 dropped their latest hit "Let’s Not Be Alone Tonight" along with a lyric video that shows them in the studio. We love that this vid gives us a look as to what it’s like to record a song and see the band totally in their element. This song will definitely be on repeat this whole weekend.

It’s no secret that Iggy Azalea has risen to stardom over the course of 2014. With tons of hit singles and even a Grammy nomination, it would be hard to find someone who didn’t know who she was. That being said, she has been under tons of unnecessary criticism lately and she took to Twitter to discuss her feelings about it. Iggy said, “I feel the hatred and pettiness I see online at all times is at making me become an angry person and I cannot be that.” Iggy also shared that due to the constant scrutiny, she will be taking a break from social media – her management will be running her accounts from now on. We think that Iggy is definitely taking the high road and applaud her efforts to not get involved.

The upcoming episode of the hit show Modern Family, "Connection Lost," was filmed in a completely different way. Instead of using cameras, the ep was shot using only iPhones and iPads. How crazy is that? When the executive producer considered that someone can find out so much about other people just by looking at their technology, it gave him the great idea. We can’t wait to see the final product when it airs Wednesday, February 25th.