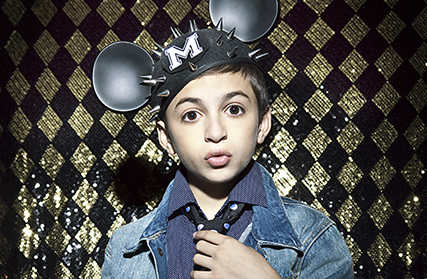 If you watched Glee's new episode "Child Star" last Friday, you were probably as blown away by J.J. Totah's character Myron Muskovitz as we were. After all, Myron, the demanding nephew of McKinley High's super intendent, was nothing if not scene-stealing. Despite playing a spoiled, bossy brat, though, behind the scenes J.J. is totally sweet but just as talented as his on-screen counterpart. We talked to the 13-year-old about what it was like going from stan to star and being the newest member of the Glee club.

GL: When did you start watching Glee?

J.J.: I started watching the show when I was eight years old and it was always a dream of mine that I would be on it and sing and dance on television. Now that I am on it, it’s totally amazing. It was so much fun, especially because I got to work with Broadway actors and actresses who are award-winning like Jane Lynch and Matthew Morrison.

GL: Your character Myron is a total boss – and pretty bossy. What was that like?

J.J.: Yeah, my character is not like anything anyone would want to be. He’s like every bad part of a person – I mean, he does have some good parts, but he is straight-off-the-bat over the top out there, controlling, psycho, wants everything to be perfect. He’s enormously talented, but he is one crazy little boy. He’s the superintendent’s nephew, so basically whatever he says goes. I feel so bad sometimes because he can be extremely obnoxious, so when I’m talking to a really nice person like Lea Michele who’s so sweet, I’m like, “Oh my god, I’m so sorry, I didn’t mean that actually.”

GL: Was it hard for you to play a character who can be so mean?

J.J.: This is going to sound bad, but it’s not hard to be super mean. It's actually really fun to play a mean boy.

GL: Is it true you're the youngest person to sing a solo on Glee?

J.J.: Yeah! I was told that while I was doing it, and I was like “That is so cool!” I got to record at Capital Records, which was especially awesome. You see all those big singers like Ariana Grande, Beyoncé, they’re all recording at Capital. It was really cool to be there every single day and just hang out.

GL: Got any good stories from on set?

J.J.: One day Samantha Marie Ware (who plays Jane on the show) and a Warbler and I took a golf cart from Paramount – and it wasn’t anything illegal, I don’t think – and just were driving around the whole lot. We thought it was all of our last days there and we were just like yeah, we’re gonna go off and do this, but then the next morning it turned out we were all back on set like, “Oh, whoops.”

GL: Was it cool to hang out with the stars when you were already a big fan?

J.J.: Pretty much my dreams came true when I did a duet with Lea Michele. Also, Jane Lynch is the nicest person I've ever worked with. I had the most dialogue with Becca Tobin and I really enjoyed working with her. Even when there aren't any lines, there are so many other scenes in an episode where you're in the background with everyone and you really build those relationships, so I also became pretty good friends with Samantha. Once we started bonding, people noticed and would put us together in the show, so it was cool to see that as well.

Did you love J.J.'s turn as bar mitzvah tyrant Myron? What else are you hoping to see during Glee's last season? Share in the comments below and don't forget to tune in to J.J.'s next ep this Friday (3/6) on Fox at 9:00 p.m.