Bella Thorne is making her TV return, but not for the show you think 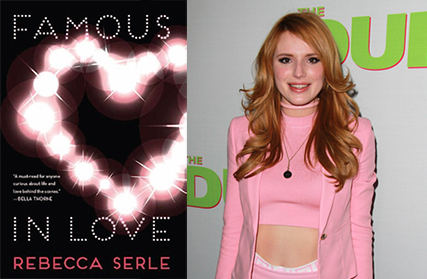 Ever since Shake It Up ended, we've been wondering if Bella Thorne would return to TV. Other than a few guest appearances, she's been sticking mainly to movies, but after she shared a SnapChat pic of her hanging out with Marlene King a few weeks ago, it seemed like it might finally be Bella's time to shine again on the small screen.

Though a lot of fans were wishing that snap meant Bella would be making an appearance in Pretty Little Liars, we were hopeful that the two were working on a totally new project. And while we were right about that, our guesses about what the project would be were totally wrong. Instead of working on a new show based on another Sara Sheppard series, Marlene King is actually adapting a different book – one which happens to be written by one of Bella's favorite authors.

The new project is called Famous In Love and is based on Rebecca Serle's book with the same name. The story focuses on Paige, a young college student who manages to land the lead role in a new movie based off a best-selling book series, as she adjust to her new life and grapples with her feelings for her costars both on-screen and off. With Bella starring as Paige, it seems like a major case of life-imitating art, and it's totally appropriate since a quote from Bella's review of the book graces it's front cover.

With Rebecca Serle and Marlene King working on the pilot for the new ABC Family show together, and Bella as the star, we know this is one show we're setting our DVRs for like now.

Are you excited about Bella's return to TV? Will you be tuning in to Famous In Love? Let us know what you think in the comments.