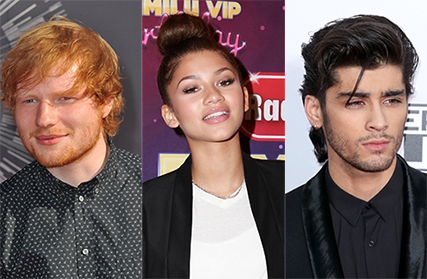 We’re pretty sure that it goes without saying that this week was full of heartbreak, anticipation and excitement for some of our fave celebs. From major, and we mean major, news about – that –boyband to having to say goodbye to a TV show, this week has been a rollercoaster!

After four seasons, Kickin’ It is saying good-bye. Olivia Holt, Jason Earles, Leo Howard and Dylan Riley Snyder all took to Twitter to live-tweet the series finale and say how thankful they are for the show and it had us pretty emotional. Although we are super sad to see the show end, we're also excited to see what these all-stars are going to do in the future. Check out this video from JJJ where the cast tried their best to sum up their experience with the show and express their gratitude. It's clear they all love each other and the show so much – and we love them, too.

After we all heard the news that must not be spoken of about One Direction, we’ve had a tough time thinking about how our fave five boys will now be a foursome. While we support Zayn's decision to do what's right for him and be true to himself, we're still totally heartbroken. According to reports, Zayn hadn’t been happy for a long time and was only staying for the fans, so in the long run we know that it's best he’s taking a break to have more time for himself and Perrie. Still, we can't help but mope a little. The good news, though, is that this isn't the last we've heard of Zayn. DJ Naughty Boy confirmed that he’s been working on other music projects, including a collab for the DJ's next album for some time now. We can't wait to hear it.

Is there anything that Zendaya can’t do? Honestly, we don't think there is, especially after the announcement earlier this week that Z will be the host of the Radio Disney Music Awards. Not only is she nominated for her amazing style and for her hit show K.C. Undercover, she'll also be taking the stage every few minutes to lead an amazing award show. Don’t forget to tune in to Disney Channel on Sunday, April 26th to catch all the fun and find out who wins.

It’s no secret that Ed Sheeran is one of the sweetest and most down to Earth celebs out there, but what he did this week has us in a pile of mush. After finding out a couple couldn't afford their wedding, Australian radio show Kyle & Jackie O surprised the two listeners with the bash of their dreams. To make the day even more special, the radio hosts interrupted the reception and said that they had one more trick up their sleeve, AKA a serenade by Ed Sheeran himself. The singer performed his hit "Thinking Out Loud" for the couple's first dance. We didn’t know it was possible to love Ed more than we already did.

After joining in the fun to celebrate Kenny Chesney’s 47th birthday at his concert in Nashville, it was Taylor’s turn to make the headlines. After being spotted hanging out and about with producer Calvin Harris, word of possible collab started to get around. Though neither star has confimed anything yet, we can't help but imagine the incredible tunes these two could make together. Calvin's known for working with some awesome artists, and we have a great feeling that any hit he and Tay worked on would be magic.