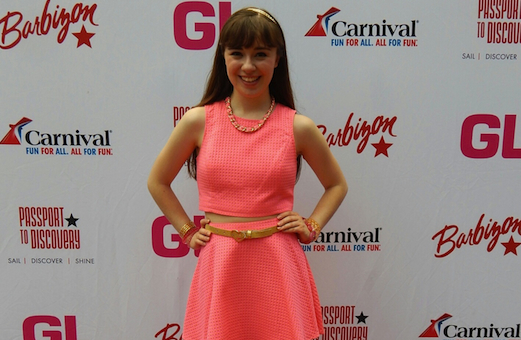 You know Kristina Lachaga as "The Girl With The Big Pink Heart" (and, of course, from the GL stage at our 2015 Fashion Bash event). Read her very special guest post about her day as a GL superstar rocking the mic and cheering in the stands.
Hey #GLGirls…and #Directioners…and, of course, #Heartbreakers!

Just FYI, August 8th was a TOTAL DREAM DAY and total #goals. Between performing at #GLFashBash aka the ONE-DIRECTION PRE-PARTY (say what?!), meeting so many amazing & stellar #Heartbreakers all day long in Baltimore (way too much fun!) and then going to the One Direction concert at M&T Bank Stadium that night (swoon!), I had the best day ever! 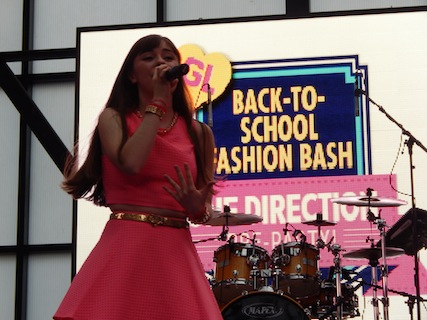 #GLFashBash was everything you could wish for and more! Fans from far and wide packed Power Plant Live! and turned the plaza into a literal runway and fashion-maven haven with so many epic fashion moments that could be spotted everywhere you turned! Plus, Brec Bassinger, Haley Tju and Lilimar Hernandez from Nickelodeon’s Bella & The Bulldogs co-hosted the day! They were literally the sweetest (umm...can we be besties?), so fashion-forward and the perf trio to talk about the top Fall trends that were rocking their way down the runway. (Dear GL, can I borrow your wardrobe & steal your style?! I had so many fashion show faves! Your looks are SO on point!)

I wanted to make sure that even if you had to R.S.V.P. "no" to the party of the summer (sad face!), you wouldn’t miss the BIGGEST and BEST moments! You heard me right! I’m giving YOU the behind-the-scenes scoop and a first-hand look at some of my fave, mega moments from the big day in my YouTube video “From Fash to Bash: A Day of ‘Style’” later in my article! So…grab some popcorn and all your besties (and 1D lovers!), read on and then experience the day for yourself when you click play!

I couldn’t wait to hit the stage for my performance because...it was the DEBUT of my soon-to-be-released single "R.S.V.P." which was inspired by one of Simon & Schuster/Aladdin MIX's newest releases, You're Invited (the book was co-authored the wonderful writing duo Jen Malone and Gail Nall – love them!). If you had the chance to hang with us at the Pre-Party in Baltimore, you were the 1st people to hear my new single...like EVER. Eep! Waiting to perform or release a new song is like having this little secret that you just HAVE to share with the world and as we all know: "Secrets, secrets are no fun unless you share with everyone." So THE SECRET IS (KINDA) OUT, although the song won't hit iTunes until this Fall ;D

(I didn't wanna leave you in total suspense of what the song sounds like so...here's a 10 second sneak peek of "R.S.V.P."! TIME TO TURN IT UP LOUD & JAM OUT ON REPEAT WITH YOUR BESTIES!)

After my performance, I loved posing pretty in front of the Bratz photo wall & taking super cute selfies there! OH and Taylor Swift was there. YEAH. T-SWIFT. I even snapped a photo with her...and by 'her' I mean her wax figure from Madame Tussauds D.C. - so happy she was able to make the trip to Baltimore. Can't wait to catch up with ya again next time, Tay ;D

And speaking of meeting people…The GL Meet & Greet zone was so much funnn and I loved meeting every single one of my #Heartbreakers in Baltimore! Y’all are too cool with your funny jokes, fashionable style, & adorbs selfies. ONE #HEARTBREAKER BROUGHT A SELFIE STICK. Life = made! AND I EVEN MET A HARRY STYLES LOOK ALIKE. I'll take it. What more could a girl ask for?

MAYBE TO GO THE ONE DIRECTION CONCERT, TOO. BUT IDK. CAUSE THAT WOULD BE AMAZING, TOO (#OTRABaltimore I love you).

“LET’S GO TO THE ONE DIRECTION CONCERT CAUSE #DoubleOMGYes” 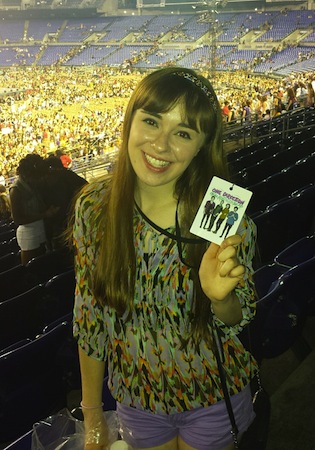 I hadn't been to a One Direction concert since their British/Irish, very Beatle-like Invasion back in 2012. Back when Styles still sported the blazer, Niall didn't yet rock the guitar on-stage, Louis liked girls who liked carrots and wearing shirts with stripes and shoes with no socks, Liam had just let us in on his spoon-phobia and Zayn was still, well...there.

So right after #GLFashBash, we loaded out of Power Plant Live!, did a quick change from pretty in pink performance attire to a plethora of paisley and purple and headed over to M&T Bank Stadium for...drum roll please...Honda Civic Tour Presents One Direction: On The Road Again. YAY YAY YAY (times infinity).

By the time we found parking, we had missed seeing Icona Pop (not an "I Don't Care" moment because I really did care). But luckily we could hear them outside the stadium – YES! “I love it!”

ONCE WE FINALLY MADE OUR WAY OVER TO THE VENUE, BOUGHT MERCH & FOOD, WALKED AROUND A BIT AND THE LIKE, WE FOUND OUR SEATS. And sat. And waited on the edge of our seats in an energetically-patient way. And did the wave and screamed and listened to music blasting through the speakers and saw familiar, beloved faces on the bigscreen and kept thinking the concert might just start any second now until...LIGHTS OUT.

The crowd? Massive. Over-40,000-people-up-on-their-feet-while-screaming-and-singing-every-word kind of massive. The energy? Out of this world high. And One Direction? Did you even have to ask?! They were "Better Than Words" and it was a concert for the record books. Streamers flew through the air. Fireworks lit up the night sky. Purple could be spotted pretty much everywhere (a special ode to the Baltimore Ravens). "Drag Me Down" was the ultimate showstopper. And let's face it: I had no control during "No Control" and I will never get over "What Makes You Beautiful" (guess it's my #MusicCrush). Who knew that 3.5 years ago when I first heard their voices on my friend's iPhone during our Fashion Merchandising class that those boys would turn out to be the world's biggest boyband and basically change pop culture (and the twitter feeds of girls around the world) forever?!

#OTRABaltimore was a night to remember and left me wanting more (and just for the record I got my wish: we went to their concert in Philly! #DoubleOMGYes, and BTW can that hashtag be my thing?! Let's get that going!).

After the concert was over and I realized that the “I LOVE YOU NIALL” screams of the girl next to me hadn’t in fact been that deafening, we had to wait in the parking lot for 1.5 hours to leave. But it actually wasn’t the end of the world either because we got to watch the crew load out from the back of the stadium – very cool behind-the-scenes moment to watch! I’d say pretty successful day for sure.

Niall Horan, Louis Tomlinson, Liam Payne and Harry Styles brought down the house…I would even say they raised the roof, if the stadium had a roof! There were so many memorable moments and a lot of adorb banter between the boys. I couldn’t just leave you hanging without the details to imagine in your noggin, so read on so you don’t miss one thing:

Some food for thought from #OTRABaltimore (and speaking of food I bought cotton candy during Drag Me Down...my timing = pretty bad)…

- The Obv: The boys cranked up their obviously undeniable charm for Charm City and there’s ‘No Doubt’ they stole Baltimore's heart (cause when are they not charming?)

- We screamed and squeeled for everything and anything: wardrobe carts being pushed up the ramp to the backstage area, people walking from backstage to the audience, a couple of false alarms to the actual start of the concert...but HEY HEY HEY! Concert Insider's Tip from Me to You: Watch the tv screens on the concourse so you don't miss a single moment. You’ll be the go-to girl when everyone's wondering what cued the stadium to erupt in screams.

- Directioners heart the 5SOS Fam. Like when the "Good Girls" music video had its moment on the big screen before the concert started, all lips were moving as far as the eye could see.

- POOR LIAM WAS SICK. Super sad face. He announced it towards the beginning of their set and had us sing for him a couple times (as though he had to tell us twice!)

- There were some epic, on-stage moments that didn't involve singing at all and they can be summed up in three words: water fights, lemon and tupperware. (Harry was responsible for a majority of the hilarity that ensued).

- The Projects: For each city of the One The Road Again Tour, Directioners created projects to make their city stand out and super memorable for the boys. Baltimore did not disappoint with (at least) 3 different projects, like Burning Up Baltimore (the stadium was lit up with purple glowsticks - how stellar & magical?), Purple Out (lots and lots of purple, everywhere. I wore purple, too!) and the Bandana Project (fans wore different color bandanas to signify who their fave member is –oh boy, so hard to choose!).

- And a universal fact felt by everyone at M&T Bank Stadium...We didn't want the night to end. Like seriously! Couldn't the boys have stayed *literally* "Up All Night" with us in Baltimore?! And now all the North American tour dates are over. UGH. Why can't there ‘Bmore?’ We want more, we want more (now that's a stadium chant for ya if I do say so myself).

Remember that popcorn? Is it ready yet?! Cause it’s time to click play right here for my YouTube video “From Fash to Bash: A Day of ‘Style’” ;D

Bottom line: #GLFashBash & #OTRABaltimore were "Once In A Lifetime" experiences & I can def mark down August 8th on my calendar as totally magical, unforgettable, & jam-packed with AMAZING-NESS. (Say it with me: "Ah-mazing-ness"). And trust me, I know that once Charm City steals your heart, there is no going back. My heart goes in "One Direction," always leading me back Baltimore (aka my first hometown!).

Can't wait to see what Girls' Life has in store for next year's Fash Bash...guess we'll just have to wait and see! Until next time, #Heartbreakers!

love, the girl with the big pink heart <3

Have you ever been to a One Direction concert? What were YOUR most memorable moments? I wanna know, so drop me a note in the comments like right NOW, #GLGirls, #Directioners, & #Heartbreakers!