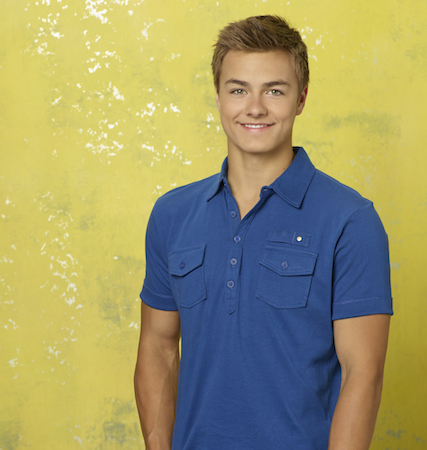 You know and love 16-year-old Peyton Meyer as Lucas Friar in Disney Channel's Girl Meets World, but this week prepare to see him in a whole new light when Lucas and the rest of the GMW crew go on a very special trip. That's right, it's finally time for the three-part episode that the internet has been buzzing about for weeks: "Girl Meets Texas."

When Riley (Rowan Blanchard), Maya (Sabrina Carpenter), Farkle (Corey Fogelmanis) and the rest of the group head back to Lucas and Zay's (Amir Mitchell-Townes) home state of Texas, thing are bound to get a bit wild—and larger than life. After all, you know what they say: everything's bigger in Texas. We talked to Peyton Meyer about these three awesome eps (airing Friday, Saturay and Sunday) and got the full scoop. Check it out.

GL: So what makes these episodes so awesome?

Peyton: I think just being in Texas is awesome—especially for Lucas because that's where he's from. We've haven't gotten a chance to meet Lucas's family or see where he's from before, so that's exciting, too. Seeing Zay and him get to show everyone where they grew up is cool. Plus, we actually got to film on location! We were busy filming most of the time, but being there and wearing these Texas outfits with horses walking around and bulls ina cage was just so different from our usual set in the soundstage.

GL: Rumor has it that there's something brewing between Lucas and Maya in these eps. Anything you can share?

Peyton: Their relationship has definitely been building, but you never know which way it's going to go. At first it was Lucas and Riley and Maya just had this attitude with him, but now it's more of a relationship than just teasing. It's sort of like a little triangle. It's fun that the fans are into it, but if you want to find out what happens you'll have to watch the episodes. 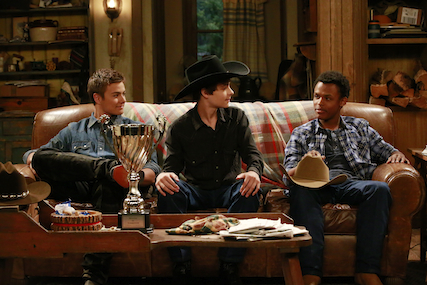 GL: Fair enough. You guys also got to work with Maddie & Tae for a performance, right?

Peyton: Yeah! They were performing on this little stage the crew built in a restaurant set. They played a couple of times, which was great because I'm a pretty big country fan. I love "Girl In A Country Song," it's so catchy.

GL: So do we! And you guys got to do some country line-dancing, too.

Peyton: Yeah, but I'm the opposite of a good dancer, so any time we have any sort of dance scene I stress out. We only had one day to learn it—and then they changed it up a little once we got to set—but it wasn't too hard. Rowan was actually pretty good, which was super impressive because she was doing it in these big fancy boots.

Peyton: It was pretty terrifying. It was a lot of TV magic, but the bull on set was real and huge and intense. It kept making all these weird nosies and getting angry. I've ridden a mechanical bull before, but I think that's as far as I'll go when it comes to bull riding. 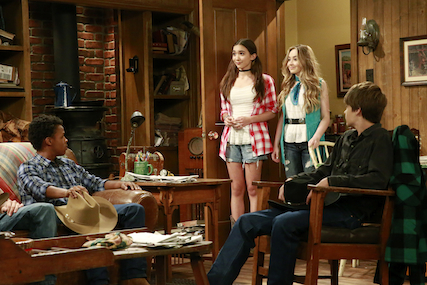 GL: Were you any good at it?

Peyton: I held on for a little while until I realized I was cheating and you're only supposed to use one hand. And then I got thrown off right away.

GL: In the third episode they get back to NY and there's some pretty big drama to deal with, right?

GL: Especially between Riley and Maya when it comes to Lucas.

Peyton: They're all kind of confused about where they are in their relationships. It's a lot of teen angst just figuring everything out. But they're Riley and Maya. They have the best friendship ever, so you know they'll overcome it. They're just the coolest.

Are you ready for "Girl Meets Texas" Parts 1, 2, and 3? Tune in to Disney Channel tonight, tomorrow and Sunday at 8:30 p.m. to find out what goes down, because what happens in Texas definitely doesn't stay in Texas.