Thought Nikki and Nina hated each other? Think again 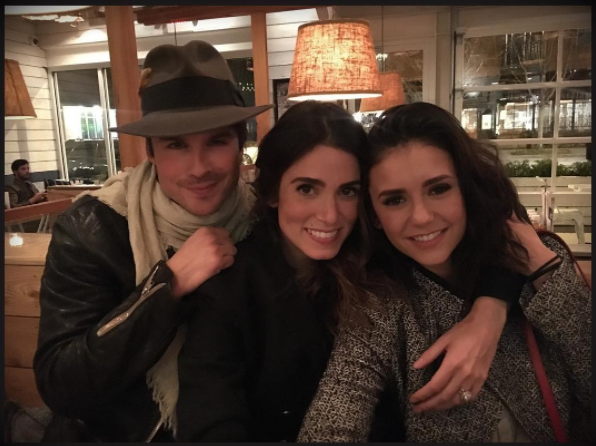 On Tuesday, Nikki posted a picture of the trio on her Instagram with a long caption regarding the need for girls to stop believing headlines that teach women to hate other women. But where is this stemming from?

In May of 2013, The Vampire Diaries co-stars Nina and Ian ended a 3-year-long relationship, which had “Nian” shippers up in arms. Once Nian was no more, girls were outraged. It wasn’t long after Nina and Ian broke up that Ian began dating the Twilight star, and in 2015 the two married. Fans began writing mean, hurtful comments on Nina’s, Ian’s and Nikki’s Instagram accounts, urging Ian to get back with Nina.

Websites and blogs, according to Nikki, didn’t help by posting articles insisting there was a feud between her and Nina. Fans read these headlines and started commenting even worse things on the actors’ feeds.

Now, almost two years after Ian and Nikki's wedding, they joined Nina to send a message to girls everywhere. In her post, Nikki wrote that the trio felt it was best to initially respond with silence. Now she realizes that people took it as a way to make up false stories.

She then went on to clear up any rumors that were circling the Internet regarding bad blood between her and Nina. Nikki reminded us “how important it is to stop this trend of writing horrible headlines about women, painting us as bitter, angry, insecure, heartbroken, childless, feuding, backstabbing monsters because whether we want to admit it or not, it changes the way all women view themselves.”

Feeding into lies and stereotypes can only cause harm. With all of the negativity in the world, it’s crucial to remember that our fellow women are our best allies. So instead of tearing other girls down and bullying them, we need to build each other up.

Nikki urged girls to put out positivity so that, eventually, we all see a difference in the way we treat each other and feel about each other. Her entire post can be found here.

How do you think we can change rivalry between girls? Sound off below.