EXCLUSIVE! Charli and Dixie spill on TikTok, sisterhood and *how* they got so famous 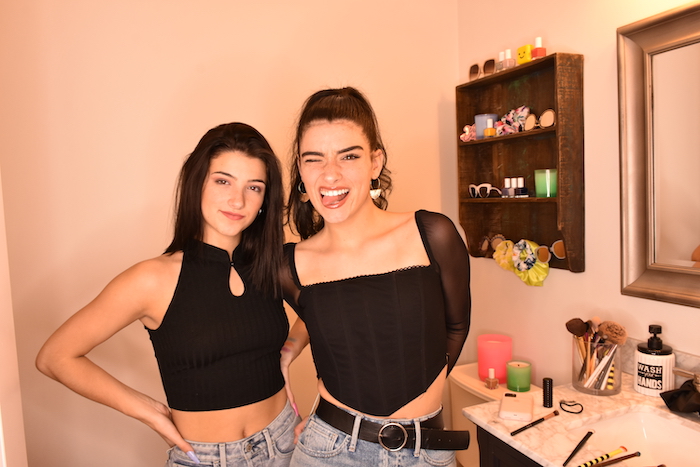 Here we are, spring 2020, and TikTok's most famous sisters, Charli and Dixie D'Amelio, are on an hour-long conference call, trying their best to explain a life even they don't quite understand.

As the tale goes, it was only last summer when the social media gods blessed a 15-year-old girl from Connecticut named Charli after she posted a random dance on TikTok. While Charli had been training in dance since she was 3, she had no intention of becoming famous, much less by going viral on an app she was the last of her friends to join anyway. A year ago, the most exciting part of Charli's life were her daily Dunkin' cold brews and the 30 hours a week she spent at her local dance studio—her "happy place," where she still takes classes whenever she's home.

These days Charli jetsets to L.A. to hang out at the "Hype House," the topsy-turvy mansion and enclave for young, famous TikTokers, over whom Charli reigns supreme.

But her best friend is still a girl named Gemma whom she met in dance class back home, back when winning an award at a regional competition probably would've made her just as happy as 2 billion views.

And now, that's exactly what Charli's got, thanks to over 75 million TikTok followers, who tune in to her inexplicably addictive daily posts, featuring trendy dance challenges like "I'm a Savage" and "Renegade" (a routine she popularized but admittedly didn't invent).

She attended Milan fashion week with Prada, appeared in a Super Bowl ad, guested on Jimmy Fallon, danced on stage with Bebe Rexha and the Jonas Brothers, signed with a major talent agency, and is possibly/probably getting a reality show.

Read: Your *fave* TikTok stars are getting a reality show

Online tea accounts obsess over every detail of her life, from who she's dated to her skincare routine to whether or not she's a better dancer than any of the other Hype House girls.

Once headlines turn from the story of how someone got famous to wanting to know their favorite dessert, favorite show and favorite song (for Charli that's ice cream cake, a tie between Grey's Anatomy and The Office and "Love Me More" by Trippie Redd) you know they've officially become a celebrity. That's the threshold that Charli seems to be rapidly crossing.

"It's brought us a lot closer," Charli says of fame's effect on their sisterly bond. "We were already very close but since this all started, we've realized that no matter what happens, we have each others backs-and no one can get in the way of that."

As with most sudden social media stars, you either *get* Charli and Dixie...or you don't. The fans see themselves in Charli's uncovered freckles and Dixie's shyness and they want to be their best friends. Charli doesn't look like a "celebrity," she looks like a girl you went to camp with.

She's short, has never dyed her hair and doesn't really wear makeup—not even in her TikToks, which now get millions of views each. "People are so mean on the internet, which sucks, but then again, I post on TikTok like 3 seconds after I wake up when I'm not ready at all, and I'm not gonna change that," Charli confesses.

Charli's dance moves are easy to follow. Less Maddie Ziegler's "Chandelier" and more Alex Russo's "Crazy Funky Junky Hat." They're the sort of routines you might make up with your friends at a sleepover and film half-trying at 2 a.m.

believe it or not but i passed out trying to learn this @charlidamelio DC:@keke.janajah

The day of our interview, Charli isn't wearing head-to-toe Gucci a la Billie Eilish or Emma Chamberlain but instead a $30 gray Nasty Gal Hoodie. She's in a good mood because she just learned how to make her own cold brew at home.

Dixie, whose own following is now 30 million strong, is the quiet one. Wearing an oversized Mad Happy sweatshirt, she's proud of herself for putting on jeans this morning even though she isn't going anywhere.

Private, cautious, and admittedly "not a dancer," in many of her TikToks, Dixie attempts a routine then gets self-conscious and giggles her way to the end. After graduating from high school this year, she's starting college at the University of Alabama, where she'll be majoring in business. Her ultimate goal is to move to New York City—her favorite place in the world—and run her own company.

Of course, for every stan that appreciates the D'Amelio sisters' everygirl appeal, there's a hater that argues other performers deserve the fame more.

What really gets to Charli? When anonymous commenters say she deserves their criticism, because she "signed up for it" by posting on TikTok at all. "It's like, 'Oh, that's not really how life works, but OK," she claps back gently.

Here's some truth for those trolls: Less than a year ago, Charli and Dixie weren't household names. Or even trying to be. They were you. Or me. They were minding their business, then boom: (social media) world domination.

But even with all of their fame, it's impossible to get a true sense of the D'Amelio sisters as three-dimensional people from their TikToks.

Read: Get ready: Charli and Dixie are teaming up with Morphe

Because no matter how many 15-second videos you binge, you'd never know that Dixie can recite the Gettysberg Address by heart. Or that Charli's been studying French for five years and hopes to become fluent.

You couldn't guess that Dixie's favorite comfort food is her mom's Cajun rice. Or that Charli's an extremely picky eater but loves pickles. 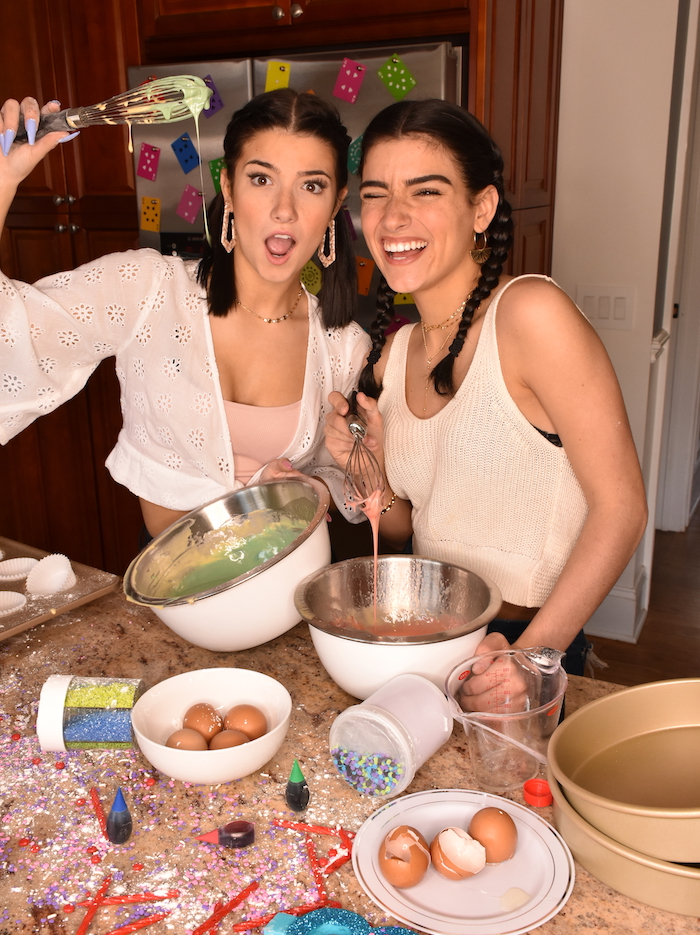 You wouldn't know that Dixie watches Shark Tank and had a mohawk back in middle school. And only those who know her best could tell you that if Charli were to move anywhere in the world, it'd be the Bahamas. And that when she was ten, she had a crush of tWitch and dreamt of marrying someone like him so they could have amazing hip-hop dancer babies one day.

It also might not feel on-brand to share that just a few years ago, Dixie and Charli weren't exactly "cool."

At 13, Dixie was an introvert with major anxiety, mostly about school. She felt like she learned differently from most of her peers and would stress over tests and projects to the point that she wouldn't sleep.

Read: Catching you up on *all* the Dixie and Griffin drama

Around the same time, Charli was dealing with issues of her own. Charli actually got bullied long before TikTok existed. The year before middle school, her classmates' parents decided that they didn't like that she was "different" (they disapproved of the crazy patterned clothes she liked to wear and the fact that she wanted to be a back-up dancer for J.Lo when she grew up) and told their kids to stop talking to her.

As a result, Charli barely had any friends. She even lost some of her passion for dance—that is, until she found her new studio and met Gemma. "But look at those people who told me I wasn't right for doing what I was doing. And then look at where I am now," Charli says, a confident bite interupting her usual soft-spokenness. "I've grown from that. It made me realize not everyone is going to like me. I just have to find good people and move on."

With self-awareness in no short supply, Charli changed her TikTok bio months ago to read "don't worry I don't get the hype either." Leave it then to her sister Dixie, her built-in hype woman, to explain the "It factor" Charli can't see: "She's just herself when she posts. She's natural. She doesn't try too hard to look perfect or be someone else."

Most of the #relatable icons the internet gives us eventually wind up dripping in Louis Vuitton, skipping college to move to L.A. and adjusting their dreams according to their new clout.

But in the coming years, all Charli wants is to keep dancing—the thing that's always helped her through tough times. She hopes to use her platform to make the dance world a more positive and inclusive place for those who might not have the "perfect" ballerina body and give opportunities to dancers with tons of talent but none of the advantages that Charli has had.

With no actual plans to move to the Bahamas (or even vacation there), Charli and Dixie describe their perfect summer day like this: a sisters' road trip to Jones Beach on Long Island about 90 minutes from home.

thankful for my forever best friend 🖤

"We love long car rides," says Charli. On the drive they'd blast a playlist of country songs like"Wide Open Spaces" and "Chicken Fried," two iced coffees (from Dunkin' obvi) in their cup holders: a large cold brew with caramel and whole milk for C, a medium iced coffee with caramel, milk and sugar for D. Once at the beach they'd swim a little, lie out a little and split an order of Chick-fil-A nuggets and fries.

Maybe they'd make a few TikToks, but maybe not. After all, the fame is cool and everything, but it might not last forever.

And, really, Charli and Dixie are just fine with that.

Hey, girl! Just wanted to let you know that this story originally ran in our June/July 2020 issue. Want more? Read the print mag for free *today* when you click HERE.