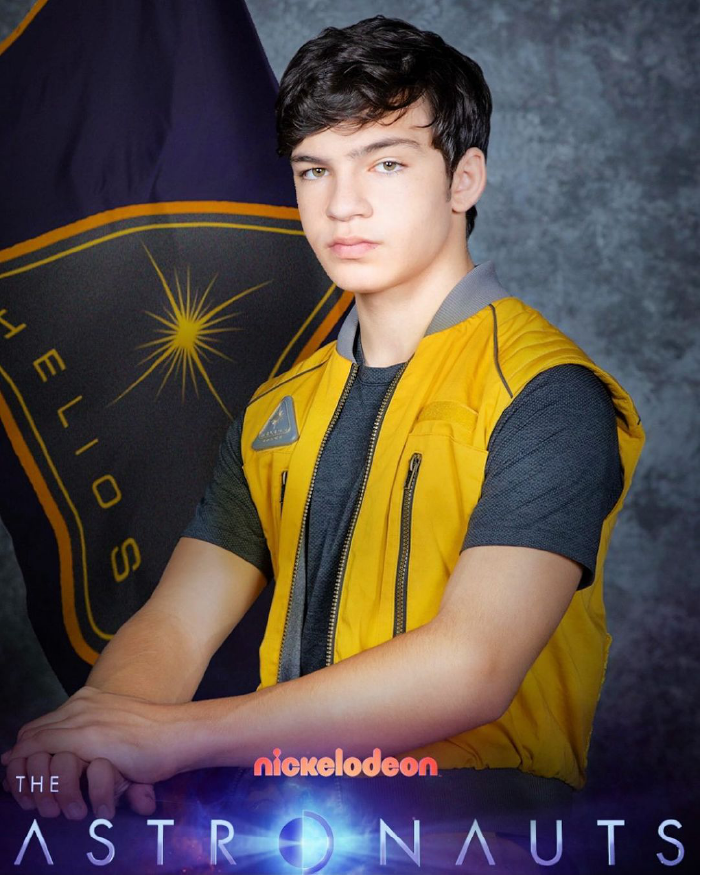 We caught up with Bryce Gheisar, one of the stars of Nickelodeon's new hit series The Astronauts, to talk about his egotistical character, Elliott, pranking the rest of The Astronauts cast, and how his years as a competitive gymnast prepared him for pretending to live in zero gravity.

Girl's Life: Tell us about The Astronauts and your character, Elliott.

Bryce: The show is about five kids who decided to sneak onto a spaceship and the kid that convinces him to do it is Elliott, which is the character that I play. He's the son of the spaceship’s billionaire owner, and he's kind of in the shadow of him his whole life. So, he wants to do something to prove himself and do his own thing. So he decides to sneak onto the ship. He comes off as a very arrogant character, but he actually has a very sensitive side that he shows throughout the season.

Bryce: I don't think that I have too much in common with my character. Usually, whenever I audition for a role, it's a lot easier for me to be really different than my character, because if it was like me in any way, I would always try to change it.

GL: What was the thing about Elliott that was most different from you in real life? And where did you draw your inspiration to, to play him?

Bryce: One of the biggest differences is probably, that we'd have—obviously other the whole billionaire thing, that would be an amazing thing to have in common with Elliott—but I think that I have a really tight knit group of friends and I can be myself around my friends. I think that's a big difference between my character and me. Elliott kind of struggles with being himself around people.

GL: What has been your favorite thing so far about filming The Astronauts?

Bryce: It's been great to work with the cast. We work, we hang out on and off set, and it's really fun. It feels more like school and more like a hangout session than it does like going to work. So that's really fun.

GL: Have you pulled any pranks on your astronauts castmates?

Bryce: I actually haven't been able to. I would like to call myself the prank king, but I have not been able to because of the COVID precautions, but my dream prank to do on The Astronauts would probably do something with the wire work we do. I'd probably come up with something to do with our stunt coordinator and try to find a way of making it seem like there's a malfunction with the antigravity wires.

GL: That's definitely planning big. Out of all of your castmates, who do you think would have the biggest reaction to that prank?

Bryce: I think Miya [Cech]. I've scared her on multiple occasions by just jumping out at her and she always has a pretty big reaction. So I think if I did something big like that, she would be pretty freaked out.

GL: Do you have any fun stories from set that you could share with us?

Bryce: Actually, I think anything with the wirework is really cool because it gets edited out in post. So that's always really fun. It's alway really cool having to act like I'm in zero gravity. But then right when they call cut, my hands just hit the ground. It feels like you're actually in space whenever you're acting that out. I hold my arms up and act weightless.

GL: You have a backgroud in gymnastics. Has that helped you at all with the wire work that you have to do on the show?

Bryce: Yeah, for sure. I’ve always thought that being a gymnast when I was younger has helped me in different ways—especially on the show when I’ve had to do all the antigravity stuff, like going up on wires and doing the parallelogram, which is like this thing that makes you look weightless. It’s been a lot easier because I was in gymnastics.

GL: That's very cool! Do you feel like gymnastics taught you any lessons or anything you've been able to apply to acting or life in general?

Bryce: Definitely! I had a sense of responsibility, because I had to go there for three hours every single day after school. So I had to worry about my homework and time management, which has really helped me recently. And discipline, definitely. Whenever I was in gymnastics, we really saw it as a future for me. So that also really helped with acting. I just had a lot of lessons that I learned in gymnastics kind of transferred over to acting.

GL: How long were you a gymnast?

Bryce: I was a gymnast for around six years, around ages three to nine.

GL: That's intense! And what made you decide to shift away from gymnastics and focus your attention on acting.

Bryce: Well, gymnastics was the only thing that I remember doing at that time, so I wanted to do something different. I felt like if I spent my whole life doing that one thing, then I didn't really have an understanding of if I might like something else more. So my friend told me about this acting school that I could go to, and right when I tried that out, I was hooked.

GL: How did your parents feel about that? Was leaving gymnastics a big conversation for you and your parents? Were they very involved in that decision, or did they leave it totally up to you?

Bryce: Oh definitely, we had a lot of conversations. It took weeks to really come up with an answer, but I didn't really know what I wanted to do. I was worried because I didn’t know if it would work out being an actor, so I had to find the pros and cons to each side of the decision. After I started acting, I felt like that was the thing that I really wanted to do for the rest of my life.

GL: When you have a big decision like that to make, do you tend to be super logical with pro/con lists, or do you more just follow your gut and your heart?

Bryce: While I'm talking about it, I kind of have to think about the pros and cons. That’s how I always start off coming up with an answer, but at the end, I always follow my heart and whatever feels right.

GL: With gymnastics, it sounds like you were kind of at that point where it was going to become almost like a full time job and then you shifted over to acting, which is, technically, a job, but it felt less like one because it was fresh and new and you were having fun doing it. Do you still feel that way about acting now? Does it ever feel like work or does it still always feel fun?

Bryce: I wondered at first if I was going to feel the same way about acting. That's what kind of scared me. I didn't want to be the person to just give up on something because I was bored of it. I wanted to make sure it was the right decision. But I still have a lot of fun acting, and it really excites me. Every single day I go on set not knowing what's gonna happen. So it's always something new. I really like that it’s very different every day. You can't really get bored of acting.

GL: What’s your favorite Halloween costume you’ve ever dressed as?

Bryce: There was one year Halloween where I dressed up as a trash bag. Literally, all I did was put my feet and arms through a trash bag, and then put some trash around my neck. And then I was a trash bag. I showed up to a party not knowing that I was supposed to be wearing a costume, so it was very last minute.

Tune in for The Astronauts, premiering on Nickelodeon on November 13 at 7 pm. ET.

Image credit: Nickelodeon via @brycegheisar. Edited for digital coverage by Serena Sherwood. Parts of this interview were edited and condensed for clarity.