EXCLUSIVE! We interviewed the cast of The Baby-Sitter's Club about literally everything

The cast of The Baby-Sitters Club invited us to an *official* club meeting where they dished on fame, fashion, babysitting horror stories and their ginormous future dreams.

HERE WE ARE: The cast of the instantly iconic Baby-Sitters reboot—Shay Rudolph (Stacey), Momona Tamada (Claudia), Malia Baker (Mary Anne), Xochitl Gomez (Dawn)—and me, totally fifth-wheeling as the TV stars and real-life besties host a (socially distanced) BSC reunion. (Due to COVID-19, Florida based cast member Sophie Grace, who plays Kristy, was unable to join us.)

ICYMI: Netflix's updated take on Ann M. Martin's beloved books from the '80s and '90s follows a group of five middle school friends and their grassroots babysitting business. As soon as the series dropped in July, viewers flipped for the lovable, stylish cast, who perfectly portrayed the feel-good, binge-worthy friendship story we didn't know we needed.

Even in these casual times, the girls look TV-ready: Momona (aka "Momo") is wearing a Claudia-esque neon yellow top and oversize denim jacket, while Shay dons a chic magenta cardigan with rainbow earrings. Malia is rocking an elegant '70s-ish button-down and a high bun while Xochitl ("Xochi" to the crew) is cozy in a striped tee, ponytail and plaid pants. The second everyone sees each other, they start chatting just like their characters at an *actual* Baby-Sitters Club meeting. 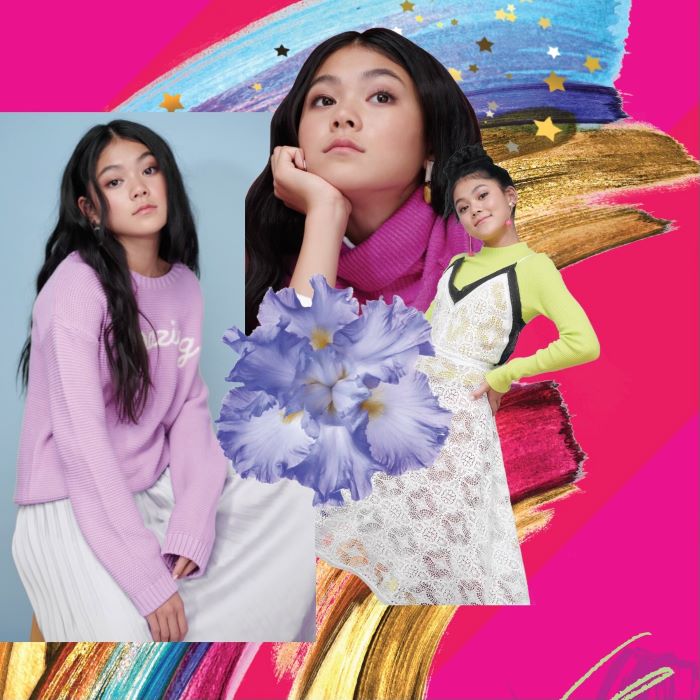 The girls say they feel like this entire year—from shooting the series to FaceTiming each other the night it premiered, counting down until the 12 a.m. Netflix release—has felt like a dream. None of them had ever worked on a project with a cast this big before. Having besties to geek out over fan edits and DMs with (as well as commiserate over the anxieties of new fame) had made the "surreal" experience way less lonely.

As Shay says, "We're definitely navigating how to go through this. And we have each other's backs, because blowing up on social media overnight is really weird and kind of scary." Adds Malia: "Oh yeah, we talk constantly. Every day, at least."

The 13- and 14-year-old actresses could've never predicted the first day they stepped on set that their fellow castmates would quickly become, as Malia puts it, "chosen sisters."

At first, they were sort of (OK, very) intimidated to meet. "I remember when we all saw each other for the first time. Everyone had prepared me to be in competition mode—like 'everyone's going to be really mean and feisty,'" Malia reveals. "But I saw Shay first, and you just hugged me. And I was like, OK phew. Everyone was *so* nice. From day one, we were always sitting on the floor together like real best friends." The girls agree: Their connection was "instant."

The fact that Malia, Momo, Xochi and Shay are so much like their characters definitely helped break the ice. "I mean, the first day I met Xochi, I heard jingling in her pockets, and it was crystals! She came up to me and started massaging my temples. I didn't even know her," Malia recounts, as her castmates crack up. "I'm definitely a full-on Dawn," confirms Xochi with a knowing grin. 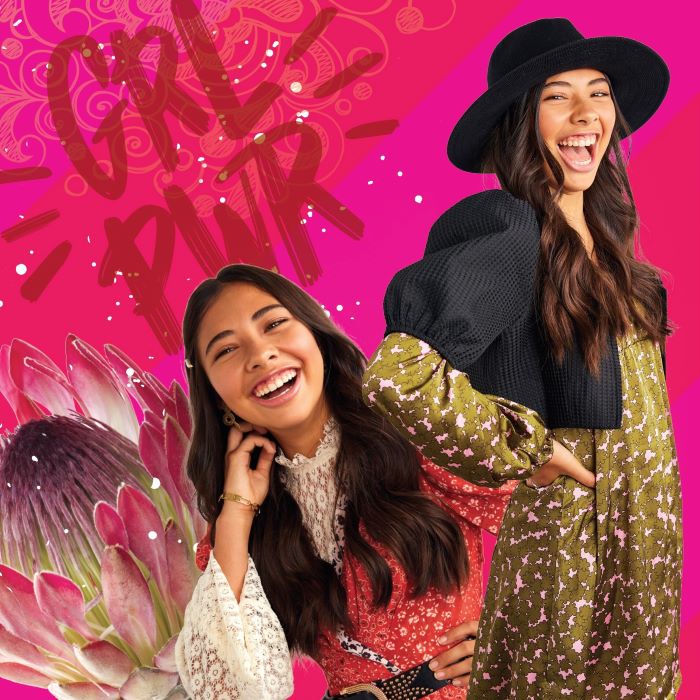 The girls say it's been super fun to see which characters their fans connect with the most. "The cool thing about The Baby-Sitters Club is that everyone can identify with at least one of the characters," shares Malia, who actually sees herself as a mix of Dawn and Claudia, with "a little bit of Kristy, just because I'm assertive."

Shay identifies as a Stacey mixed with Dawn and Claudia. And Momo says that, while she used to be a Mary Anne, she's more of a Claudia-Stacey hybrid now that she's older and more outgoing. "It's funny to see which characters you start to resemble more as you grow up," Momo tells the group.

One thing that played a major role in making the BSC characters feel so real and distinctive? Fashion. The girls spill all about the costuming process: their designer, Cynthia Summers, created a personal mood board for each of the cast that even included pics from their own Instagrams, to make sure every outfit was infused with authentic personality. So, Dawn's skater-girl-meets-boho-vibe? Very much based on Xochi's real-life style. And after the show ended, Xochi actually got to take home a huge collection of Vans sneakers from Dawn's closet.

Actually, all of the girls took home some stylish souvenirs once they wrapped shooting. "We were invited to shop the characters' wardrobes and buy whatever clothes we wanted," Shay gushes. (Jealous!) "That was the most fun thing ever because we literally got to go shopping together. All of us got a little bit from Stacey, a fun colorful thing from Claudia and cool skater stuff from Dawn." Shay points to the pink sweater she's currently wearing—it's from Claudia's wardrobe on set.

The ultra-unique BSC costumes influenced the girls' off-screen style, too: "I remember halfway through filming, Shay came on set looking like an off-duty model, just like Stacey. And I was like, 'OK fine, be that way!'" Malia jokes.

"Stacey's looks really pushed me to find my own style," Shay explains. "I started wearing more blouses and funky skirts and cool jewelry, rather than just sticking to my basic T-shirts and jeans." 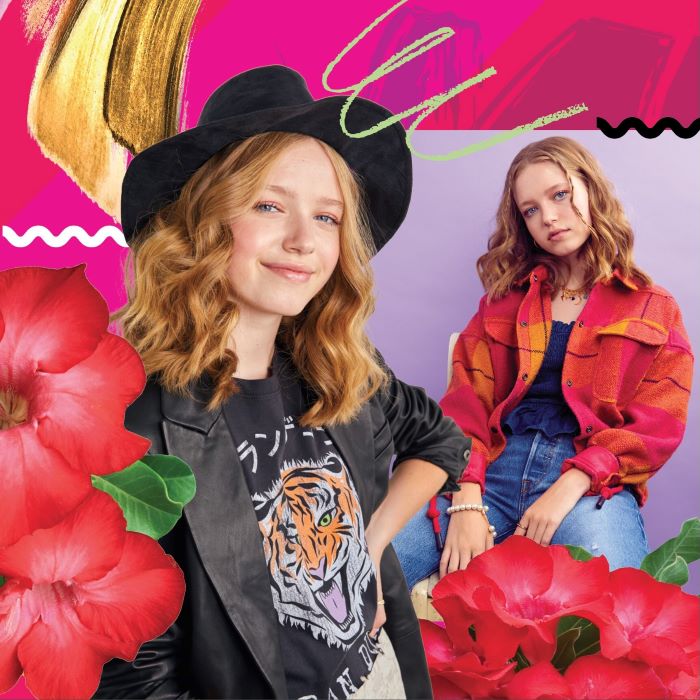 But it's not just clothes the BSC actresses share with their characters: They've all worked as real-life babysitters themselves. So, of course, we had to ask them to spill their craziest stories. Malia and Momo both admitted they almost burned down the house once!

"I was babysitting my sister and my mom told me to turn on the oven. But I didn't realize there were things inside of it, so that all caught on fire," Malia recounts with a laugh. "I mean, it turned out OK in the end. I'm still here!"

Momo jumps in with her own near-miss. "That happened to me, too! I just put everything in cold water and thankfully we were OK," she says. "So that's kind of a horror story. But I love babysitting."

So now that the world has total BSC fever, what's next for the cast? When asked to share their future career goals, the girls go breathless raving about the actors and directors they'd love to work with.

Shay shares her "ginormous dream" of working with Wes Anderson and Greta Gerwig. Malia agrees, also listing Ava DuVernay and Spike Lee as her ideal directors and Saoirse Ronan and Zendaya and her co-stars. "Zendaya is such a queen," piggy-backs Momo.

Going behind the camera to write, produce and direct is also among the girls' ambitions. "Latino representation is really important to me," adds Xochi, who says she wants to work on projects that give the Latinx community a voice. "If there's a Latina superhero concept out there, I'd love to see that," she says with a smile.

This is perhaps the most inspiring thing that Momo, Malia, Xochi and Shay share with their BSC characters: that intense drive to pursue their big dreams, no matter the obstacles. Whether you want to organize your own babysitters club (or start another kind of business), try out for a musical, get involved with activism or manifest starring in a movie with Zendaya, this is their official, Baby-Sitters Club-approved advice: Believe passionately in your ideas (even if others don't at first) and channel your inner problem-solver. 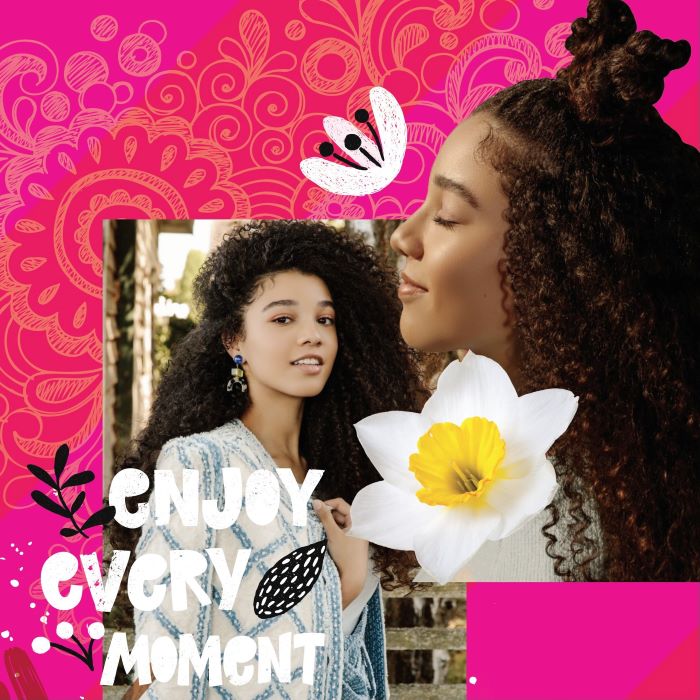 "I remember in elementary school we did an entrepreneur fair, and I sold bath bombs. I learned a lot along the way," Momo recalls. "Sometimes things don't turn out as planned, but you just have to keep bringing in new ideas. I think that's what The Baby-Sitters Club really teaches."

Malia echoes that sentiment with one last wish for BSC fans everywhere: "I think this generation has the potential to do a lot of good. I hope that when young people—young feminists in particular—watch The Baby-Sitters Club, they get inspired to create their own 'big idea,' and put it out there to the world."