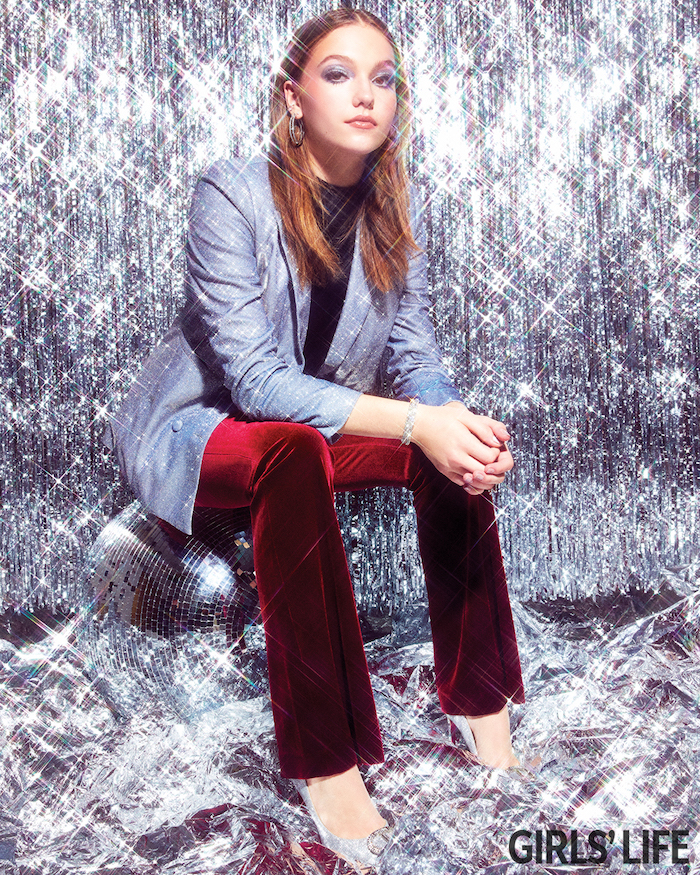 "I say this every year, but seriously, 2021 has been the most insane," says Jayden Bartels, the 17-year-old actress, dancer and social media queen currently starring as scrappy, no-nonsense Presley on Nickelodeon's Side Hustle. "I've really grown in how I present myself. I think people can see who I truly am."

Jayden says she's never had a more dramatic or challenging year...in a good way. There were the highs and lows of running her YouTube channel, headlining a comedy with her bestie (co-star Jules LeBlanc, obvi), getting her driver's license (Olivia Rodrigo wasn't the only one), recuperating from her first major breakup (been there) and graduating from high school.

Basically, the performer-slash-influencer wants you to know the old Jayden can't come to the phone right now: Our girl is coming into her own—and we are here for it.

On some level, everyone can relate. Figuring out your most authentic vibe as you inch toward adulthood is a *journey*, whether you're doing it for the world to see or not. For Jayden, the year between 16 and 17 has provoked the most growth. "Getting older and doing all the things quote-unquote 'adults' do has been crazy," she says nervously. When we ask her to elaborate, she doesn't hold back: "I mean, I completely changed after my breakup," referencing her split from actor Armani Jackson last year.

But nothing brings out your true colors like heartbreak, and Jayden harbors zero regrets. "I'm glad it happened, because I found myself," she states. "If that didn't happen, I wouldn't be as confident as I am now." 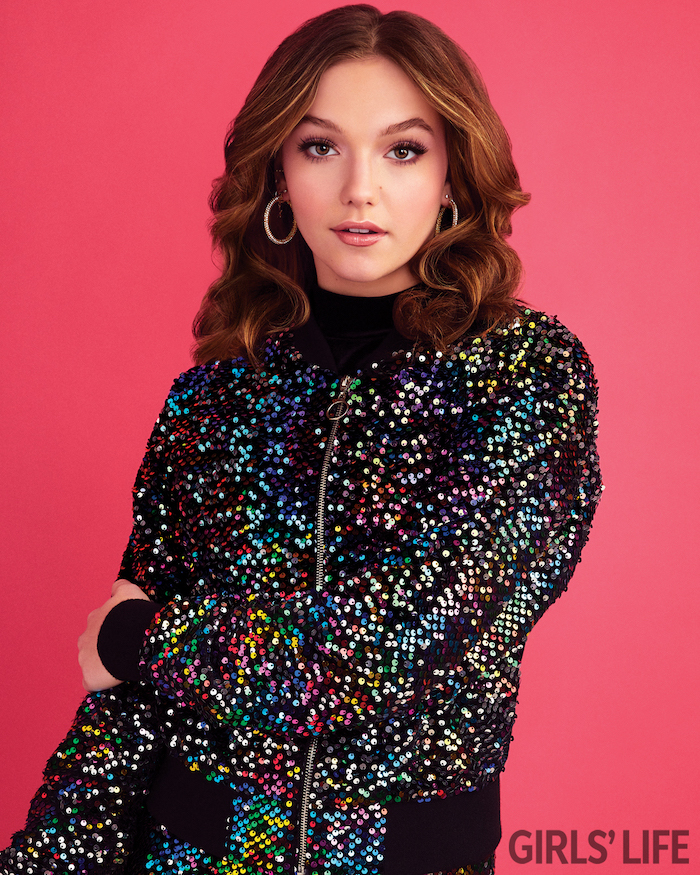 Ever since her career first took off in 2017 with recurring roles in Nickelodeon hits like Nicky, Ricky, Dicky & Dawn and Coop and Cami Ask the World, Jayden has always projected an image of unwavering self-assurance. Brash, bubbly, talkative, stylish...even a cursory look at her social media presence will reveal a fearless fashionista, posed in '90s-inspired plaid crop tops, grunge-y band tees and eyeliner for days. She flaunts a type of It girl energy that no doubt helped her score a starring role in Side Hustle. But *seeming* confident and authentically feeling confident are two different things.

"People sometimes tell me I'm 'intimidating,'" Jayden admits. "Or that they thought I was going to be mean at first, and then I opened my mouth, and they were like, 'Oh, never mind! She's nice!' So yeah, I just don't understand that." (We can confirm that, IRL, the too-cool stare you sometimes see on Jayden's TikTok gives way to an earnest, smiley, totally not intimidating disposition.

She says that the thing strangers get wrong about her most, though, is that she's some sort of overshare-y open book who broadcasts everything about her life online. "I think I come off as very open and honest because I talk a lot and have a lot to say, but there is still way more than I don't say," Jayden assures. "Everyone thinks that they know everything about me, but I'm like, 'You don't even know the half of it.'"

Here's one fun fact about that mysterious half of Jayden you might not know: She loves the holidays and takes gift-giving very seriously. Jayden eschews store-bought stuff, preferring to make heartfelt presents like memory books ("I'll take a marble notebook and pack it full of personalized doodles, quotes, inside jokes and photos," she shares). She's also been known to write original songs just for the recipient. (So, you know, if you were just planning on making your bestie a bracelet...maybe it's time to level up your DIY game.)

But holidays are also a time to contemplate fresh starts: the chance to reflect on the past 12 months and reinvent yourself. Perhaps unexpectedly, in 2022, Jayden is most looking forward to spending time with her OG BFF and #1 fan: herself. "I definitely want to take a trip next year, maybe even alone, to get away somewhere I haven't been before that feels totally unfamiliar," she reveals. (Manifest, girl!)

She also has plans to get more adventurous with her fashion choices. "Honestly, I want to redo my look. I want to get more extravagant pieces, things that are one-of-a-kind," she says, citing Billie Eilish, Olivia Rodrigo and Zendaya as her personal style muses. 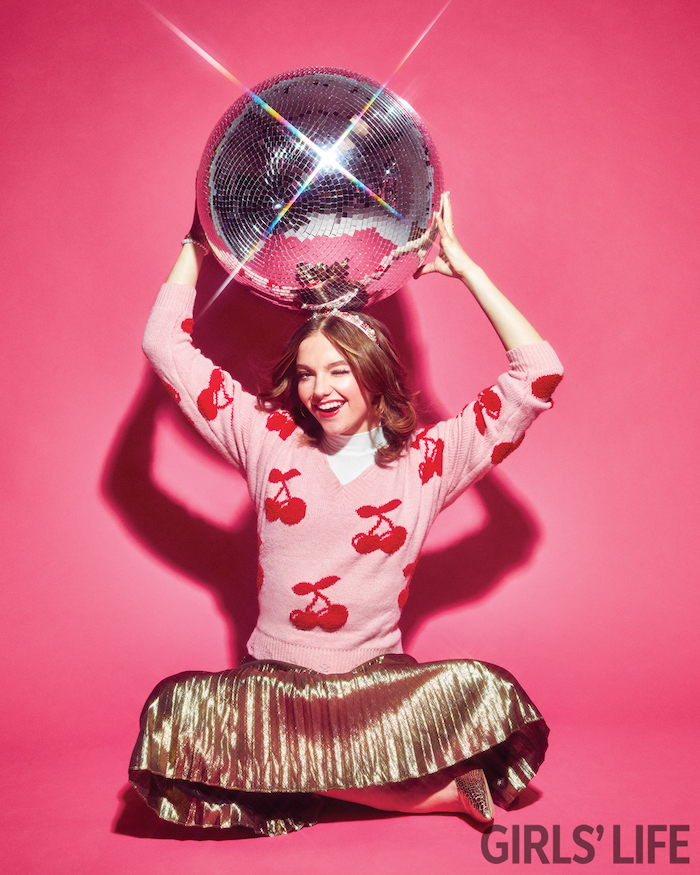 Of course, Jayden has super exciting career-oriented things to look forward to as well, including more episodes of Side Hustle (and hopefully a season three) and a whole new era of music. Jayden says she feels like her most genuine self at the piano, writing and playing her own original music. She promises that her forthcoming tracks will have a much more upbeat, electronic vibe, compared to the no-frills acoustic ballads of her 2019 EP, What Really Matters?. "For the longest time, I could not write a happy song. I didn't know how to," Jayden half-jokes. "So I'm definitely bringing new energy into my music."

And she's transforming the way she does life, too. For Jayden, that means putting herself first and setting boundaries when it comes to the expectations of others—and herself. "I really struggle with knowing when I'm pushing myself too hard, which really affects my mental health," says Jayden. "It's important to know when to give yourself a break."

To start, this past year, Jayden took a big personal step in that direction by announcing to her YouTube subscribers that she couldn't commit to uploading weekly vlogs—that she needed to cut herself some slack. "I feel like a lot of people struggle with boundaries because they feel like they're doing something wrong," says Jayden. "But what I've learned is that, as long as you're not hurting anyone else, people should be understanding and accepting. If they're not, maybe they're doing you more harm than good."

As Jayden evolves into an adult, she's already feeling nostalgic about her younger years. When we asked her what advice she'd give her 12-year-old self, she dryly references some of her, uh, questionable fits from back in the day. "Take those two buns out of your hair! Take off the colorful skinny jeans! Stop wearing tank tops that say cheesy quotes, like 'Live, Laugh, Love!'" she jokes.

But in all seriousness, while Jayden is embracing the idea of growing up, she still hopes to hold on to a piece of her teenage self, well, forever. "I don't want to be one of those adults who seems like they were never a kid," she says. "No matter how old I get or how much I change, I hope I always remember what it felt like to be in this crazy time. Right here, right now."