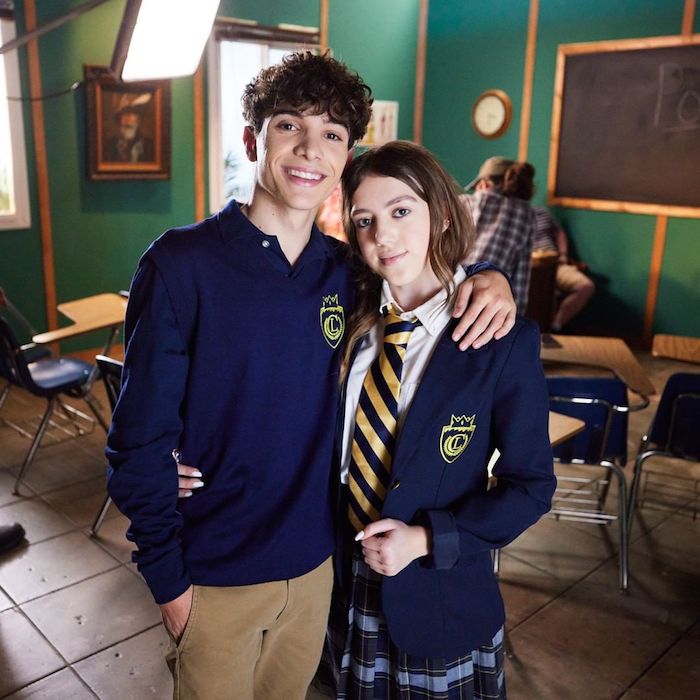 The school year might be winding down, but class is *officially* in session over at Brat TV. The premiere of Crown Lake Season 3 has us all on the edge of our seats, so naturally, we had to sit down and get the scoop on our go-to mystery series. We chatted with our fave couple, Symonne Harrison and Nick Bencivengo, on all things Season 3—and let's just say you seriously won't want to miss even a minute of the drama.

Girls' Life: Tell us about your characters on the new season.
Symonne: I play Molly. She's witty and curious, and she doesn't take no for an answer once she puts her mind to something. And when she finds a clue, she'll do *anything* to get to the bottom of the mystery.
Nick: My character's name is Danny, who's pretty mysterious as well. He's been bullied his whole life because his dad is the janitor, but he ends up finding someone that likes him for who he is. Things fall apart and come back together—but you'll just have to watch to find out.

GL: What was it like being able to work together on the show?
Symonne: Working together made the whole experience that much more rewarding. It was slightly different than when we film our YouTube videos together, but I think I enjoyed the experience a lot more because Nick was there.
Nick: I agree. I think, at the beginning, we were a little bit nervous, and we didn't really know the cast. Thankfully, we were able to read together, even when we weren't on set, and we could hang out after filming and rehearse our lines.

GL: Did you form friendships with your other Crown Lake cast members? What were the vibes like behind the scenes?
Nick: We became pretty close with basically the whole cast. We were filming with them for three weeks straight, so we were all besties—and we still are. Everyone is honestly so amazing in each their own way.
Symonne: Everyone was so nice! We actually just had a premier party, and it was our first time seeing everyone outside of filming. You aren't forced to be best friends with the people you work with, but honestly? It just naturally happens when you're on set. Behind the scenes, someone was always surprising someone else with Starbucks, every morning. That was super fun.

GL: What kind of shows do you like to watch when you aren't filming?
Symonne: Oh, I love mystery shows—Nick knows that's all I watch. Crown Lake honestly reminded me a little bit of Clickbait, the limited series on Netflix. It's one of my favorites, and I feel like it was kind of similar to Crown Lake, which is pretty cool.
Nick: I like watching mystery movies too, but something I love to watch that *isn't* related is Selling Sunset. And filming Crown Lake honestly got me into mystery shows even more.

GL: And, most importantly, what do you hope the fans heart about the show?
Nick: I hope people love the new cast. I think that fans of the show should have an open mind because we're all pretty cool, and we're all working super hard together.
Symonne: I would just say to watch the season closely, because there's the main plot, but there are also a lot of mini story lines that explain what's happening with each character. This season addresses a lot of important issues, like bullying, and one of the characters even comes out. Without giving too much away, I just think it's really important that we highlight these things so that people can take away actual lessons from the show.

GL: Amazing. And what are you most excited for this summer?
Nick: We're doing a tour across the U.S., so I'm really excited to travel and meet the fans. That's going to be such a blast.
Symonne: I was going to say the same thing. Touring, coming out with a new song...and I'm sure we're probably going to go on vacation again. A *lot* of exciting things are happening soon.

Slider image via @brat on Instagram | Parts of this interview were edited and condensed for clarity.