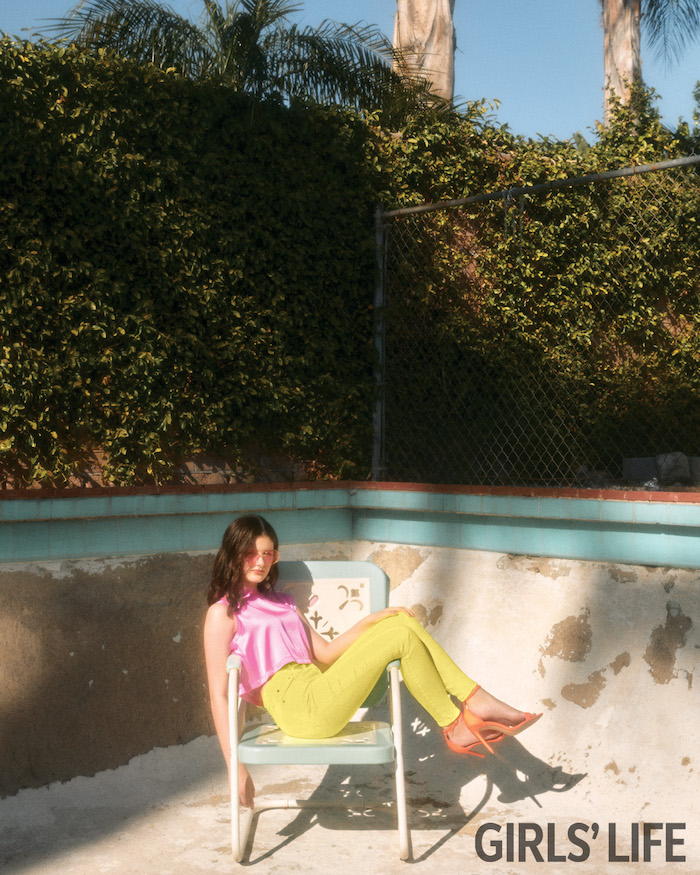 She's a YouTuber, actress and author—and hasn't even started high school yet. Now she's ready to write her own story.

It's a scorching summer day in southern California, and Hayley LeBlanc is in the middle of a serious Main Character Moment. It's not just her starring role on Brat TV's hit Chicken Girls (where she just wrapped her iconic turn as Harmony *sheds tear*), the fact that she's been a beloved YouTuber since she was barely in preschool or even her effortlessly cool aesthetic (hanging out in an abandoned pool, snacking on Bomb Pops, as you do).

After a year that, in her own words, has been her most important yet ("I'm a teenager now, which is crazy!" she says), Hayley is leaping into what might be her biggest adventure to date: releasing her very own book.

The Hayley Mysteries, a three-part series whose first installment The Haunted Studio hits bookstores tomorrow, takes place on a television set (where the fictionalized version of Hayley is the star, ofc) that's (gasp) haunted by ghosts.

Yes, Hayley may have accomplished so much already in her 13 years...but in so many ways, her story is really only just beginning. 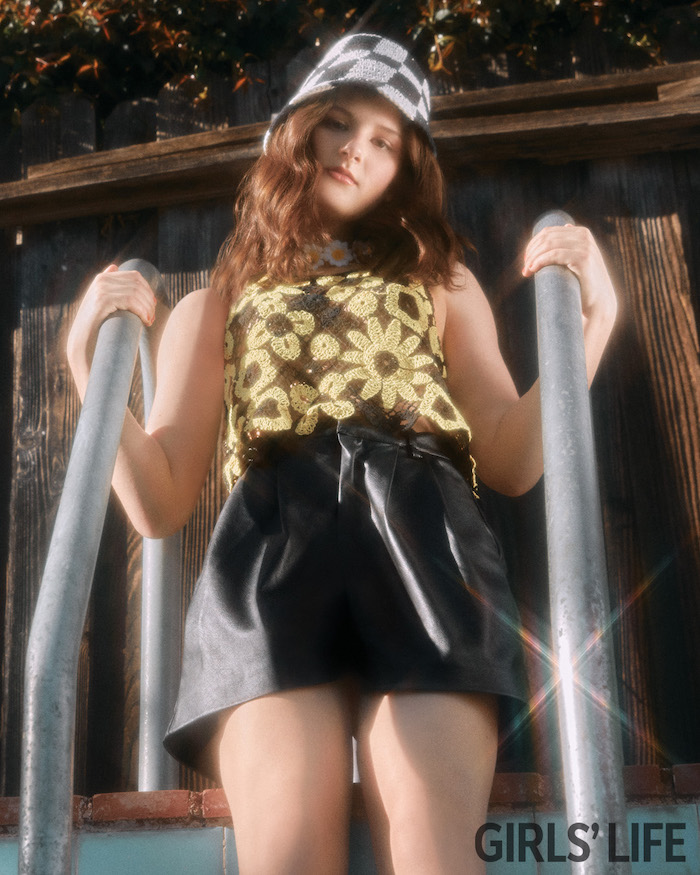 For someone who grew up in the public eye (Hayley's day-to-day childhood moments were chronicled on her family's vlogging channel Bratayley from 2011 to 2019), Hayley always saw reading and writing as a way to escape into her own world.

On long summer afternoons with no homework in sight, she'd lose herself in page-turning series like Percy Jackson, Nancy Drew and The Maze Runner. "I love anything with sci-fi or psychological elements," says Hayley.

When she wasn't reading, filming YouTube vids or practicing gymnastics, Hayley would jot down her random musings, observations and doodles in a journal—though she didn't keep any strict rules about it. "You don't have to be that person who writes in a diary every single day to consider yourself a writer," she shares. "It took me a while to realize that."

In 2017, Hayley and her family took off for Los Angeles so she and her older sister Jules could pursue their fast-rising careers in Hollywood. Taking on roles like Harmony in Chicken Girls and MANI and Jazzy in Hotel Du Loone, Hayley instantly felt at home on set.

As Harmony went from a sassy, spunky elementary school kid to a headstrong, thoughtful teen, Hayley leveled up, too—and resolved to use her platform to help tell the stories she found important and valuable. "In the later seasons of Chicken Girls, I had a lot more input in the story direction," Hayley reveals, explaining that she pushed for a focus on the friendship and personal growth for her character ("The kind of thing I'd want to watch," she shares), instead of just crushes and drama.

Her final season (streaming now) marks the end of an era. "It was bittersweet, and I actually did cry a little bit," Hayley admits. "I filmed Chicken Girls with my sister, made my best friends and really grew up on that set and with that character."

Now that her time at Attaway has come to a close, Hayley can shift her focus to The Hayley Mysteries. Not only do the books combine all her loves (from showbiz to the supernatural), but she also brought her besties into the plot...kind of.

"My characters are loosely based on some of my friends, like Aubrey reminds me a lot of Skyler [Aboujaoude] and Corinne [Joy] and Cody is kind of similar to Santiago [Carrera] and Liam-Alexander [Newman]," she explains.

Though her book's leading lady obviously captures elements of Hayley's personality ("I'm loyal, supportive, a mix of introverted and extroverted and funny," she says of her IRL persona), she admits that she's not always looking to be the star.

"Side characters are always cooler. They can make jokes and be chill," Hayley notes. "Everyone secretly wants to be the side character! But when it comes to your life, you should have the mindset that you're the main character in your own story. Because you are—it's your life."

With warm temps, vacay, her book release and pool days on the horizon, Hayley's day-to-day is v. far from the spooky worlds she loves to imagine. "I'm just trying to live my best Pogue life!" she says of her summer '22 goals (IYKYK, but in case you don't, it's an Outer Banks thing).

For Hayley, that "best life" means adventuring with Corinne, Liam, Santiago, Skyler and the rest of her squad ("we love roller skating, doing escape rooms, and thrifting"), catching up on the new season of Stranger Things, taking a long-awaited beach trip to Cabo San Lucas and celebrating the chance to finally see her own words on the page. Up next? Hopefully more books, more acting roles (comedy and drama), going to high school IRL and maybe even starting a makeup line.

These days, Hayley steers clear of social media for the most part. "Honestly, when I stopped posting a lot, I kind of stopped caring or thinking about the comments," she explains. And she's basking in the happy vibes, hyping *herself* up ("just use positive affirmations, over and over, until you start believing it," she shares) and finding the strength within to ditch anything that brings down her brightness.

The story of Hayley LeBlanc? It's just starting—and we can't wait to read the next chapter. 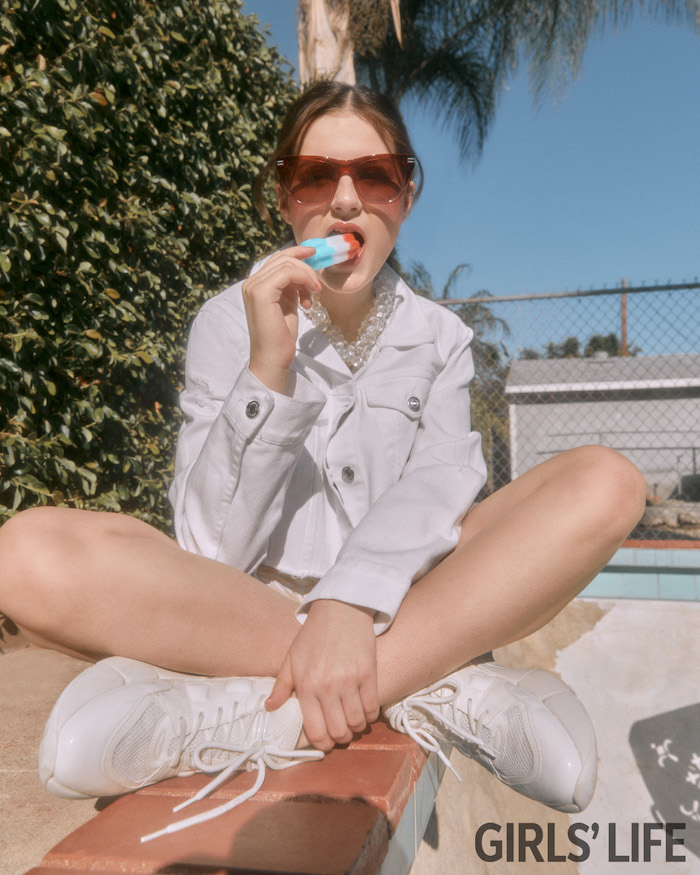