CHECK OUT OUR EXCLUSIVE INTERVIEW WITH SYDNEY WHITE'S CRYSTAL HUNT! DON'T FORGET, IT HITS THEATERS TODAY!!!
GL: Can you give us a peek to what’s in store for your fans in your new flick Sydney White?
Crystal Hunt: Sydney White is a really fun movie. It’s centers around a sorority in college. I play a character called Dinky. She is absolutely obsessed with her sorority. Anything that you can have or do for your sorority, she has or does it. Her room is literally decorated from top to bottom in sorority colors, gear, etc. It’s almost scary how obsessive she is.
GL: Tell us a little bit more about the character you play?
CH: Dinky has a big personality. She’s really short so she has crazy, big, poofy hair to make up for her height. What she lacks in height, she makes up with hair. It was really funny because Amanda Bynes and Sara Paxton are all really tall, and here I am just 5’4’ with huge hair. She’s also this girl from the south and so I had to play her in a southern accent, which was also really funny, too.
GL: Did you have to practice with a coach?
CH: No, not really. My mother has a really strong southern accent, so I’ve grown up making fun of her. [giggle] Since I was always impersonating her and joking around, it wasn’t hard to just pick it right up.
GL: It must have been really fun playing such a character. How are you similar, if at all, to Dinky?
CH: Well Dinky’s always getting into scrapes like me. She’s falling here and there. She does a lot of physical comedy. I’m sort of like that, too.
GL: Did you get hurt at all shooting any scenes?

CH: No, thankfully I didn’t. Well other than the occasional trips and fumbles.

GL: Just like in the movie, a lot of girls out there face the same kind of issues with cliques and peer pressure. Do you have any advice on how they should deal?
CH: I have tons of nieces and nephews and I actually give them advice about this all the time. I always tell them that it’s just high school. These people aren’t going to be with you your whole life and they aren’t going to define who you are. So don’t give in to all the drama that comes along with it because it’s so not worth it. Your time spent in school is so small compared to the rest of your life.
GL: It must have been a blast working on set with so many great actors. How was it like working with Amanda Bynes?
CH: Omg, it was so much fun. Amanda is just the sweetest person you’ll ever meet. We actually got really close onset and got along great. We’re both really similar. We both don’t like the whole party scene and we both don’t do late nights so we had a lot in common. We hung out a lot just chatting and giggling. GL: Can you share any onset embarrassing moments?
CH: I can tell ya there was this one scene
where Sara Paxton comes into our rooms
and starts to yell at us and I don’t know
what it was, but all us girls and Amanda just
started busting out laughing. And then from
there we just sort of got the giggles and
couldn’t stop. It was really late at night and
everyone got so mad at us, but we just
couldn’t control ourselves. We were laughing
so hard that make-up had to come onset and
retouch all our faces. Can you imagine how
mad they were at four in the morning having
to deal with 15 giggly girls?
GL: It definitely sounds like you had blast. Now you spent a lot of time working in television, was it hard for you to switch over to movie mentality?
CH: Well working in television is really good because you have like a consistent schedule. It’s like a regular job. But shooting movies can be a little crazy because you are up into the wee hours working and by a certain point you just get delirious. One day you might just shoot a couple scenes and the next you’ll be up all night. I remember one time, we’d only shot like a couple of scenes and the workday was over. I was like, ‘What? That’s it? I can work more!’ That would never happen on television. But movies are good too because once you wrap up you can have a good long vacation.
GL: Which do you prefer?
CH: I definitely like movies. I love how the movie set is so much like a family. You really get to be close with all the actors and the crew.
GL: You started acting at a really young age, do you have any advice for girls who wants to make a start in the business?
CH: I would say that you really have to want it and then just to go for it. You should go out there and do as much as you can and experience everything that you want to. You really just have to want it.
GL: What are some of the things that you like to do when you’re not filming away on set?
CH: Well I have daily schedule. First, I always make a run for it to Starbucks. I need at least three cups of coffee a day. I’m so addicted to coffee, but hey, I can be addicted to worse things. Other people have their vices, mine is coffee!
GL: Wowza! What’s your favorite drink?
CH: The Green Tea Frappuccino. Omg, it’s so good! They put melon in it for you and it’s absolutely delicious. They have other flavors too that are really good. You have to try it!
GL: Sold. I’m going to have to check it out. So what’s next on your list of to do’s?
CH: Well it’s just been so crazy with the movie. Our premiere is tomorrow and then my sister just had another baby so I’m going to fly out and see her right after. I have nine nieces and nephews and I just love them to death. I don’t know what it is but everyone around me is having one. I mean I’m so not ready to have one yet, but I love being around them. They are so cute. But once I coo and aww, it’s definitely back to their mommy.
GL: Do you have any celebrity crushes?
CH: Ok, I have two celebrity crushes, they are actually the polar opposite of each other. The first one is Orlando Bloom. He is so hot! And the next is Adam Brody. I was so happy when I heard that he broke up with Rachel Bilson. I mean she seems really sweet and all, but ya know…
GL: I know you’re involved with a volunteer organization, can you tell us a little bit about them?
CH: I work help out an organization called ChildHelp. It’s an place where abused and battered children can go. These shelters are full of so many children that have gone through terrible things. And I absolutely love them all. They are so cute. Every time I go there it’s so hard to leave them. I just want to take all of them home with me.
GL: What do you think young girls can do to help?
CH: They can go anywhere and volunteer to help other kids with their time. It’s so rewarding to see the looks on their faces and you’d be surprised at how so little goes such along way.
WANT MORE SYDNEY WHITE? Click HERE to get the 411 on this fall's hottest flick, in theaters September 21!
QUIZ! Should you join the Sydney White sorority? Click HERE and find out now! 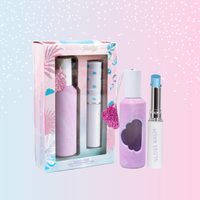 Dreaming of an amaze vacay? We're ringing in the holiday szn with our biggest giveaway of the year: a fabulous getaway to Nickelodeon Hotels & Resorts Riviera Maya plus a prize pack of beauty goodies, featuring this Petite 'n Pretty Cloud Mine Lip + Fragrance Duo. Click here to enter!