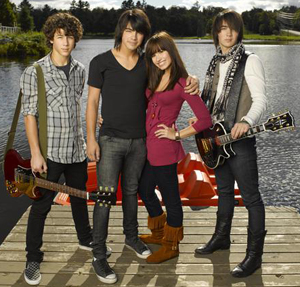 Counting down the days ’til the Camp Rock 2 debut? Us, too! But while we’ll continue to have to sit tight until this summer, we just had to dig up some dirt from the flick—straight from cutie patootie Nick Jonas’ mouth!

The new movie, Nick says, has changed a bit from the first one: “In the first one, the music was in the movie. This one, the music tells a story, a bit more like a musical. But it’s a lot better I think.” In summary, the camp has some fierce competition with a new camp across the lake. Kevin rocks out with the junior rockers (including Frankie Jonas!), Nick finds a new love interest (played by Chloe Bridges) and, of course, the romance between Joe and Demi continues…

Nick also spilled on one of his performances in the film: “I have a funny Adam Sandler-type song in the movie,” he dishes to GL. “It'll be really interesting for people to hear it and see what they think because if I hear it without being in the movie, I would be like, 'What is this?' But it works in the movie, and it's a cute moment." How ah-dorable!

We can’t wait for Camp Rock 2, and we know you can’t either. We can’t even wait for Nick’s upcoming January solo tour with The Administration!

WANT EVEN MORE NICK JONAS DIRT?
Be sure to check him out in our upcoming February/March issue, where he dishes on his new songs and love.


In the meantime, check out  a personal shout-out from Nick Jonas to YOU!