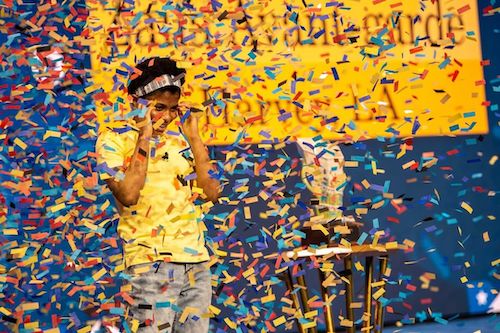 On Thursday, July 8, 2021, 11 of the best middle-school-aged spellers from around the country came together to compete in the Scripps National Spelling Bee. The preliminary, quarterfinal and semifinal rounds took place virtually and narrowed down the 209 competitors to 11 finalists. The final competition took place in person at the ESPN Wide World of Sports Complex at the Walt Disney Resort. Nearly 555,000 people watched on ESPN and there were several spectators in person, including First Lady Dr. Jill Biden.

You're probably wondering—who took home the $50,000 cash prize, medal and Scripps Cup? The champion is none other than Zaila Avant-Garde, a 14-year-old girl from Harvey, Louisiana. Along with the aforementioned prizes, she also took home an additional $2,500 cash prize and reference library from the Bee's dictionary partner, Merriam-Webster, as well as an additional $400 of reference, works from Encyclopǣdia Britannica and a three-year membership to Britannica Online Premium.

She was coached by Cole Schaefer-Ray, a 20-year-old college student at Yale University and 2015 runner-up. While typical Bee contestants can start training as young as kindergarten—often for up to 10 hours a day— Zaila has only been training for the past few years. Her knack for spelling came from her problem-solving skills in math. She approaches words in a different way than most other spellers: "She basically knew the definition of every word, like pretty much verbatim, she knew, not just the word but the story behind the word, why every letter had to be that letter and couldn't be anything else," said her coach.

Speller Zaila Avant-garde made history when she correctly spelled the word Murraya,  more commonly known as orange jasmine. She says she was able to spell it correctly because she connected it to actor and comedian Bill Murray. One of 11 finalists, she is the first African-American to win the Scripps National Spelling Bee, the first winner from Louisiana and the second Black contestant to win since 1998—the first being Jody-Anna Maxwell from Jamaica.

Zaila tells CNN that she hopes to play basketball at Harvard before pursuing a career at NASA, as a coach for the NBA or in neuroscience or gene editing. We're confident she'll be able to achieve anything she puts her mind to!

This is the National Spelling Bee champion pic.twitter.com/8DnJLytG7H

Have you ever competed in a Spelling Bee? Tell us on Twitter @girlslifemag