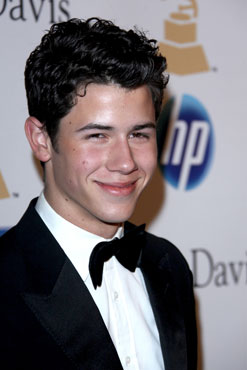 Who's talented, humble and way too cute for his own good? Nick Jonas of course! Ha, like you even had to ask.

Last night, he held a free acoustic show in a totally presh coffee shop around Washington D.C. But, don't ya worry, we were totally there.

Why a free concert? Tonight, the youngest JoBro will be performing with other awesome singers like Jordin Sparks in a Motown tribute concert for President Obama in celebration of Black History Month. So what better way to calm his nerves before the big night than to do something a little extra special for his fans the night before.

The last-minute gig, which Nick announced on his Twitter page yesterday afternoon, was def laidback and chill, with fans on their most quiet behavior! Wait, a Jonas in the house and no real screaming?! Totally weird.

Nick and John Taylor (of the Jonas Brothers band) sang and strummed to a number of our fave tunes: “Before the Storm,” “Lovebug,” “SOS,” “Who I Am” and “Last Time Around” to name a few. He even performed his song “London Foolishly,” which has yet to be released.

Although the show wasn't until 11 p.m., moms and dads had no problem getting their daughters there. Guess they knew it'd be worth it! And even after all this time, we still find it hard to believe the talent this brunette cutie has. Sigh. Come back, Nick, and give us some more!

What’s your favorite Nick Jonas song? Did you go to the concert? Blog about it, babes.