What's one thing we want for Xmas? Il Volo! 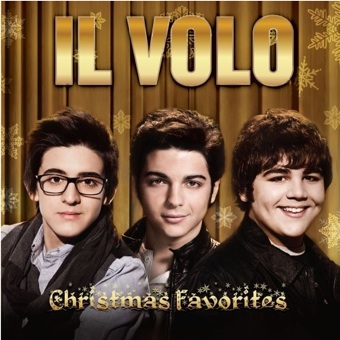 They’re the first Italian band to sign with Geffen Records (the same label that works with Greyson Chance, Lifehouse and Ashley Tisdale!), and their debut album landed stateside this past April. But now the trio’s back for a seasonal treat you’re bound to enjoy!

The gang’s version of “Silent Night” left me wondering how such seemingly sweet boys could hit such incredibly high notes!

“Christmas Medley” is a mash-up of “Jingle Bell Rock,” “Let It Snow,” and “It’s The Most Wonderful Time of the Year,” and you won’t believe their amazing harmonies.

And when American Idol favorite Pia Toscano joins the boys on “The Christmas Song,” you’ll find yourself wondering if the acts could be a band had Pia been born on the other side of the pond (their voices seem to compliment each other perfectly.)

While I’m blown away that the boys have released singles in Italian, English, Spanish, and German, I’m even more impressed by the way they make singing opera sound so effortless.

Be sure to check out Il Volo’s Christmas Favorites EP. Then come back and let us know your favorite track.

Are you an Il Volo fan? Blog about it, babes.
Heart this post? You’ll love these, too!