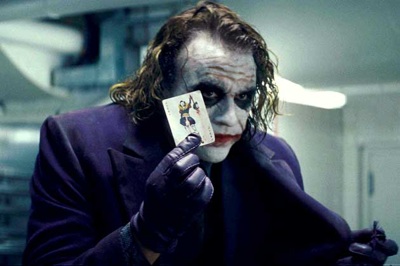 This Friday the 13th, we’re not freakin’ over black cats, ladders and mirrors. Nope, we’re gettin’ creeped out by the creepiest characters from our favorite movies. We’ll take the boogey man over these 13 baddies any day!

Samara from The Ring

Toshio from The Grudge

Why is it that kids in scary movies are always the creepiest? This little boy from The Grudge is no exception to that. The sounds he makes are so strange. The way he just pops out of nowhere can give you a heart attack.

His face is enough to make you want to turn away, but his hands, nails, and evil stare make you want to completely run away! Maybe if he didn’t look so nasty, Voldemort wouldn’t have been so mean to everyone. Who knows, still super creepy.

He doesn’t speak. He simply stares creepily at people. The worst part though? He likes to rip out people’s hair. Um, he is way too creepy.

The Joker from The Dark Knight

The late Heath Ledger played the role of Joker to perfection. By this we mean that he was so creepy! From his gelled out hair to his painted face to his beyond creepy smile. This is one creepy dude.

This is one of the creepiest characters who is likeable at the same time. He is strange and gives you goose bumps, but is funny too.

Wicked Witch of the West from The Wizard of Oz

If this character were real, you’d have to make sure that you always carry water on you because you definitely don’t want this creepy witch getting too close to you.

Eunice from She’s The Man

Okay, so she’s no witch, Joker or Voldemort, but she definitely has a creepy personality. She means to be sweet, but it just comes off so totally wrong. She stares at people. She breathes heavily. She gets too close. She is obsessive. She stalks. She is way too creepy for her own good.

Count Olaf from The Series of Unfortunate Events

Definitely wouldn’t want to have this guy as part of your family. He will use every trick in the book, as well as a few others, to ruin your life. One creepy day at a time.

Not only is this woman incredibly mean to every single one of her students, but also she makes it even worse by being creepy while doing mean things. She runs after kids, screams at them, laughs eerily and makes really crazy faces. Plus, her office, house and hidden passageways are really creepy.

Oompa Loompas from Willy Wonka and the Chocolate Factory

With their deep-orange skin, gross green hair and thick white eyebrows, these characters are about as a creepy as it gets. When they start singing and dancing, they just bring their creepiness to a whole new level.

This boy has some problems. He has to stop messing with dolls heads and using his creepy laugh. This boy could scare anyone off, no matter how old.

Mad Hatter from Alice in Wonderland

Johnny Depp has a talent for playing really strange characters and he brings this talent to the role of Mad Hatter. This character is really creepy and weird, but you kind of root for him and like him at the same time. He’s still creepy though.

Which character do you think is the creepiest? What would you do if these characters came to life? Blog about it, babes.
Love this post? You'll heart these, too!