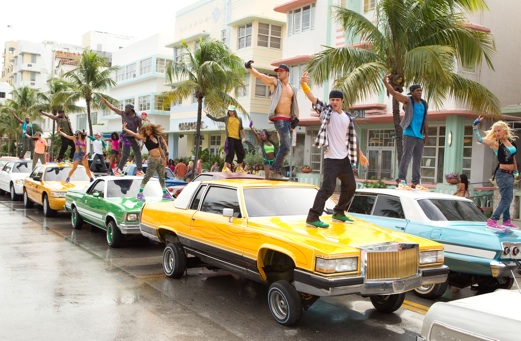 Think your summer isn’t hot enough? Then you might want to head to theaters this weekend and see Step Up: Revolution. The fourth installment of the hit Step Up franchise hits screens today—and this time, it’s bringing the Miami heat.

I know what you’re thinking. A fourth installment? Without original Step Up hottie Channing Tatum anywhere in sight? Sure, it doesn’t sound promising. But when I chatted up stars Ryan Guzman and Kathryn McCormick a few months ago about the flick, they assured me it keeps in line with the story and dancing we love from the original…multiplied by like 10. Still, I had to see it for myself. And, of course, they were right.

The story follows Sean, a waiter at a swanky Miami hotel, who lives with his sister and niece in a not-so-swanky neighborhood, just trying to make ends meet. On the side, he spends his time with The MOB—a local dance crew notorious for concocting jaw-dropping flash mobs around town. And when the group has a chance to score a load of cash in an online competition, they tap into their creativity even more to try and secure the top amount of YouTube hits to win.

Dance starts to take on a different purpose, though, when Sean meets Emily. Arriving in town with her wealthy real estate developer dad, she has aspirations to land a spot at the prestigious Wynwood Dance Company. So when advised by the head of the program to find originality, hanging with Sean and his dance crew buds for inspiration is exactly what Emily thinks she needs.

But when Emily’s dad comes forward with a plan to develop Sean—and The MOB’s—neighborhood, displacing thousands of residents and business owners, Emily goes against her father and suggests The MOB use their new viral fame to help take a stand. Using dance as protest art, the gang tries to make their voice heard. Will they succeed?

Sure, Step Up: Revolution has a predictable storyline (and the acting could use some tweaking), but when you’re caught up in the amazing dance routines, it doesn’t really matter. From hip hop and salsa to contemporary, popping and locking and a few Cirque du Soleil-esque aerial tricks, well-choreographed numbers explode in backgrounds like Miami’s Ocean Drive, an art gallery and a corporate lobby, throughout the flick—all flying at you in 3-D. And you won’t want to miss the over-the-top final dance number, with bungee cords, sparks, trampolines…and a cameo by Step Up 3D fave Adam Sevani.

Simply put, Step Up: Revolution will make you appreciate dance even more. The athleticism that goes into it, its artistic beauty, the fact that it can be used for so many purposes. And, who knows, the flick might even inspire you to make your own opinions be heard.

Catch a sneak peek of the flick below…
Are you a Step Up fan? Which of the flicks has been your favorite so far? Blog about it, babes.
Loved this post? You’ll heart these, too!