Who landed the Girl Meets World role of a lifetime? 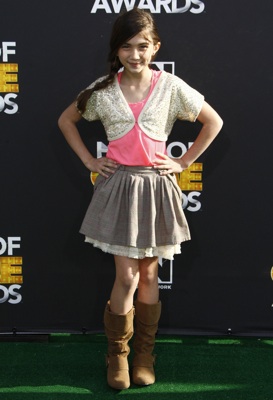 Once upon a time, back in the '90s, there was a beloved sitcom called Boy Meets World. It starred a boy named Cory and his longtime love Topanga (sweet name, right?).

Flash forward to 2013 and meet their 13-year-old daughter, Riley Matthews! Disney begins filming the pilot for Girl Meets World (a spin-off of the Boy Meets World phenomenon) next month. We came up with our own predictions a couple months ago for who we think would be great for the role, but Disney has gone and cast someone we think is even better!

Drumroll, please…it’s Rowan Blanchard. You might've seen this now 11-year-old actress in Spy Kids: All the Time in the World.  But get ready to see this lucky tween share the small screen with the original show's stars, Ben Savage and Danielle Fishel.

If all goes well, we'll get to tune in to see Girl Meets World (a TV show from Riley’s point of view) sometime in the next year.  But while we wait, we're happy to sit back and enjoy our fave reruns of the hit show. Meet Minkus, Eric and Mr. Feeny, and you'll be more excited than ever to meet Riley—promise!

Are you a Boy Meets World fan? Do you think they did a good job of casting for the role of Riley? Share in the comments below.