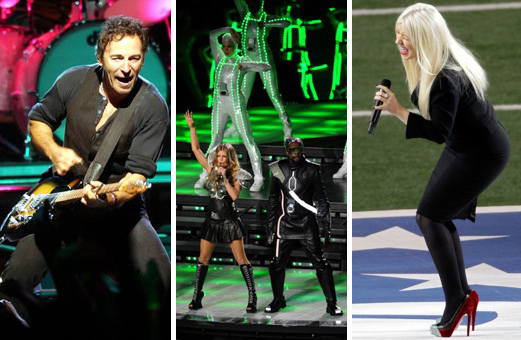 Mega-starlet Beyoncé Knowles is scheduled to take on the half-time show tomorrow night in this year’s Super Bowl performance line up, and we couldn’t be more excited! With a set list rumored to include “Crazy in Love,” as well as a reunion with her former Destiny’s Child sisters for “Survivor,” it’s one not to be missed.

As we all know, the Super Bowl isn’t just any show. Mrs. Jay-Z will be following directly in the footsteps of many of the music industry’s most iconic individuals, having to hold her own against some truly famous performances… and some of the nation’s most memorable gaffes.

That’s right, Super Bowl anthem and half-time show mishaps are almost as legendary as the people who made them. Here, we’re listing some of our faves. We sure hope the lovely B won’t be joining this list come tomorrow.

Perhaps the best remembered of all live show bloopers is Janet Jackson’s infamous wardrobe malfunction in 2004. The show featured a collab between Janet and Justin Timberlake. And while the duo were performing their medley, the former ‘N Sync boy bander accidentally pulled off part of Janet’s bustier! The “malfunction” only aired for about half a second before CBS broadcast cut to an aerial shot of the stadium, but those few moments are still one of the most sought after video clips of all time. Of course, it didn’t exactly help that the backlash of lawsuits, public controversy, and indecent exposure legislation kept the incident more newsworthy than the Super Bowl itself for countless weeks (and years!) afterward.

In 2009, the half-time show was almost over before it started when Bruce Springsteen overshot his knee slide and slammed into an off-stage camera. Mr. Springsteen later reassured the press that he was fine, and that he just got a little too excited, but we’re sure everyone in that audience was expecting him to keel over at any moment. Instead, what they got was one of Springsteen’s best performances ever. Talk about a quick comeback!

Elvis Presto – When You Can’t Have Elvis…

Remember that one time the NFL got an Elvis impersonator to sing none of Elvis’ songs and perform a series of really over-the-top magic tricks? Yeah, that happened. The budget might have been smaller in 1989, but there’s really no good explanation for the puzzling show.

Surely everyone remembers the half-time show of 2011: the Black Eyed Peas were headlining, they were going to be great, and everyone was so, so excited to see what they had in store. Two minutes of obvious auto-tuning, light-up jumpsuits and listening to Fergie belt out everything off-key later, and that excitement had waned. To be fair, the majority of the Peas’ problems stemmed from technical issues out of their hands, and they later admitted that the performance wasn’t one of their greatest. Still, light-up jumpsuits? Really? 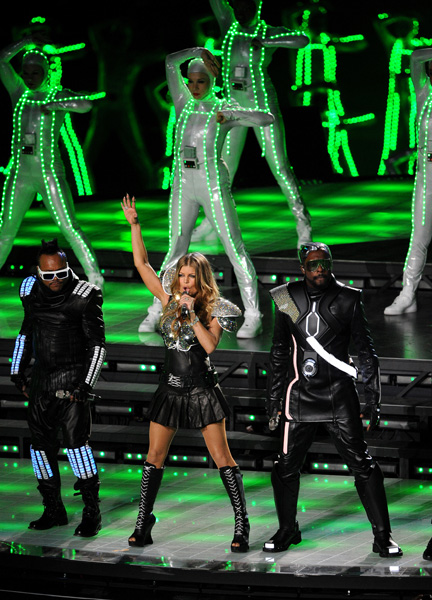 Christina Aguilera – Caught in the Moment

2011 really wasn’t a hit year. Perhaps even more memorable than the Black Eyed Peas was Christina Aguilera’s bungling of the national anthem…twice. The singer later issued an apology, and claimed nerves as the culprit. But, as it was on the incredibly hyped and heightened Super Bowl stage, we don’t think anyone, including Christina, will be forgetting about it any time soon. Watch it below…

What’s your favorite Super Bowl performance blooper? Share in the comments below.

+ Lea vs. Chloe, Zen vs. Carly: Who ruled the red carpet?

+ Sunny songs to get ya through winter