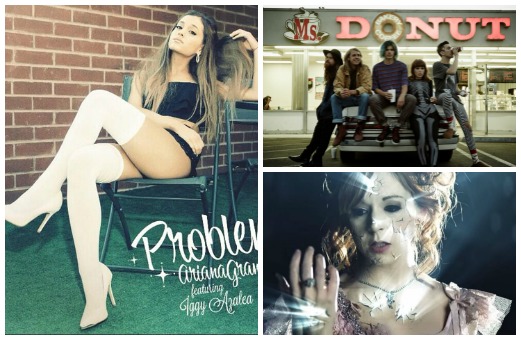 We heart new music, and we know that you do too so that’s why GL is bringing you the best music and lyric vids from this week. Take a break from that geometry worksheet and set aside your textbooks, cause you’re in for a treat with these killer tunes.

Our girl Ariana is at it again with another hit. We totally loved “The Way” and “Right There,” but her newest track “Problem” is on a whole new level. Proof: It debuted at #1 on iTunes in the US, Canada, Australia and more. Not to mention Aussie rapper Iggy Azalea is featured on the track and adds some serious attitude.

“Let Me In” by GROUPLOVE

This tune is one of the many ah-mazing songs featured on the soundtrack for the soon-to-be released The Fault in Our Stars flick. But by now we’re pretty sure you’ve heard us gab about the film a ton, so we think the soundtrack deserves some love too. There’s no way to describe GROUPLOVE’s “Let Me In” other than “lovely.”

This song is almost too impressive for words. In the video, Lindsey lives as a ballerina inside a restricting snow globe and plays her violin. But when she becomes fed up, Lindsey shatters it all—literally. Lzzy Hale’s stunning voice combined with Lindsey’s talents makes the song a truly intense and powerful experience.

To be honest, we just can’t get enough of Becky G at the GL HQ. Not only did our latest cover girl dominate at the RDMAs last weekend, she just debuted her brand new single “Shower” and we couldn’t be more giddy. It has Becky’s signature sassy and bossy attitude, but it’s still filled with many sweet moments. Take, for example, these lyrics: “You light me up inside like the 4th of July. Whenever you’re around I always seem to smile.”

We are in L-O-V-E with Lorde’s individuality, but we’re completely digging this remix of her jam “Tennis Court” by Flume. It was rumored that Flume had remixed Lorde’s track, and the DJ confirmed it during his recent Coachella set. Taking on an already awesome song was a bold step, but it was definitely in the right direction. It put him on our radar, and now he’s on yours too.

We’re constantly gabbing about how much we love Bea Miller but we just can’t help it—she’s just a regular girl but so fierce! We’re especially obsessed with her “Young Blood” tune. In this title track from her new EP, Bea really shows off her pipes. This song is super chill so we def recommended it for those upcoming summer nights with your crew.

What do you think of these new tracks? Which one is your fave? Let us know in the comments below.