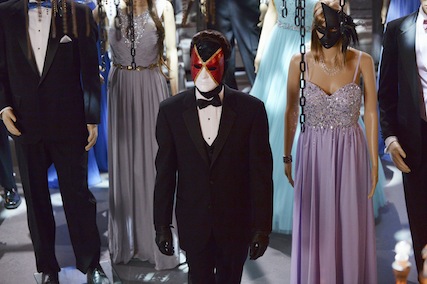 Season 6 of Pretty Little Liars has kicked off with a bang, and it seems we are finally going to get answers to a few of our many questions. Although we still don’t have a name for A, the episode "Songs of Innocence" put us a lot closer. Our biggest question now: Who is Charles DiLaurentis?

I. Marlene King, PLL's showrunner and creator, has stated that we have already met A, and that we saw him or her in the season 5 finale unmasked and without the hoodie. Many fans of PLL have been trying to come up with theories as to who Charles (and A) could be.

Here are our top two theories based on all the whispers we’ve heard:

Jason Has A Secret Twin

SPOILER ALERT: Remember in the books how Ali has a secret twin that we had never seen or heard of? Well, what if it’s Jason with a twin on TV? The show has already deviated from the plot of the books, but it makes sense that they’d find inspiration from author Sara Shepard’s story. After all, why else would everyone be calling him a DiLaurentis? Could he be the other boy that was shown in the home video found in the dollhouse?

Andrew Campbell is a Younger DiLaurentis

Lately, Andrew’s been pretty shady in the show, and it’s almost too apparent that he might be A. Considering PLL’s history of misdirection, this could easily mean he’s not really A, but he stills seems to be the best candidate for the role, especially considering that the house shown in the home video is called Campbell Farms. Could it be that Mrs. DiLaurentis had yet another affair and child to hide like Spencer suspects?

Unfortunately, we’ll have to wait to find out if either of these theories are right, but with a time skip to post-college life in the plans for Season 6 (and considering this is the #SummerOfAnswers), we have a sneaking suspicion that we might know sooner than we think. And we can’t wait to finally find out!

Who do you think Charles/A is? Got any other theories for the show?