Exclusive: Teen Beach 2 stars tell all about their thoughts on the movie 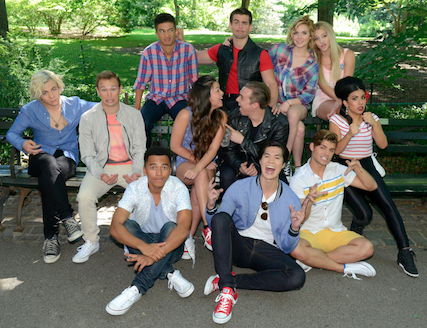 Believe it or not, we're still not over last week's premiere of Teen Beach 2. With so many awesome stars, characters, dances and songs, we're pretty sure it'll be a while before out TB2 fever finally dies down. In the mean time, though, we're happy to keep obsessing—and finding out even more behind-the-scenes info about the flick.

After watching the movie on Disney last week, we couldn't help but wonder what the stars were thinking now that the movie is finally over. So we reached out and asked. We talked to TB2 stars Chrissie Fit, Ross Butler and Kent Boyd to get the inside scoop.

GL: Have there been any great fan reactions to the film?

Chrissie: Someone on Twitter wrote, “And then she goes back to the movie and CHANGES the movie to a female empowered masterpiece. Love. #TeenBeach2.”

GL: What did you guys think of the ending?

Ross: I liked the ending and I wouldn't have changed anything, because it shows that if you follow your dreams and define your own path, everything will work out in the end. Even if you feel things are going off the rails, happiness will find you if you stay true to yourself.

GL: Would you change anything about the film?

Chrissie: I loved the way the movie ended so I wouldn't change a thing!

Kent: I would fast forward another year right before Mack and Brady go to college and see what their relationship status was.

What was your favorite part about TB2? Did you love the ending or do you have your own alternate ending in mind? Tell us in the comments!