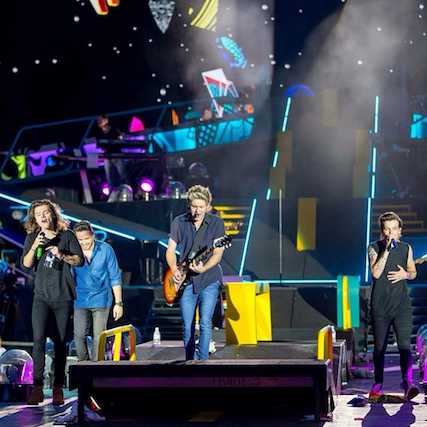 This week was all about the music. Our fave singing celebs were making headlines these past seven days with music videos, new music and fun surprises—plus one memorable fight. Read on to find out what song is going to be on repeat and what new festival you need to get tickets to ASAP.

It’s no secret that One Direction’s new single, "Drag Me Down," is one of their best songs to date. Not only was it their fastest song to go to #1 on the charts, but it is also the first new song since Zayn left the band. While the tune itself was able to break records, Directioners are hoping that the music video will do the same. Released yesterday morning, the official music video for "Drag Me Down" is attempting to break the Vevo record for most amount of views in 24 hours. The title is currently held by Taylor Swift where she earned a whopping 20 million views. With amazing scenery, intense energy and fun moments, the video is a recipe for success.

Nick Jonas's stars has been rising again ever since his song "Jealous" became the go-to track of the school year. Not only is he performing at the MTV Video Music Awards on August 30th, but he will be singing his newest single, "Levels," live for the very first time. Lucky for us, he dropped the new hit early so we’ll definitely be able to sing along to every word. Summer may be coming to an end, but we have a feeling that this is going to be the song that gets everyone hyped for the upcoming year. The song is perfect for everything from getting ready for the back to school dance with your girls to getting pumped before the big field hockey game.

When we first heard the news that Zayn Malik allegedly ended his engagement and relationship with Perrie Edwards from Little Mix by text, we didn’t want to believe it. As Perrie begins to speak out more about her past relationship, it is become more obvious how heartbroken she truly is. Earlier this week, Little Mix had an acoustic performance to celebrate their fourth anniversary of becoming a band and held a livestream so all their fans around the world could celebrate their massive success. While singing "The End," a new song off their upcoming album Get Weird all about the end of a relationships and how the love that was there will never truly die, Perrie broke down in tears. Her Little Mix girls were quick to stop and comfort her while the fans in the audience showed their support. We're glad to see how many people are there for Perrie while she's healing—and we hope she feels better soon.

Glee alum Darren Criss has been making waves on Broadway as he finished an amazing run as Hedwig in the iconic show Hedwig and The Angry Inch. Although he is not currently on stage, it’s not stopping him from making Broadway fans' dreams come true by combining two of his favorite things: music festivals and show tunes. Elsie Fest is a one-of-a-kind outdoor showtune party that not only did Darren create, but he will be performing in as well. Joining him will be Graceland and Les Miserables star Aaron Tveit and Laura Osnes who originated the role of Cinderella in Rodger and Hammerstein's Cinderella on Broadway. The festival is being held on September 27th in New York City and we know it’s going to be something truly magical.

These days, it seems like Zayn Malik just can't stay out of the headlines. After Zayn retweeted a post that compared Miley Cyrus talking about releasing her next album for free and Taylor Swift taking her music off Spotify, a free service, Calvin Harris stepped in to defend his girl Tay—at Zayn's expense. Zayn fired back just as quickly, with the two exchanging some nasty language and insults. Eventually Calvin tweeted, "All good, it was [just about] the quote, not you personally," but with no response from Zayn, it's hard to know how good things actually are—and plenty of other celebs took sides, including Zayn's former bandmate Louis Tomlinson who surprisingly (or not so surprisingly, considering their own past Twitter feud) favorited one of Calvin's angry tweets and none of Zayn's. Sounds like there's still some Bad Blood brewing.