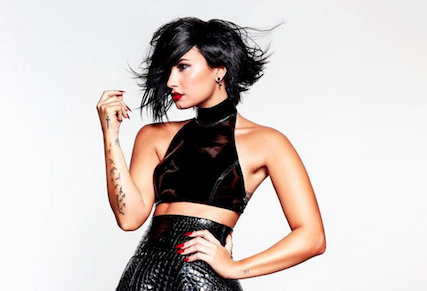 This week's been crazy busy—and not just for One Direction who shared not one, but *four* new songs. Check out what your favorite stars were up to over the past few days and let us know what news you were most excited to hear.

Yeah, 1D put out four songs this week (their Perfect EP debuted Wednesday along with the "Perfect" music video), but there was also Demi Lovato's album Confident which premiered last Friday (complete with a stunning performance of "Stone Cold" on SNL) and 5 Seconds of Summer's album Sounds Good Feels Good which dropped today (are you dying yet? Because we are). On top of all that, rising star Skylar Stecker also just dropped her new music video "Crazy Beautiful" and Justin Bieber shared his music video for "Sorry". The best news of all, though, might just have come from Adele. Not only is her new album 25 on it's way, (November 20th, come sooner) she also debuted her first music video, "Hello." Phew. Still breathing after that? We might've just melted into a puddle on the floor from all the awesomeness.

Pretty Little Liars creator I. Marlene King came forward with some news this week that will drive you crazy with anticipation—when PLL returns in January with their #5yearsforward season, there will be a new character that is even worse than A. We didn’t think that was possible. According to King, what was in previous episodes is “child’s play compared with that is about to happen.” This definitely proves that everyone in Rosewood should always be a suspect. Mark your calendars to tune in to the special preview on Tuesday, Nov. 24 on ABC Family.

Get ready to head back to Luke’s Diner for a cup of joe. Netflix has announced that a Gilmore Girls revival is in the works. The production is planned to start at the beginning of 2016, and has plans for four 90-minute movies, which will take place in present day. To amp up the excitement, a few of the stars even took to Twitter to tease fans about the rumors. Lauren Graham (Lorelai Gilmore) tweeted that while she couldn’t confirm the news, she also couldn’t deny it. Her on-screen boyfriend Luke (played by Scott Patterson) also sent out a tweet, saying, “Did everyone have a good day today??” With a Full House reboot already in the works, here’s hoping we’re in for a trip back to Stars Hollow!

When Modeliste Magazine published their November issue with Zendaya as the cover girl, they weren’t expecting her to fight back. In their fashion photoshoot, the magazine had used photoshopped images that made Zendaya seem skinnier and less curvy than she really was, but when Zendaya saw the retouched pics, she was outraged. She immediately took to Instagram to show off the original images and stand up against ideas of unrealistic beauty. Once they heard what Z had to say, the mag saw her point, and agreed to pull the issue and offending images. Zendaya is proud to be a supporter for self-love and body confidence and we love her for it!