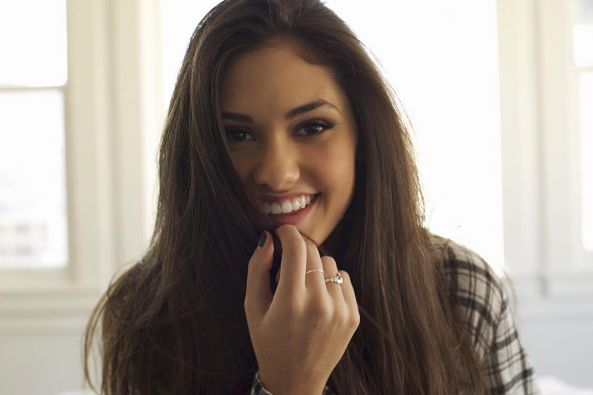 Stuck in the Middle is back! The Disney Channel will be airing the season two premiere of the hit show starting with Stuck in the Waterpark: The Movie tonight at 8 p.m EST. Grab your girls, your favorite ice cream and make sure to tune in this eveing. You *don’t* want to miss out on the Diaz family and their antics!

We had a chance to talk to 17-year-old Ronni Hawk, who plays Rachel, the sassy older sister on Stuck in the Middle. Read on to hear about her own crazy family and what adorbs animal she brought home from vacation with her girls...

GL: Let's start off by talking about your show Stuck in the Middle where you're the big sis. Is your fam as big and as crazy as the Diaz family?

Ronni: Yes, a thousand times yes. I have an older sister (24) and a younger brother (16). It takes us about four hours to get out of the house and we get nowhere.As for food, we never decide. Everyone wants different things and everyone’s on different pages.

GL: What’s the best thing about being a middle child?

Ronni: The best thing is that since my sister is older, I got to watch her make all of her mistakes, so I learned how to maneuver around those (like getting out of trouble with my parents!). I just kept a close eye on what she did.

GL: What’s in store for your character on season two?

Ronni: Rachel has a hair (and clothes) change. I’m finally getting to do my natural hair, which is a lot of curls. It looks cool on camera. She’s matured a lot through the season and I’m really excited for people to see how she looks and how she talks. They put a little bit of Ronni into Rachel and I kind of like it. It’s cool having a part of me in the show.

GL: Besides your curly hair, do you relate to Rachel in other ways?

Ronni: As a person, I really don’t find that I’m like Rachel. She relies on society and social media accepting her and telling her that she’s okay and beautiful and honestly, if I wasn’t in the business, I don’t know if I’d even have an Instagram or anything. I feel like you should look to yourself for your own happiness and acceptance.

GL: Yeah, that makes total sense. Do you find that you get bogged down by social media?

Ronni: Yeah, I feel like social media takes so much time out of people’s lives and they don’t even really recognize it. Most people wake up and go straight to Instagram or Snapchat and see what’s going on. It’s like they’re in a different world instead of their own.

GL: Can you tell us a little bit about the upcoming “Stuck in the Water Park” episode?

Ronni: Yeah! Harley has an invention and we get a free trip to the water park. We’re having a great time and everything, but we got a bill for $800 and we didn’t think we were going to be charged for anything. The parents said if we didn’t pay it back, we would never get to go on vacation again. So it was a whole dilemma figuring out how to get $800 within a day and a half.

GL: That’s crazy. and it sounds like such a fun episode. Is there one thing you’ve done in real life that’s gotten you in huge trouble with your parents?

Ronni: One summer I decided to go to Miami with some of my friends and bring home a stray dog. This guy was selling the dog for like 20 bucks. So I bought the dog, we put it in the car and went home. My dad actually wanted to keep it but my mom was like, “There’s no way on earth we’re keeping this dog right now.”

GL: Do you have a favorite moment from filming season two?

Ronni: I’ve always wanted to go into a giant hamster ball, and I got to do that while filming the show. It was the best experience *ever*.

GL: If you could have anybody guest star on Stuck in the Middle, who would it be and why?

Ronni: Normally, I’d say Selena Gomez, but if it was just anyone out of the ordinary, I *love* Nina Dobrev. I’m a huge fan of hers.

GL: So, you have another project that you’re working on, Benson in the Dark. Can you tell us a little bit about that?

Ronni: I worked on that a long time ago, so now it’s just really post-production. It’s a little short film. I love the indie and short film world, so I decided to do one of those. It’s pretty cool, so just keep an eye out for it.

Tell us about a time *you* were stuck in the middle in the comments below!