These crazy A.D. theories will make your head spin! 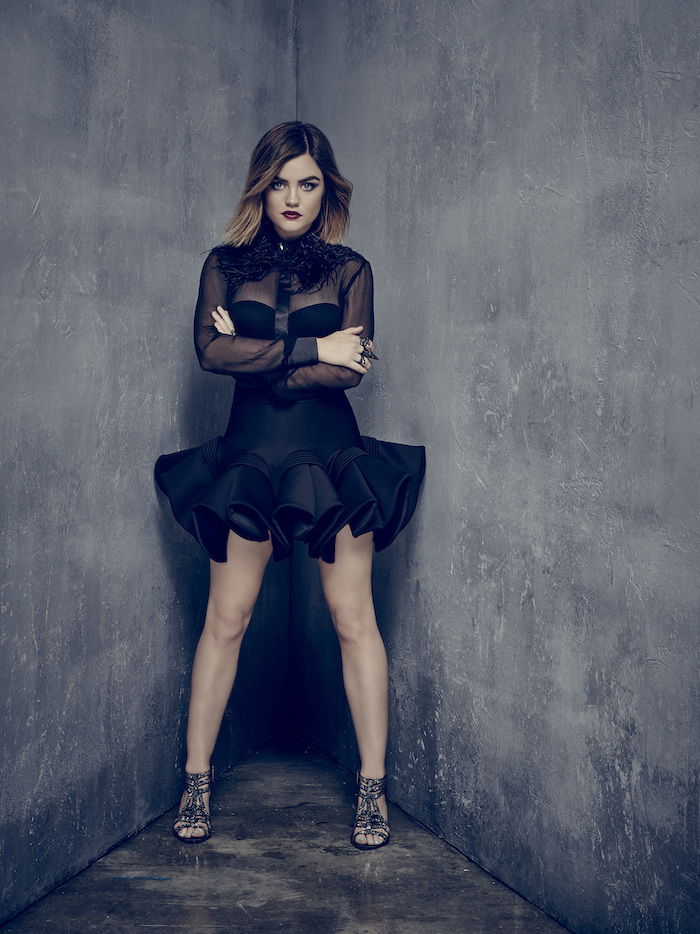 Every time Pretty Little Liars unmasks A, it's never actually over. But on the series finale Tuesday night, it actually will be. A.D. (also known as Uber A) will *finally* be revealed. Even though it's sad that PLL is ending, we are so excited that the mystery will officially be solved!

Some people think they've already got it figured out, though. We found the top ten *insane* A.D. theories for you to weigh in on. (Spoiler alert: Do not read on if you're not caught up!)

*So"* much stuff has happened to Aria, Emily, Spencer, Hanna and Ali throughout the series that would require Uber A to have some amount of medical knowledge. One of the only medical doctors we've gotten to know on the show is Wren. Wren was also caught coloring a girl in a red coat. Not to mention, Wren's just kinda creepy.

Listen, we know Wilden is "dead," but we've lost count of how many characters have returned from the grave. The Wilden theory argues that Wilden is just too suspicious to pass up. How did A.D. get a police uniform? There's been Wilden look-a-likes all over the place. There's a laundry list of reasons to believe this theory that can be found here.

Spencer's big sis has been giving out some weird vibes lately. The Melissa theory points out that she was one of the only people on the show who actually knew Charlotte. The two were even friends. The theory also goes on to say that Melissa found a dead Charoltte, and threw her out of the bell tower because she was afraid of looking guilty. This would also explain the flowers in Charlotte's hands. Now she's just trying to figure out who killed Charlotte.

Many seasons ago, Mona was unmasked as part of the A Team. While she claims she's no longer associated with them, it's still possible that Mona has been A.D. all along! Her goal of getting "in" with the liars has never really worked out. Also, a leaked photo pictures the core five angrily circling a brunette on a couch. And even though we can't be 100 percent sure, it could be a clue that Mona is A.D.

There's *always* been suspicion that Uber A was one of the girls' significant others, like Paige. If you think about it, A.D. had def cut Emily some slack. Remember when Em missed her test and A.D. took it for her? Plus, Paige's return to Rosewood just doesn't make sense. But there's more—Lindsey Shaw's (the actor who plays Paige) IMDbf page briefly listed her as A.D. Of course, the credit mysteriously disappeared, but it could still be true...

This theory suggests that one of the liars (probably Aria) imagined the entire show. She's in a mental hospital and all of the girls represent different sides to her personality. All of the other characters are other Radley patients. None of it was real. Um, whoa.

Way back in season two, Aria's Dad, Byron, mentioned his brother, Scott, had a history of mental illness. There are many variations of this theory, but essentially it suggests that Scott is Aria's biological father and that Scott was in Radley when she was born and couldn't take care of her so Byron and Ella adopted her. Now, Scott is back and playing games with his daughter and her friends. Oh, and A.D. stands for Aria's Dad.

This is another theory with a lot of variations, but Ali could turn out to be A.D. When Ali was pretending to be dead for the first four seasons, she used the initials A.D. when she posted ads in newspapers. She also had an address she had things mailed to "A. D. Incorporated." Not to mention her initials are A.D. Maybe Alison's been hiding in plain sight the whole time.

The secret twin theory, inspired by the book series by Sara Shepard, will never get put to rest. And we can't blame anyone because it's *so* fascinating! This theorizes that Mary Drake actually had twins. We're not too sure if Spencer's twin is someone we already know or a completely new character, but whoever it is has been toying with the girls for fun. Maybe she even appeared in Hanna's dream that featured a bangless Spencer.

Aria has been causing some *serious* problems ever since she joined the A Team this season, but there's a possibility she's been on the A Team since the beginning. A started torturing the girls when Aria returned to Rosewood. She's been credited with being good at lying and in earlier seasons, she was the only girl in the opening credits who did the shushing. Mona even called her "Big A." It's also implied that Aria didn't endure as much pain as her friends in the dollhouse, because there was way less screaming coming from her room. There's a whole website dedicated to the theory.

Who do you think A.D. is? Do you have your own theory or is one of these definitely it? Clue us in in the comments!