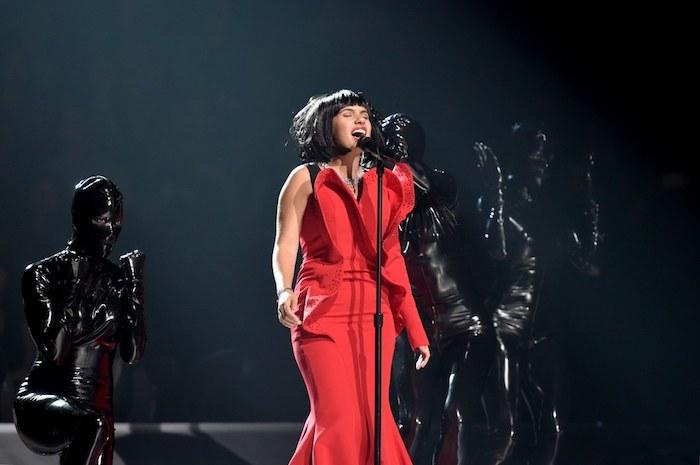 The MTV VMA stage is where some of the most iconic moments in pop culture history have gone down. It's where Britney Spears rocked that yellow snake. Where Kanye interrupted Taylor Swift. And where Nicki Minaj asked, "Miley, what's good?" This year, it was also a place for everyone to just be themselves—and we kind of love that! Some of the leading ladies of pop proved that embracing who you are—despite what others might say about you—is always the best way to go. Take note...

First, there was Taylor. Though she wasn't in attendance, Tay debuted the video for her first reputation single, "Look What You Made Me Do," last night. Peep it below. The song is the most unconventional pop song Taylor has ever released and has garnered mixed reviews, making it the very definition of living your truth. The video is an extension of that.

The vid shows 15 different versions of Taylor, each sparked from a Taylor that the media has conjured up (much like the concept of her "Blank Space" video). Among other themes and references, the video was Taylor calling out the media for making her out to be what she's not, so she's taken back the narrative and is playing up those identities. In this video, she gets the last laugh in her own, very Taylor way.

Next, Alessia Cara, once again, broke down what beauty means to her. The 21-year-old singer-songwriter has made her feelings clear about going makeup-less and rocking a bare face during public appearances. She took that one step further last night during her performance of "Scars To Your Beautiful" when she donned a sleek wig and old-Hollywood style red dress, only to rip them off seconds later to reveal her true self (watch below): wild, curly hair, a black tank, black skinnies and sneakers. She proved that what she looks like has no bearing on her talent or ability to impress an audience. In fact, what's most impressive is just being true to who you are and happy in your own skin, just like the song says.

And, finally, legendary alt-pop queen Pink championed the "be yourself" message during her acceptance speech for her Michael Jackson Video Vanguard award, using a tear-jerking story about her daughter to do drive her point home. Watch the video below.

What was your favorite moment from last night's awards? Sound off below!