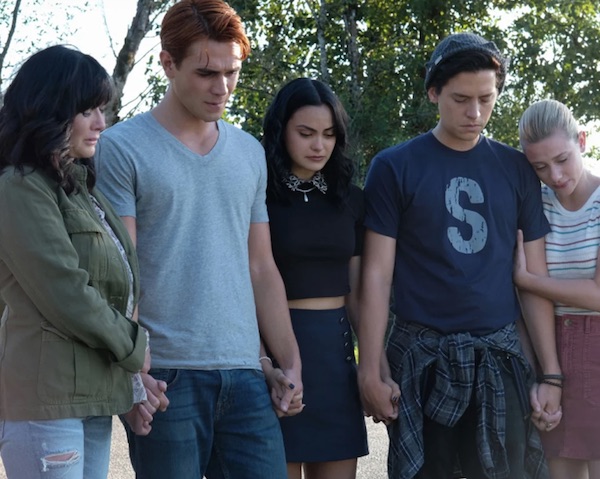 Riverdale returned to The CW with its season 4 premiere and had to deal with an unfortunate reality: Luke Perry, the actor who played Archie's dad, Fred Andrews, passed away suddenly in March, and that plot line had to be written into the show.

The writers and cast did an excellent job at handling the harsh reality while still teaching a lesson. In the episode, "In Memoriam," Archie (played by KJ Apa) gets the phone call he never expected when his mom rings to let him know that his father was hit by a car and passed away. Archie is angry and vengeful, but after meeting a woman at his father's crash site, he finds out that his dad actually died a hero. You see, the woman was having car trouble, and Archie's dad pulled over to help her. When another car swerved toward them on the side of the road, Fred jumped in front, risking his life to protect a perfect stranger.

Related: Which character from Riverdale are you?

“This was not an episode any of us wanted to make but everyone poured their heart and soul into it,” showrunner Roberto Aguirre-Sacasa told the Daily News. “We’re very proud of it. It’s very cathartic.”

The episode contained a bunch of nods to Luke Perry. The woman on the side of the road was played by Shannen Doherty, Luke's longtime friend and former co-star (the two played Dylan and Brenda on Beverly Hills, 90210). Also, in all the scenes where Archie and his friends and family are praising Fred's qualities, viewers get a hunch that they're really talking about Luke Perry's. Lastly, the episode ends with the words, "In Loving Memory: Luke Perry, 1966-2019."

Archie’s line about going to Sears with Fred always really hit me. Reminded me of when I would go with my dad to Home Depot as a kid. And how special even those silly things can be❤️ #Riverdale

Tonight’s episode, and all episodes for the rest of our run, are for Luke. We love, honor, and cherish his memory every single day. I only wish he were here to see how many lives he touched with happiness and laughter. I know he’s watching from above. We love you, Luke.

And my all time favorite picture of him. Taken by @colesprouse.

What did you think of the Riverdale season premiere?