By now, we're guessing you've watched (or are planning to watch) the Paramount+ iCarly reboot that came out on June 17. It met (and exceeded) *all* of our expectations. Carly and Freddie are back and better than ever vlogging with the OG backdrop. We've already had some OG iCarly character appearances, like Nora Dershlit and Mrs. Benson. It almost feels like nothing has changed since the dramatic last episode in 2012. But the original cast has two new starring characters alongside them (Laci Mosley and Jaidyn Triplett as Harper, Carly's roommate and BFF, and Millicent, Freddie's stepdaughter). They're also older, more mature and sadly, without Sam.

We're going to break down some of our fave moments and details from the first reboot episodes—"iStart Over," "iHate Carly" and "iFauxpologize"!!

First off, from the second Millicent—Freddie's adoptive stepdaughter from a previous marriage—showed up on our screens, we knew she reminded us of someone. Her sarcasm, snarky remarks, tech-savviness and sometimes manipulative actions remind us of none other than Samantha Puckett (and maybe even Megan from Drake & Josh). We know no one can replace the ham eating, butter sock swinging, hilarious girl, but Millicent helps remind us and fill her shoes! She's even warmed up to Mrs. Benson, aka Grandma B.

Aw the explanation for Sam, God I miss her. Not what I was expecting but that's pretty on brand for her. She's happy tho! #iCarly pic.twitter.com/On0mWEfjRc

While there is almost nothing more iconic than Spencer Shay's old apartment, we are *living* for the renovations. It helps to show how he's grown up and matured past his younger self, just like the audience watching.

Don't worry, his sense of humor is the same, and his art is just as weird... in a good way. There are still hints of some young Spencer-inspired decor, like his sculpture Bottle Bot and some giant gummy bear figures scattered throughout the living room. Thankfully, one thing that hasn't changed is the upstairs room where Freddie and Carly shoot their show. 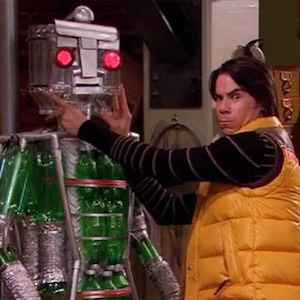 We are kind of obsessing over the outfits too. Carly, her new bestie/roommate Harper, played by Laci Mosley, and Millicent, played by Jaidyn Triplett, are serving look after look. Carly's style has evolved into what we're coining "dark academia meets edgy cottage core." She rocks a satin dress, lots of cardigans and the cutest black booties.

Harper wants to be a stylist, and for a good reason. Her style is unmatched. We see her in matching sets, adorable puffy sleeve tops, tulle and the cutest dresses. Millicent's outfits are colorful, cool and cute. Our fave piece is her yellow bomber jacket with butterflies on the front. These three characters will *definitely* be inspiring some looks down the line.

Although their fashion senses are incredible, we also love these three ladies for another reason: Their confidence in themselves is inspiring. The relationship between Carly and Harper is fantastic. While she's not there to replace Sam's bestie status, it's good to see that Carly has found a BFF she loves.

laci mosley as harper in the icarly revival is the biggest serve of the century #iCarly pic.twitter.com/lolCTgaBBJ

It's clear that this revival was made with those who loved the original iCarly in mind. "We wanted to make the show a little more mature this time around and not for kids—not just for kids—because we really made it with all of the OG fans in mind," said Miranda Cosgrove in a statement. The show deals with some more mature content and refers to the OG show that any iCarly fan will recognize. Even if you don't know the OG, the new version is still ah-mazing and hilarious!

We are also *obsessed* with Freddie and Spencer's friendship! In true Spencer fashion, he temporarily blinds himself not once but twice in one episode. Although Freddie clearly doesn't enjoy helping him out, he doesn't fight back and agrees. Their jokes with each other help make the reboot so perfect and funny. It's so cute to see that their friendship grew so much stronger over the years.

We can't be the only ones who almost thought of Spencer as practically a fourth member of the iconic trio, and we're glad to see that that never changed.

For anyone who grew up with iCarly (or has at least watched it in past years), the reboot *perfectly* illustrates how we've all gotten older and more mature. But the references, overall humor and ~vibe~ of the show give us the subtle sense of familiarity that makes this reboot so perfect. We cannot wait for June 24th when episode four comes out on Paramount+! It is expected for episodes to come out weekly until August 26th, when the season one finale will air.

Tag us on Twitter @girlslifemag to tell us your fave parts and reactions to the reboot!

POSTED IN TRENDING, Must List, iCarly, television, watch this