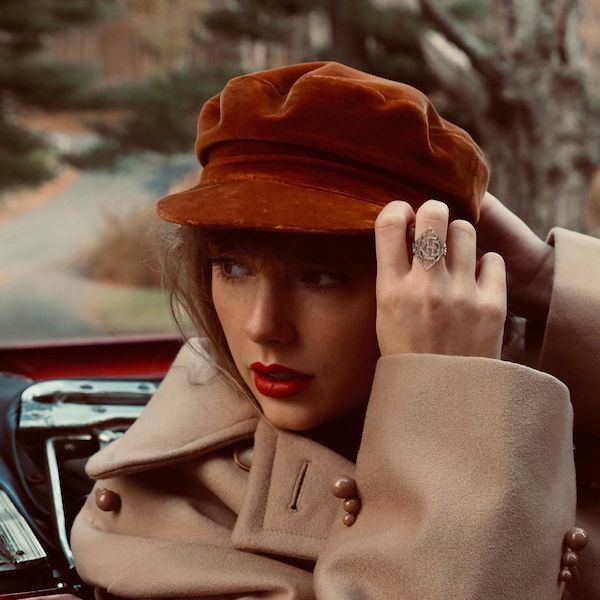 Taylor Swift is *officially* the gift that keeps on giving. From two surprise album releases in one year to a whole re-recording era with new Vault songs, all we can say is that now is a really good time to be a Swiftie. She announced her next re-recorded album Red (Taylor's Version) on June 18, and since Taylor is famous for planting Easter eggs about her upcoming releases, Swifties got right to work searching for clues that might tell us more about this re-recording. Of all the crazy theories these sleuthing Swifties have brought up on social media, these six theories are the main ones to look out for.

Olivia Rodrigo may be on a Vault song

You read that right—some theories speculate that we may be getting the collab of our *dreams.* On the album cover for Red (Taylor's Version), Taylor is wearing a diamond-shaped ring with letters spelling out "Red." This ring is similar to a "Love" ring that Taylor wore during the original Red era, and she even gifted Olivia that same ring.

Plus, Red is a classic breakup album. Taylor said so herself in her announcement: "Red resembled a heartbroken person. It was all over the place, a fractured mosaic of feelings that somehow all fit together in the end." Olivia's album is *so* the same vibe. The first words you hear on Sour are "I want it to be, like, messy," so it makes sense that if Olivia was going to be on any of the re-recorded albums, it would be Red (Taylor's Version).

Niall Horan might also be on a Vault song 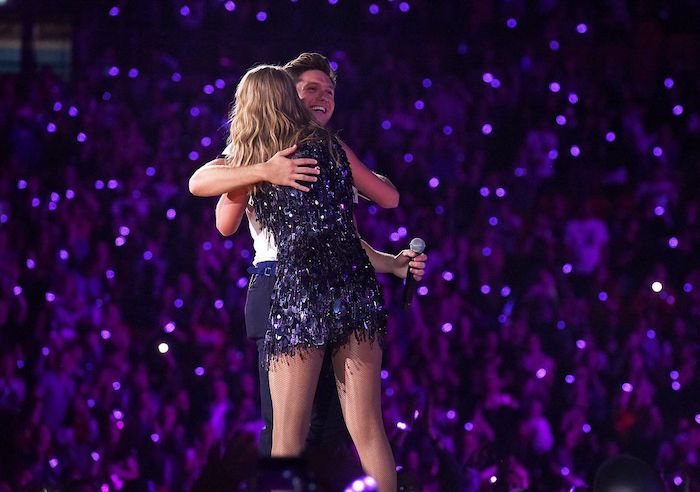 Speaking of collabs, we might (finally!) get a Niall Horan x T-Swift song from the Vault. It's no secret that Niall Horan is a *huge* Swiftie. He sang "Lover" on his Instagram live, performed with Taylor in London during her Reputation tour and has repeatedly mentioned Taylor on his social media. Not only is Red the album that best fits Niall's soft pop vibe, but it's also home to his fave Taylor Swift song, "All Too Well."

📲 IG | Niall Horan reveals once again via Instagram that he’d love to collab with Taylor Swift and that his favorite song of hers is ‘All Too Well’ pic.twitter.com/dyRAMqERPb

Taylor has already said that she's doing collabs with her fave artists for some of her Vault songs, and because Taylor and Niall are good friends, there's a possibility that he falls into that "fave artist" category.

Fans also think Niall's latest release, "Our Song" featuring Anne-Marie, could be a nod to an upcoming Taylor collab since she also has a song called "Our Song" from *way* back in 2007. This might feel like a stretch, but, hey, anything can be a clue when it comes to Taylor Swift.

An extended, 10-minute version of "All Too Well"

You might have already heard about this one, and it's probably the theory that will most likely be proven right when the album comes out. Taylor revealed in a Rolling Stone podcast last November that there was originally a 10-minute version of "All Too Well" that had to be cut in half for the album. People have also heard the co-writer for the song, Liz Rose, say that this 10-minute song actually used to be a whole 24 minutes long.

So what makes us think we're getting the extended version of "All Too Well?" The first clue we got was in the initial Instagram announcement about Red (Taylor's Version). The second to last sentence in her announcement was, "And hey, one of them is even ten minutes long." The only 10-minute song Swifties know of so far is "All Too Well," and it's hard to imagine that there's another 10-minute song somewhere in the Vault.

The next album that I’ll be releasing is my version of Red, which will be out on November 19. This will be the first time you hear all 30 songs that were meant to go on Red. And hey, one of them is even ten minutes long🧣 https://t.co/FOBLS5aHpS pic.twitter.com/6zWa64Owgp

Another clue Taylor gave us was in her Twitter announcement. She followed the "one of them is even ten minutes long" with a red scarf emoji. In "All Too Well," Taylor sings, "And I left my scarf there at your sister's house," so most Swifties are thoroughly convinced that the 10-minute song will be the extended version of "All Too Well." If that's the case, Jake Gyllenhaal is *so* not ready for this release.

Fans initially believed that 1989 was going to be the next re-recorded album after Fearless (Taylor's Version). There was new merch labeled "Est. 1989," and the mood board Taylor made for her interview with Stephen Colbert had 1989 references *all* over it (8 hearts and 9 stars, a seagull and references to New York). So fans were shocked when she made the Red (Taylor's Version) announcement.

ummm…blondie is truly unhinged.
the announcement and release dates just line up that well?

But if you line up the announcement and release dates of the two re-recordings we know of so far, the last digits read "1989." Coincidence? Some Swifties don't think so. There were *so* many clues about 1989 that are hard to ignore. Also, the @taylornation Instagram account still hasn't changed its profile picture even though Tay has, so has the Red era even officially started? Some fans think this means Taylor is gearing up for a summer release of 1989 (Taylor's Version) since it's the perf summer album.

However, Taylor was pretty clear in her announcement that the "next album" she'll release is her version of Red. But Swifties can dream, right?

"The Man" music video has a re-recording calendar

This theory sounds *totally* crazy at first, but it makes sense when you look at it long enough. There's a scene in the music video for "The Man" that may actually be a calendar that tells us when each of the re-recorded albums will come out.

Let’s start with what we know: Fearless was announced in February (2), with the release of Love Story TV. The album dropped in April, and the “era” lasted through May (5). Similarly, Fearless is written starting in square 2 (going down to match the months) &ending in square 5💛💛 pic.twitter.com/Jor2Xg9DeW

If you divide the scene into thirds, with the right-most third representing 2021, we can create a grid-like calendar. According to this calendar, Red actually does come after Fearless, with Speak Now following closely after. If this theory is true, we may get a 2021 winter release of Speak Now (squee!), but that puts the release of 1989 in 2023 (sigh).

A second Ed Sheeran collab from the Vault

"Everything Has Changed" was a song that defined music in 2012. Well, it turns out that it was just one of two songs that Ed and Taylor wrote together at the time! He told Rolling Stone that they "wrote two tunes, actually, one on the record and another that's still out in the ether somewhere." There were over 30 songs written for Red, and with 30 tracks on the upcoming release, there's a good chance that the second Ed and Taylor collab will be on there—not to mention that Ed recently noted that "Taylor's got a few surprises in store for you."

What's your fave song from Red? Let us know on Twitter @girlslifemag!