Have a (Scary) Sleepover Party! 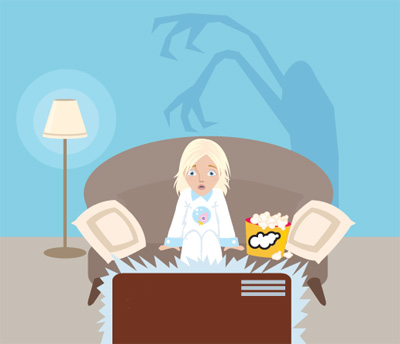 The season of fright is upon us! And what better way to celebrate then with some of your best pals and the scariest movies known to man? We’ve got a list of the best films to watch with the lights off (if you dare!) and some spooky party ideas. So hit up your local Blockbuster ASAP and prepare a night of scares to go along with these classic horror flicks. (Editor’s note: These movies are actually terrifying, so those faint of heart, beware!)


The Others
On the secluded Isle of Jersey, Grace (Nicole Kidman) awaits the return of her husband from war with her two young children in a beautiful, Victorian mansion. But when three new servants arrive, startling supernatural events begin to unfold, and Grace is forced to forsake her fearful nature to uncover who the trespassers are in her home and what they want from her.  The Others is a tale of psychological horror that will have you at the edge of your seat—or under it!

What Lies Beneath
Claire (Michelle Pfeiffer) and her husband Norman (Harrison Ford) seem like the perfect couple. But after the mysterious disappearance of her neighbor and some strange occurrences in the house, Claire is pretty sure that she’s being haunted. When she begins to investigate, the mystery only deepens until Claire discovers a ghastly secret in Norman’s past. Complete with gripping action and puzzling twists, this movie is sure to keep you entertained. So how does end? Watch and learn!

Arachnophobia
Scared of spiders? Then this flick probably isn’t for you! When a rare species of spider from Venezuela is found in a small California town, residents are dying left and right. It’s up to Dr. Jennings (Jeff Daniels) to make sense of these sudden deaths, and just who—or what—is behind them. Can he stop this massive eruption of deadly spiders before the entire town is killed? It’s a race against time (and nature) in this frightening movie that puts humanity at the mercy of some gross bugs!

The Sixth Sense
Dr. Malcolm Crowe (Bruce Willis) is an award winning child psychologist. But his most recent patient, Cole Sear (Haley Joel Osment), has a problem that Crowe cannot solve: he can see dead people. In constant terror, Cole confides only in Dr. Crowe for help, understanding and resolution. But in the true fashion of director M. Night Shyamalan, there is an unexpected, terrifying twist that awaits viewers at the end of the movie—if you can make it that far!

The Ring
In this creepy horror story, Aussie actress Naomi Watts plays Rachel, a journalist investigating the death of her niece. When she watches the cursed videotape found at the scene of the death, she receives a phone call condemning her to die in seven days. Bloody noses, nightmares and some seriously disturbing events follow. Who’s behind the mystery? It’s up to Rachel to find out before her seven days are over. And heads up, you might not sleep for a while after watching this one!

Psycho
Famed director Alfred Hitchcock defined the classic horror movie with this 1960 story about an ordinary woman, Marion Crane (Janet Leigh) who has a horrific run-in with a deranged man. The movie follows Marion’s fiancée and sister as they attempt to piece together the mystery, ultimately leading them to the basement of the killer…or killers? You’ll definitely lose a little sleep trying to understand this psychological thriller.

Other Frightening Favorites Include:
Prom Night
Watcher in the Woods
House on Haunted Hill

Extra Fun For Movie Night! Here’s How To Make Your Spooky Sleepover Even Better:

1. Decorate your viewing room.  Hang cobwebs and set up a dim lighting system. Try using white Christmas lights or pumpkin lights and string them from the ceiling to make an eerie glow. You could even stick some glow-in-the-dark stars on the ceiling and walls to make it seem like you are outside amidst a spooky midnight wood.

2. Whip up special snacks. Hop online and look up some killer recipes like popcorn balls or dirt cups.  You can make some chocolate cupcakes and stick 8 little pretzels rods on the sides to make it a creepy, crawly spider. Put your creative juices to work in the kitchen!

3. Get glammed up. Whether you are the princess type or the warted witch, dressing up is a great way to relax before watching a movie that just might make stand your hair on end.  Not to mention, costumes always create some fun and fabulous photo opps.

4. Perform a scary makeover. Break out that black nail polish, thick eye-liner and other crazy makeup that you’ve never tried. Most makeup kits have at least one type of super dark eye shadow, so don’t stick with the regular everyday look. This is your chance to experiment—make each other look hideous!

5. Dust off your old Ouiji board and light some candles.  Even if you’re just trying to figure out if your crush really does know you exist, the Ouija adds some spooky essence to a dark and stormy evening.