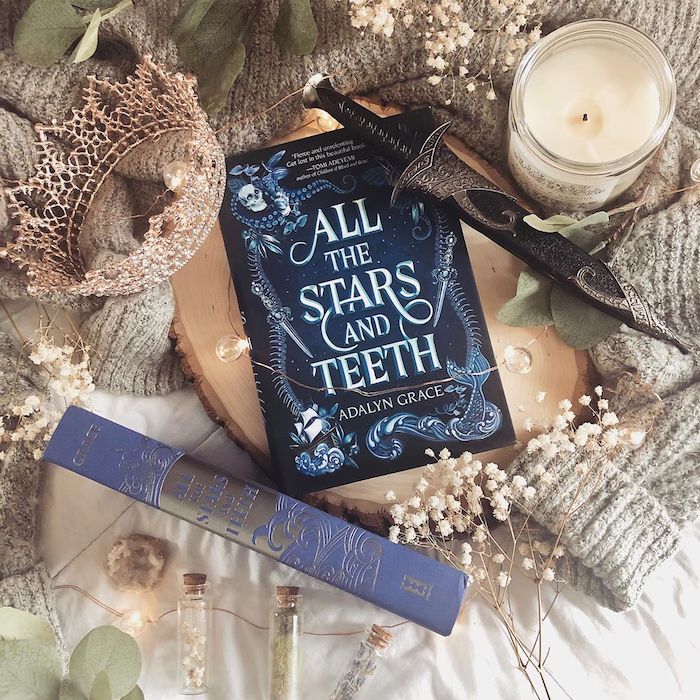 If you're new here, hello and welcome, book lovers! Here's how this works: Each month we read, discuss and obsess over a new book; so if you haven’t signed up already, be sure to click this link and officially join the club. We’ll email you with Chloe’s Book Club updates, reading guides, special contests and giveaways, event invitations and more. 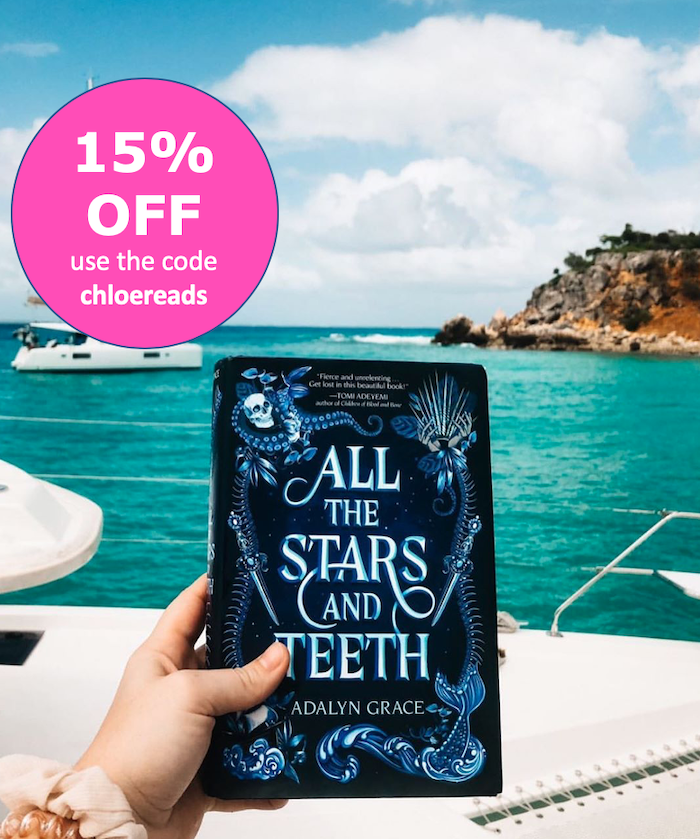 If you love fantasy, mermaids and flawed-yet-fierce female leads, you'll devour Chloe's Book Club pick for March, All the Stars and Teeth. It's got everything from romance to murder. Add in all different kinds of magic and abracadabra...and sign us right up! To get 15% off your copy, head over to Barnes & Noble and use the code chloereads at checkout (offer available through March 31, 2020). Psst: Be sure to share the discount with all the friends in your book club!

Amora Montara, the princess of Visidia, wields powerful soul magic—and she's about to show it off in hopes of becoming the kingdom's High Animancer on her 18th birthday. She's been training under her father her whole life to take on the role of being able to kill (but only when warranted—like executing a prisoner who has been sentenced to death). It's a powerful magic that no one but the monarchy is allowed to practice.

Of course, in a gruesome, bloody and awesome nail-biter of a scene, everything goes horribly wrong for the princess. As Amora uses the required blood and teeth to end the prisoner's life, she accidentally tortures him mercilessly in front of everyone. Oooooops.

Amora's not the most likable heroine after this scene. Soon, she gets sent to prison and her well-meaning but unloved fiancé, Ferrick (a healer) brings her food and company. Then a dark, mysterious pirate named Bastian arrives, and he breaks her free.

If she stays in prison, she could be executed for her mistake. If she goes with Bastian, she might be able to prove herself capable of becoming the rightful High Animancer (instead of her wacky Aunt Kalea, the only other heir with the same powers). But she'll pay a price—she has to help Bastian reclaim his stolen magic. And she doesn't know if she can trust him. Ferrick definitely doesn't trust him.

The sparks between Bastian and Amora are flying from the start, much to her fiancé Ferrick's chagrin. That's what's not so likable about Amora at first (and, well, she just tortured someone to death).

But as the three of them set sail on Bastian's magical ship called Keel Haul, we get to know Amora better. She's funny, clever and resolved. She's not afraid to talk about her period or anything else with anyone. And she swears she only wants to do right by her kingdom and be the best (and most fair) ruler.

Amora grows on you. You start to like her, root for her and really love her as the story progresses at a quick speed. While Amora can use blood and bone to kill (she also carries a dagger), it doesn't take her long to come around to being kinder to Ferrick (and Ferrick seems to accept that she prefers the darkly handsome pirate Bastian).

Each island in the kingdom is only allowed to practice one type of magic. There's Amora's rare and royal soul magic, but other areas practice enchantment magic (think turning hair pink and eyes purple for fun), elemental magic (controlling earth, fire, water or air), time magic (slowing it down or speeding it up) and restoration magic (healing others).

Of course, there's also a banished island called Zudoh that practices curse magic (barriers and charms on people). That's where the rebels live, especially the most dangerous one named Kaven. Bring on the magic!

Amora, Bastian and Ferrick set sail on their wild sea adventure to save Amora's life, restore her reputation and end Bastian's curse so he can resume practicing his magic. They must travel to Zudoh where people are starving—and where we find out that Amora's father, the king, has not been so kind and fair to them. Kaven, a leader on that island, is plotting to destroy the entire kingdom. He's had enough of just being able to practice one kind of magic—and he's also enraged with how the king has ruled.

Amora, Bastian and Ferrick need to reach Zudoh to stop Kaven, but the island is cursed, so they can't get to it. A group of dangerous enchantment magic barracudas give our fierce trio some trouble (then some tips for getting there). They need a mermaid. Mermaids are hard to find, and they have powerful song magic. They can control tides, summon creatures from the sea and seduce anyone susceptible to a woman's charm (and drown them!). Only a mermaid can sense Zudoh's curse and break it.

A fight ensues to find the mermaid, and Amora almost kills a man named Barth. But she lets him live in exchange for an imprisoned, feisty mermaid named Vataea. Vataea tells them, "If you touch me again, I will tear the hands from your body and rip your throat out with only my teeth." She might be the best character in the whole book—and she's exactly what they need. They rescue Vataea and convince her to help them out.

The group makes it to Zudoh, where Amora finds out that Kaven is Bastian's brother—and the one who put the curse on him. They find out Amora's dad has been unfair to the people. Lots of bloody battles ensue as secrets are revealed.

"Everything I grew up believing—about my blood, my magic, my lineage—none of it was real. This isn't the way it's meant to be," Amora thinks. Her father has been hoarding all the magic. In a bloody battle, her father kills himself and Amora kills Kaven. Though she saves the kingdom, Kaven leaves her with a curse that takes away all her magical powers and ties them to Bastian.

Even though Amora is restored as the ruler, no one knows the truth. She must break her curse. But first, she must restore order and rule. (Drumroll...the next book in the series is being written!) 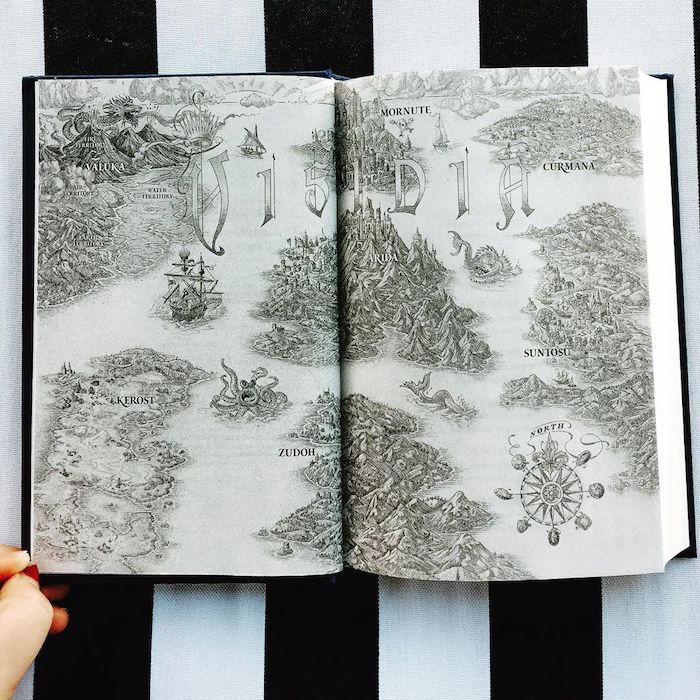 If there is one genre I love, it's fantasy. And this book definitely delivers. Who doesn't want to spend hours and hours delving into a well-developed world with magic, a mermaid, sea monsters, killer bones and blood, a princess and a few cute boys? It's a pretty awesome and creative universe. I was so sad when the book ended, but really happy to know there will be a sequel.

Amora Montara makes mistakes in the beginning, but who doesn't? I think that's what makes her even more relatable. She misuses her powers—and I think we can all relate to hurting people, even though we don't mean to. Obviously, what she did was awful, but she suffers from her actions and shows a lot of remorse.

Then she comes clean with Ferrick and tells him that it's never going to happen between them. I love a girl with a lot of guts. Amora knows what she wants—and she wants to be the best ruler her kingdom has ever seen. Not only does she want to protect her people, but she also fiercely protects her friends, fighting for them even when she risks death. She has magic, and she's not afraid to use it. She's a champion of women, too. You can tell by the way she respects and reveres Vataea the mermaid.

I thought this book was awesome from start to finish. I loved it the way I loved the Red Queen series. The characters—Bastian, Vataea, Ferrick, the king and Amora are all so well-developed. They start out sort of clueless and not knowing where they're going or what's happening. But they all learn from their behaviors and grow and change in the end. Isn't that the best way to feel about your favorite fictional people—and real people, too?

It's always OK to make mistakes. But to learn from them and make yourself a better person is the goal. Amora hits that goal and so much more. This was a book I just got lost in. It's adventure, magic, romance, friendship, fighting *and* a cliffhanger ending. This book is everything!

You need a little mystical and powerful magic to go along with a fierce book like All the Stars and Teeth. I picked a list of songs as eclectic, unique and exciting as this novel. These tracks will get you in the mood to read about and root for Amora and her friends on the coolest ship ever, the Keel Haul (Wouldn't that make a great name for a song?).

1. On her 18th birthday, Amora is pretty sure of herself. On page 14, she thinks, "If there's one thing I know for certain about this night it's that I am meant to wear this crown" (The crown is made of dangerous bone spikes and spirals). Did you like Amora at this point? Why did you think she would or wouldn't take the crown then—or ever?

2. Amora's family has kept secrets from her that she is determined from the beginning to find out (page 21). Have your family or friends ever kept secrets from you? What were those secrets and how did you find out? How did you feel discovering that someone hid something from you? Amora probably felt the same way!

3. Ferrick severs his hand for Amora to do magic on page 97. "I try not to think about how much trust Ferrick has in me to let me keep this severed hand." What do you think that says about Ferrick's character? How far would you go to show loyalty to someone you love and respect?

5. On page 348, Amora is on the floor wondering to what Kaven has cursed her magic. Did you figure it out? What did you think when you found out she was cursed to Bastian? How did you feel about Amora losing her powers? How would you feel if you lost one of your favorite strengths? Do you think she will get her powers back?

So you've read the book and you're ready to talk all things All the Stars and Teeth? Wondering *exactly* how Chloe’s Book Club works and what it means to be a member? There are so many ways you can get involved—whether it’s solo, on social media or with your whole squad. Here's a quick list…
+ SOLO. Take your personal reading game to the next level by using Chloe's discussion questions as a guide for your own journaling and personal reflection. If you love to read, it could be fun to start a special book diary where you keep track of all your favorite novels—and the personal musings they inspired.
+ ON SOCIAL MEDIA. Share your thoughts on All the Stars and Teeth using the hashtag #chloesbookclub on Twitter and Instagram. (Just remember: You have to have a public account for us to be able to see and respond to your posts!)
+ WITH YOUR SQUAD. Host an IRL book club party, of course! Check out the playlist for music ideas and Chloe's discussion questions for convo starters — then be sure to tag us in your snaps so we can share them.

How much homework do you have today?

It's our Spectacular Spring Reads Giveaway!


Want to score all the best books this spring? We've got your dream TBR pile—enter to win them all HERE.

Quench skin with oil-free hydration that won't break you out. $6
CLICK HERE TO ENTER