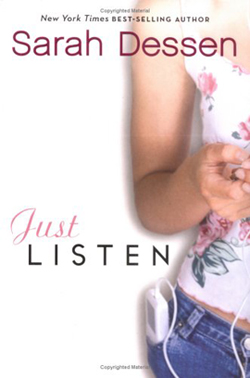 Hey everyone! Remember me!? I’m Lauren! I did the first discussion on Twilight and the one on Generation Dead. And I am so psyched to talk with you guys about the book Just Listen, by Sarah Dessen. It was so good I finished it in one sitting, no lie. Anyway, to get us started let’s check out a quick review of the book. Warning: There are spoilers ahead!

Review: Getting through high school is hard. Being the youngest of three sisters is hard. Losing your best friend is hard. But the hardest thing for Annabel is learning to be honest with herself. Annabelle had it all: a modeling career, a cool best friend, a supportive family and her spot in the popular crowd. At least she did before last summer, before everything went horribly wrong. Now, after hiding in her room all summer, Annabel returns to school to find that her ex-best friend is still mad, her family is falling apart, and her modeling career isn’t what it used to be. But then one day, sitting by the outcast wall, she finds Owen, a boy with an angry reputation, a deep love for music, and the pesky ability to make her speak her mind. With his help, will Annabelle overcome her fear for confrontation? Will she reveal the secret that has been haunting her all summer? Will she finally be free?

1) Did Annabel annoy you? There are shades of gray to this question. Feel free to add middle opinions.

2) Do you think the family drama was overdone or realistic?

GL Lauren: Never once while reading this book was I like, “That would never happen.” With Whitney’s eating disorder, every step of her struggle was believable. I have actually done research on this topic, and people going through these disorders really claim that there is nothing wrong with their habits. They also will sit at the dinner table and cut their food into tiny bits, like Whitney did, trying to make it look they ate some. I also loved the way Kirsten grew up through the book. Even though she lived in New York away from the family, we were still updated on her progress. As for the mom’s behavior and depression, I know from personal experience that stuff like that does go down. I thought Sarah Dessen did an amazing job weaving these personal life stories together to create an overall family plot.

GL Lauren: Personally, I love Owen’s honesty policy. He doesn’t force you to be honest, he invited you to be. And because he isn’t forcing it upon you, you feel free to be honest in return. He creates an open, non-judgmental feel and Annabel responds to that.

GL Lauren: This type of this is a double-edged sword. Honesty is good when it comes to certain things. But then honesty can also offend a person as well. The question is: Was it worth offending the person to get the message across? For example, if someone had just told those people on American Idol that they can’t sing, their embarrassment suffered on national TV would not have come to pass. Whoever told them this though, would have seriously offended them. So, was it worth it?

5) Which sister would you consider yourself the most like? Kirsten, Whitney or Annabel?

GL Lauren: I actually find myself being a mixture of all three. Relation to Kirsten—I am a journalism major with a minor in film. I am also the older sibling in my family. Relation to Whitney—I went through a similar issue, only instead of an eating disorder, I had severe depression. Through writing, much like Whitney, I was able to re-center and re-create myself. Relation to Annabel—I am a fan of music and will listen to anything once. My honesty tendencies are much like hers. I don’t like making people unhappy, so little white lies are usually my custom. If someone wants to know how I really feel, they normally have to pry it out of me.


Next week we are discussing Stargirl by Jerry Spinelli! Get excited and get reading! It’s an awesome book!