Book Club: Airhead, by Meg Cabot (plus a giveaway!) 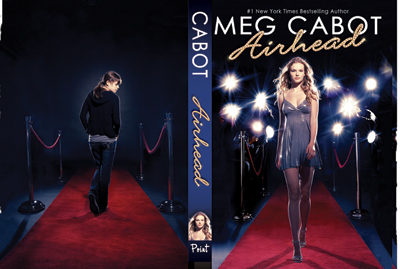 We’re talking Airhead, by Meg Cabot, this week. Not only are we chatting about the book, but we’re giving away cool swag, too! (Books, t-shirts, a $100 gift card to MAC cosmetics, oh my! Get the deets below.) But first, onto the book…

Imagine one day you are an awkward, anxious teenager (OK, so perhaps there is no imagination necessary) and then you wake up as a world famous supermodel.  Same person, different body.  So is it your dream come true, or an absolute nightmare?

That’s exactly what Emerson Watts encounters when she wakes from a coma, and she is less than thrilled.  After a controversial procedure that saves Emerson’s life, she takes the body of another teen girl, who happened to be a top model.

That’s the problem, she’s not the same and she is the same—all at the same time!  Due to the controversy of her life saving procedure, Emerson Watts is still Emerson Watts but she now must live the life of Nikki Howard as if Emerson Watts is nonexistent.  (Reread that line again if you need to.)  Talk about an identity crisis.

Ok, girly girls, before we get chatting, let me just inform you that there will be more in this series of our heroine Nikki—no Emerson—no Nikki—Emernikki—Nikemerson.   Let me tell you, I am already anticipating the next one.  Ms. Cabot, please hurry!

GL Emily:  Well, if I could wake up and discover I was a filthy rich supermodel, I don’t think I would complain.  I know there are downs, but my family would know, like Emerson’s, and I would still know who I was, so it’s a matter of blending the two over time.  I feel it would be pretty amazing to have closets full of clothes and shoes, so this is blinding my rational side.  On the other hand, I might have to leave my boyfriend and my other friends, like Emerson, and that is almost unbearable.  But the closet is full!  Conundrum!

What was the most amusing part of the book to you?

I loved the kidnapping by Brandon and Lulu.  That was pretty amusing.  But I also liked when Nikki took off on the scooter with her singer ‘beau’ Gabriel.  He seems dreamy…

Emerson didn’t embrace her new life with enthusiasm, but she understood she had to fulfill the duties of Nikki.  Do you think it would be challenging to model and give up all your privacy because of your celebrity?

Emerson walked into the modeling thinking she knew it all. Everyone assumed she had amnesia and didn’t remember, but clearly there were challenges she didn’t understand.  She majorly faltered on her job, and I thought it was eye-opening to the reader to have a better look inside the world of modeling.  But still, to be photographed for a living, still seems pretty glamorous.

Do you think now that she is more Nikki she should still go after Christopher, or should she aim higher in the social scene?

I understand she’s in love with the boy, but I would be lured away by the yummy eye candy.  She is only fifteen and now her entire world is different.  And Christopher is different.  But I couldn’t help but be intrigued by the singers like Gabriel and actors like Justin.

Will you read the next in the series?

Oh, and one more thing! Next week? We’re talking Forever in Blue: The Fourth Summer of the Sisterhood. See you then!