Forever in Blue: The Fourth Summer of the Sisterhood 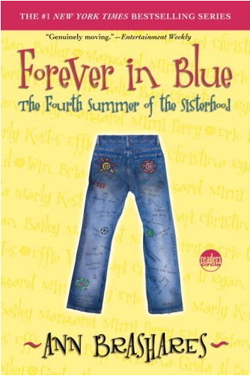 Join GL for a discussion of Forever in Blue: The Fourth Summer of the Sisterhood, by Ann Brashares. Perhaps you know of the Sisterhood of the Traveling Pants because of the movies or because you read a few of the books before.

Let’s recap the final journey Bee, Carmen, Lena, and Tibby took with their beloved pants alongside them. SPOILER ALERT if you haven’t read the fourth book or seen Sisterhood of the Traveling Pants 2!

1. Carmen left to go to Williams for college and was having a hard time finding her niche.  Her usual brazen, outgoing self receded as she gained the freshmen 15 and found that making new friends was not her forte.  In her second semester she met Julia, a well-known collegiate girl who reached out and became friends with Carmen.  Through Julia, Carmen became involved in the theater as a set designer.  Convinced to join a summer program with her knew friend, Carmen uncovered a secret talent for acting, and as she rises to the stage, her ‘friend’ tries to make her fall.

2. Bee, after learning her boyfriend was going to work at the summer camp where they had met in Baja, takes off for Turkey on an archeological dig.  Uncovering the bones and pottery of time gone by, Bee also uncovers some uncomfortable feelings about her relationship with her beau, Eric.  A handsome (married) professor enchants her in more ways than education, and the summer turns out to be one with the promise of love, lust and betrayal.

3. Lena is enrolls in summer art classes at her elite art school in Providence.  Still trying to forget Kostos, the love of her life, Lena tries to work harder on her art.  In the process she spots Leo, a very talented and very handsome student. On a pact they decide to work together by painting intimate portraits of one another. Their chemistry and their passion works to quell Lena’s old feelings for her Greek Adonis, that is, until Kostos shows up at her door.

4. Tibby and Brian are in love. With the hopes of Brian coming to NYU in the following year to join Tibby, the two never doubt their future. But after a pregnancy scare, Tibby changes her tune and distances herself from Brian. After their break-up, Tibby sulks in her room with her only acceptable friend, the TV. When Brian begins to date Lena’s sister, well, Tibby realizes what she did and fears it’s too late to save their love.

Each girl has her own individual life now, but that doesn’t mean they are any less sisters.  The fear is that they will go on with their lives and drift apart, but the pants lead them to understanding. A tragic loss leads them to Greece, together, where they rediscover their friendship and its impenetrable bond.

GL EmilyElaine:  Who was your favorite sister?

GL EmilyElaine:  The drama in this book kept me reading.  Which situation worried you the most?  Evil Julia’s scheme?  Kostos or Leo?  Bee’s love affair with the professor?  Tibby’s pregnancy scare?

I think I worried the most about Lena.  I feel so awful about the circumstances of Kostos’ marriage.  His ex-wife was the bad one, he just tried to do right by her.  Even as she and Leo progressed, I kept longing for her to go back to Kostos. Even as the book is finished, I still want to know.

GL EmilyElaine:  The pants are gone. How do you feel about their disappearance?

I think it was necessary. I think the pants served their purpose and now they will find someone else to help.

GL EmilyElaine: Which Sisterhood book was your favorite?

I don’t think I can decide!  They were all sooooo good and sooooo addicting.  They each had their fantastic parts.

GL EmilyElaine:  How do the movies rate to the books?  Have you or are you planning to see the newest film?

I haven’t actually seen any of the movies, but it is difficult to capture books in film much of the time. You will inevitably miss something, but knowing that you can still enjoy the movie as is, even with the differences and established characterization and cinematography. And I do believe I will be hitting the rental shops and movies soon. Maybe I can drag my boyfriend with me; I mean everyone has to love the Sisterhood!

P.S Did you take the GL quiz? Which sister are you?! I was Carmen.

Next up? Breaking Dawn, by Stephanie Meyer! See you next week.