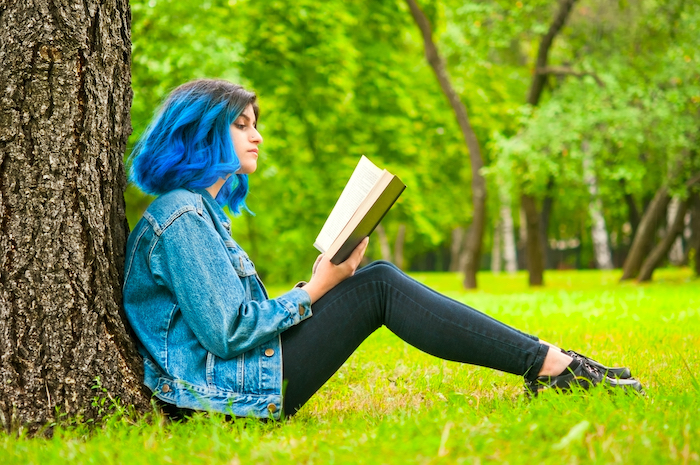 April 23 is World Book Day! While you're stuck inside, be sure to curl up in your sweats with some comforting tea and the *hottest* spring reads. We've got the ultimate adds to your 2020 TBR list below...

The Library of Lost Things by Laura Taylor Namey
Darcy is a literary genius who spends most of her time lost in a world of books, memorizing entire passages from her favorite novels. Plus, working in a bookstore helps her escape from issues at home, like her mom's compulsive shopping and hoarding problems. As her family faces eviction, Darcy's spirits are lifted by new boy Asher Fleet, a shattered teen pilot with a broken future. Suddenly, Darcy finds a reason to begin her own story.
Inkyard Press, $19

The Guinevere Deception by Kiersten White
In this twist on the classic legend of Camelot, we meet Princess Guinevere, who has come to the castled city to marry King Arthur. But this raven-haried, horseback-riding heroine is actually a changeling who was sent by the great wizard Merlin to protect the king—and Camelot—from enemy attack.
Delacorte Press, $19

Salty, Bitter, Sweet by Mayra Cuevas
Aspiring teen chef Isa has just lost her beloved abuela, her parents have divorced and now she has to move to France with her dad and new stepmother. A silver lining appears when she lands a prestigious apprenticeship with a famous French chef. As Isa seeks a new start, she struggles to keep up in the kitchen—and is thrown by the arrival of the gorgeous Diego and his dog. Packed with delicious drama, you'll eat this book up—and want seconds.
Blink, $19

The Beholder by Anna Bright
As the ruler-in-waiting of the land of Potomac, 18-year-old Selah must marry a man who will help her lead. And after a humiliating—and unsuccessful—public proposal, Selah's stepmother sends her on an ocean voyage around the world until she finds her perfect match. Soon, Selah discovers dangerous secrets and experiences deception—but very little love. Fortunately, Capt. Lang and his crew offer unexpected help—and some seriously swoon-worthy moments at sea.
HarperTeen, $18

The Fountains of Silence by Ruta Sepetys
With a love of photography and a mission to connect with his mother's birth country, Daniel heads to Madrid, Spain, circa 1957. His journey leads him to Ana—and a dark side of the sunny city. A powerful story taking place during a little-known time with unforgettable characters, this story will have you swooning, as Daniel and Ana stand together for what's right despite deadly situations.
Philomel, $19

Crying Laughing by Lance Rubin
First, aspiring comedienne Winnie Friedman flops royally at her own bat mitzvah. Then, when her father gets sick, Winnie finds the humor seriously lacking. But when the class clown invites Winnie to join the improv team, she realizes that humor is all she needs—especially when life isn't so funny.
Knopf BFYR, $18

City Spies by James Ponti
After hacking into the New York Juvenile System Justice Base to expose her corrupt foster parents, Sarah Martinez faces years in juvie—without her computer. But her coding skills lead to her rescue—and her recruitment to a secret spy organization. The group uses kids to go where adults can't, like the International Youth Summit in Paris. Juvie may have been easier, because now Sara has to save the world with an erratic team of tech-savvy, know-it-alls just like her.
Aladdin, $18

A Girl, A Raccoon, and the Midnight Moon by Karen Romano Young and illustrated by Jessixa Bagley
Bookish and socially awkward, Pearl is on a mission to save the Edna St. Vincent Millay Library, where her mother is a librarian. Closure seems certain after someone steals the head of Edna's famed statue, but Pearl finds unexpected help from a new friend, a possible first crush and a group of literature-loving raccoons who live in the bookstacks. Hilarious and brilliant, you'll be rooting for Pearl as she fights to keep what she loves most.
Chronicle, $17

The Kingdom of Back by Marie Lu
Fantasy meets alternate history in the story of Nannerl, Mozart's sister who dreams of becoming a famous composer herself—an impossibility for a girl in the 18th century. Though wildly talented, once married off, Nannerl can never perform again, so she strikes a deal with a mysterious and magical stranger. It proves to be a deal with hidden costs.
Putnam's Sons BFYR, $19

The Monster Hypothesis by Romily Bernard
Super smart Karis "Kick" Winter lives in small town Bohring, where there are more alligators than people—and where her grandma pretends to be a psychic. Struggling to fit in at school, Kick claims to be psychic, too, which helps boost her popularity—but also throws her into the center of a mystery when two kids go missing and everyone blames a 100-year curse. The town turns to Kick to help save them from the curse, while she turns to science to debunk it as a hoax.
Disney-Hyperion, $17

They Went Left by Monica Hesse
Expect to laugh, cry and crave more in this amazing story of 18-year-old Zofia Lederman. She's a World War II survivor who sets out on her own in search of her young brother, Abek. Reconstructing the pieces of her life is a mysterious puzzle as she travels through her home country and beyond. Along the harrowing journey, she meets a cast of young people in similar situations. You'll soak up the story, the characters and the gorgeous prose.
Little, Brown BFYR, $18

Pet by Akwaeke Emezi
Jam lives in the town of Lucille, which paints itself as "perfect" with no crime, hatred or abuse. Turns out the bad guys (aka "monsters") haven't been driven away—they're just hiding. When a creature called Pet pops out of a painting by Jam's mom, the pair go off to hunt a human monster—one who's threatening the home of Jam's best friend, Redemption.
Make Me a World, $18

When You Trap a Tiger by Tae Keller
When Lily and her family move in with her sick grandmother, the gigantic, orange, glowing tiger from her "Halmoni's" folk tales arrives. After finding out that her grandmother stole from the tiger long ago, Lily makes a deal that in return for Halmoni's health she'll return the stolen item. But it takes a ton of courage to face a tiger—and restore her family's magic.
Random House BFYR, $17

What are you reading on World Book Day? Comment below!